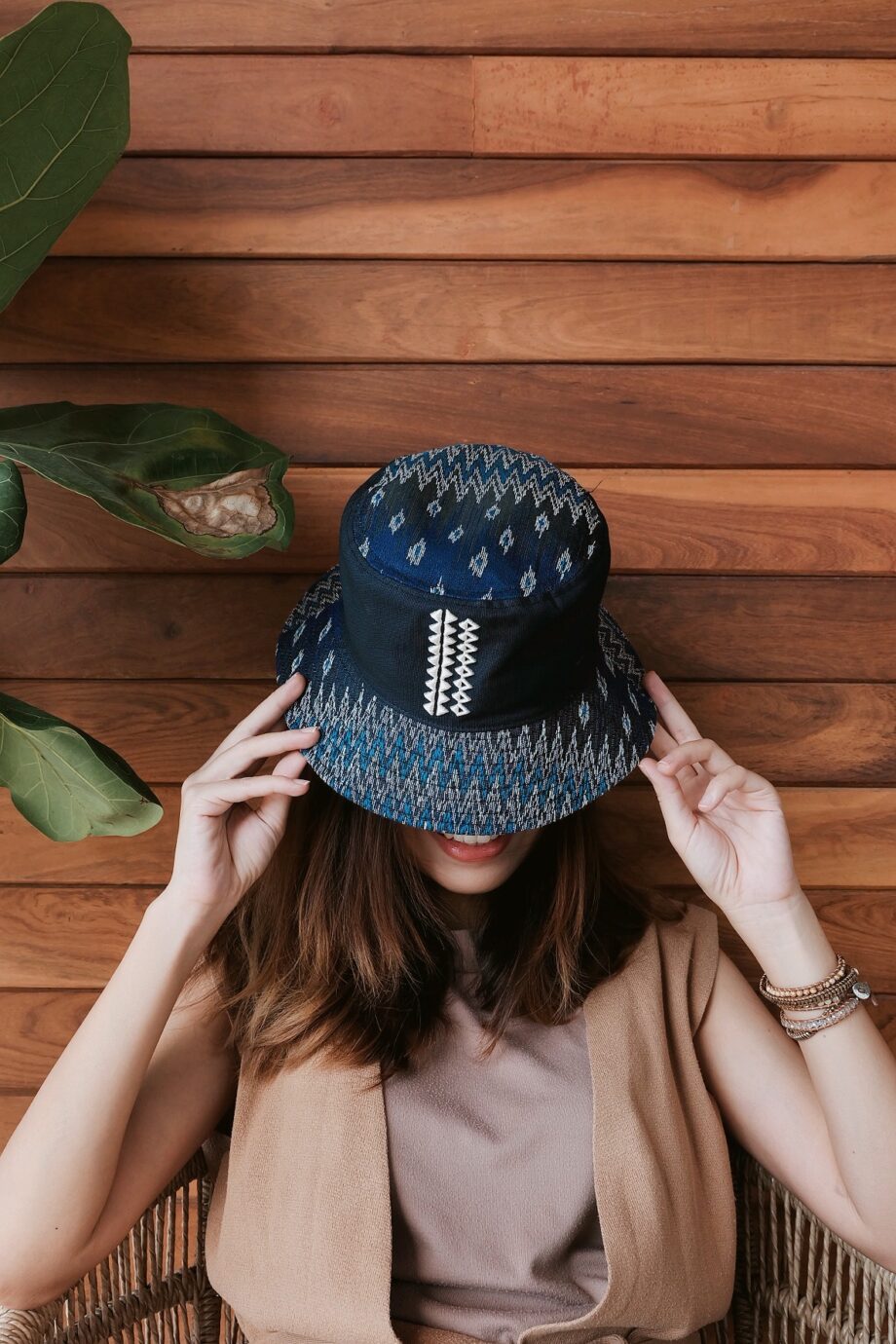 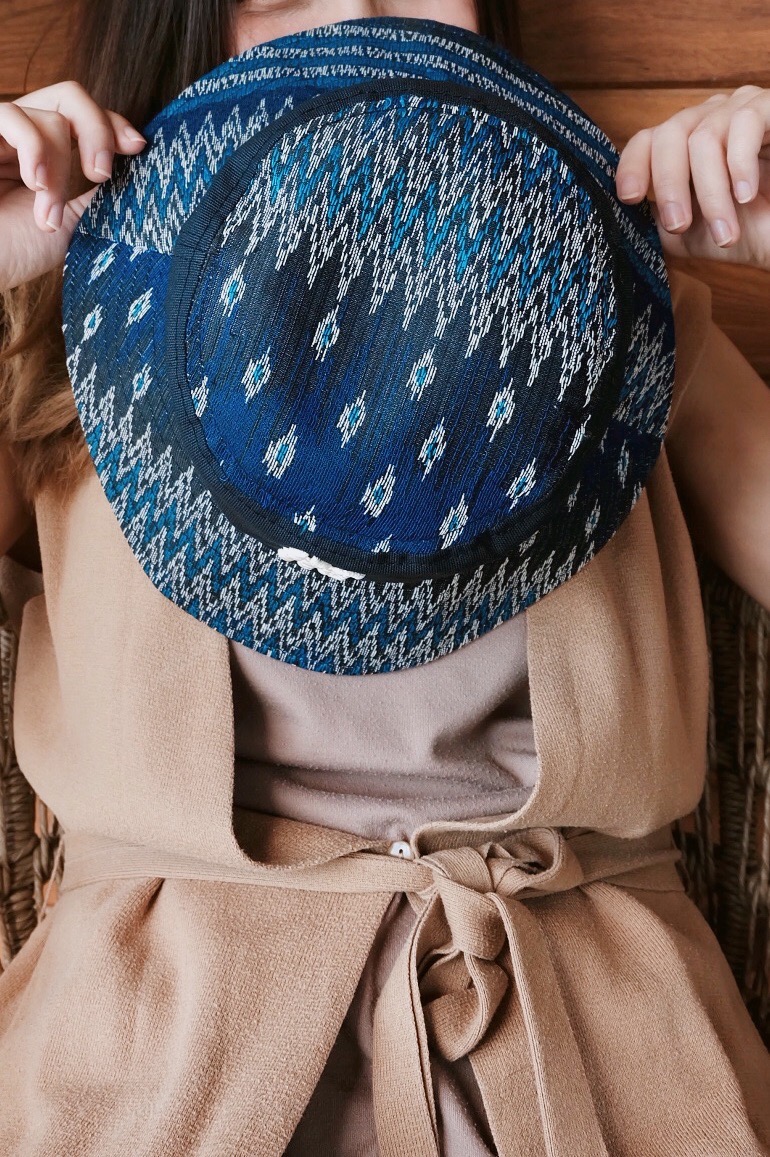 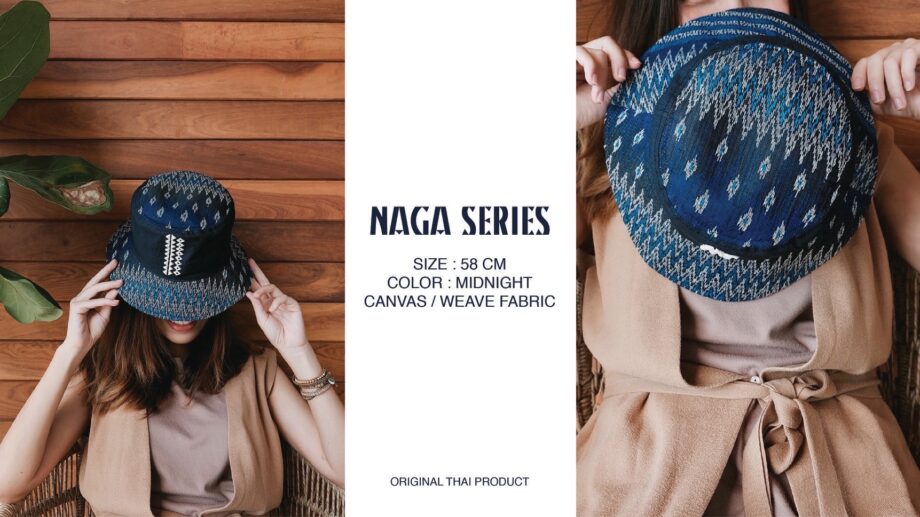 Are you looking for a cool gift that add Thainess style perfectly to it? If yes we offers…

Zhowcase presents an embossed bucket hat on the front. Mole fabric that represents the uniqueness of Naga fabric and brightens with white color to add charm to make the product look modern, not out of trend, can be worn anywhere, cool!!!

ZHOWCASE is known as a brand of textile products that combine handicrafts with modernity. Capturing Thainess in a new design, adding graphic patterns to create a new image for products with a Thai aura. Along with applying design to create products that are charming, easy to understand, beautiful, but hidden with Thai values and meanings. This summer, a chic Thai-style hat from ZHOWCASE would be another must have! A hand-woven, brilliant red hat with a brim that can be folded up and a shape that doesn’t wrinkle is made from naka fabric. The front pattern is embroidered embossed.

Thai numbers were chosen as a pattern by the “Zhowcase” scarf company’s owner which Makes the item more unique. The hats from this firm are well-made with silk that is imported from Spain. The material is nice and sparkly. Additionally, this fabric can be personalized per customer request by adding a name on a scarf for a gift. “Kulcharee Siangyen,” who was inspired by the allure of Thai numbers while writing a thesis before graduating, is credited with creating the brand. It is used in a graphic design project in a variety of patterns, giving it a Thai feel that is lovely, delicate, and contemporary. Therefore, do not hesitate to pick up the idea as soon as you decide to build your own brand.

The owner of the brand “Zhowcase,” a stunning woman named Mr. Siangyen (Cho), claimed that the idea for this branding had been brewing ever since he was a university student majoring in technology. based on her own personal notion that I want to work with the origins of true Thainess. I eventually came up with the concept of combining Thai numbers to create a pattern after giving it much thought. She remarked, “To experience love in a flash, as soon as this picture appeared, Mr. Cho.”

I still think that the Thai number pattern is something that is so beautiful that it should be able to do more than I have ever done, even if the thesis work was finished and Mr. Cho fell in love with his work. She painted the design on a t-shirt at that time then first try to sell it The outcomes demonstrated that the response was excellent.

What is Naga Fabric

While the majority of today’s textiles are made with acrylic wool purchased from the neighborhood market, historically all Naga textiles were woven on the back strap loom using handspun cotton, eri silk, or native nettle and bark fibers.

Traditional Naga textiles are characterized by red, black, and white stripes, dramatic geometric patterns, and figurative depictions of spears, animals, heads, and people. After weaving, many items are decorated with beads and cowrie shells, with each element of the pattern expressing the pride and grandeur of the tribe.

ZHOWCASE – The charm of Thai numbers on the fabric

The heart is the heart of the ZHOWCASE brand Zhowcase was started from combine Thai traditional graphic design, especially Thai number with creating unique patterns on textile. So, all products present themselves how beautiful Thai is Zhowcase is for everyone who love Thailand. Identity of Zhowcase is creating a new personality that reflects modern Thainess.

The digits of “Zhowcase” will be Thai numbers. In addition, while using Arabic placement techniques like stripes, cube patterns, and round patterns, Thai numbers will add fresh inventiveness. The Thai number, which is crucial, will be the number displayed on the computer’s front without any distortion or increase-decrease f rom this point on, differentiating “Zhowcase” from competitors has become a strong point  because there may have been some Thai number design work. However, no one has developed a pattern for Thai numbers the way that ‘Zhowcase’ has done so far. “The highlight of ‘Zhowcase’ besides the design of Thai numbers as a pattern In addition to this in the design, it has also expanded the idea of ​​the work by picking up Thai patterns from various sources for instance, suppose you wish to create a vibrant line. I’m going to Wat Pho to get inspired, considering that Wat Pho is an ancient temple that blends Chinese and Thai aesthetics. It differs beautifully from Wat Phra Kaew as a result in order to possess classical beauty. Also in the design Cho will see from the tile pattern in the reign of King Rama V, which is often a pattern of flowers or designs of eaves. These stencils are already beautiful. or pattern on the Sarong, we take the design and put the color through the Adobe illustrator program again. When finished, it will be printed on a t-shirt. /tank top/scarf, which Cho is confident that all the custom designs make the brand different from others.

Another highlight of ‘Zhowcase’ is that it is a mole tone work. Because the true color of Thailand is the color of mole, there are no bright tones such as red, it is vermilion, gray is mist, green is horsehair, etc., which is why ‘Zhowcase’ has been inspired to use almost all tones of mole. At the same time, there may be a fresh color to cut one color. This is to elevate the work to make it look modern and not outdated.

T-shirts, tank tops, and scarves are the primary items produced by “Zhowcase.” consumers. As a result, Khun Cho has a method for determining the pricing based on the cost of the scarf’s fabric and printing because the purpose is to produce artistic work in repay for Thailand, there is no design cost charged in addition to the shirt painting fee. Even if it’s only a little issue.