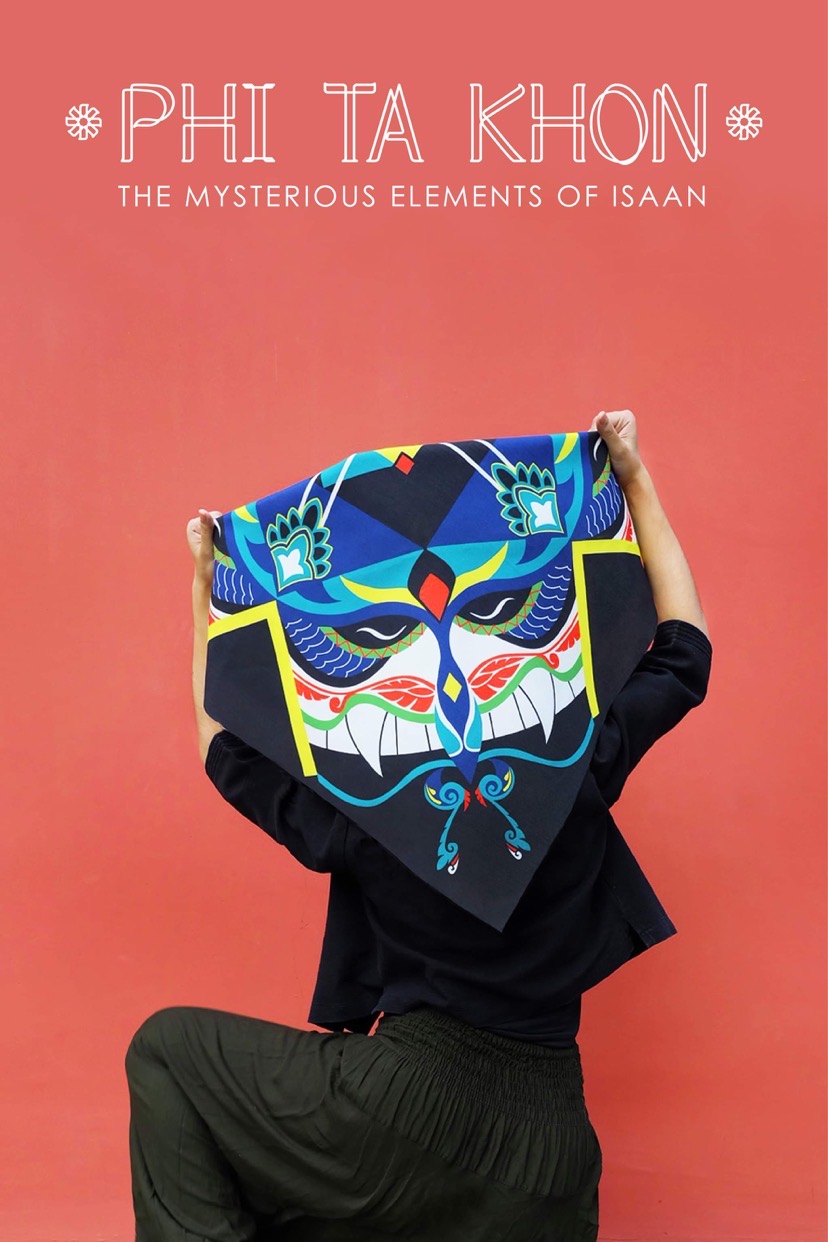 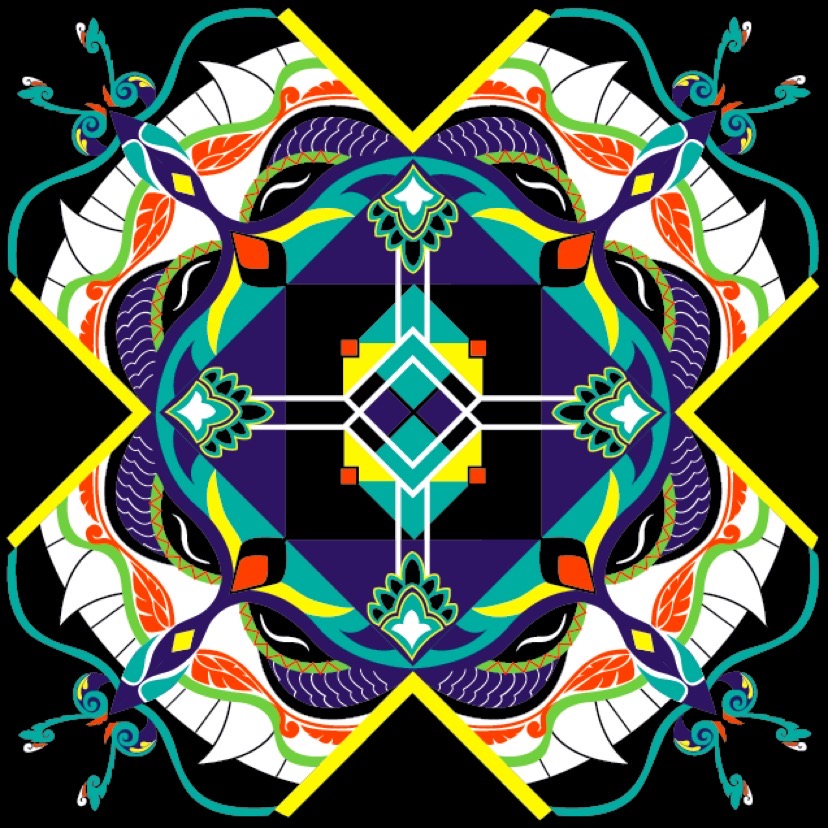 Are you looking for a fantastic gift that truly embodies Thai style? If so, we provide…

Thailand is represented by “Phi Ta Khon pattern” embroidered on a scarf by Zhowcase. A fabric with a soft and smooth touch embodies the distinctiveness of Thai colors and adds brightness with vibrant hues to give the item charm and make it look trendy and not out of style and may be worn everywhere. Everywhere you go, it’s awesome!

ZHOWCASE is known as a brand of textile products that combine handicrafts with modernity. Capturing Thainess in a new design, adding graphic patterns to create a new image for products with a Thai aura. Along with applying design to create products that are charming, easy to understand, beautiful, but hidden with Thai values and meanings.

Scarves that can match any style from Spanish silk. The texture is shiny and reflects light. The fabric is soft and smooth to the touch and not too heavy and they have unique colors. The owner of the scarf company “Zhowcase” chose Phi Ta Khon as the inspiration for the pattern because Phi Ta Khon conveys Thainess well by blending cultures to create a unique scarf. Which has selected silk from Spain because of the shine and reflection of light very well, the fabric is soft and comfortable to the touch. In addition, this fabric can be customized according to customer needs by adding a name on the scarf as a gift.

What is Phi Ta Khon

Phi Ta Khon is a festival held in Dan Sai District, Loei Province, located in northeast Thailand. It usually takes place over three days at some point between March and July and is held on the day chosen each year. By the city people this traditional folk merit event is called Boon Luang.

Phi Ta Khon, formerly known as Phi Ta Khon, is a festival that was influenced by the Maha Vessantara Jataka. Jataka in Buddhism that about Phra Vessantara and Queen Matthew will travel out of the forest back to the capital The beasts, including the ghosts that live in the forest, have come out to send the King with mourning, which will be the first day of Phi Ta Khon festival which is called today as the day together (One Home)

The tradition is still believed to be For those who play or are dressed as Phi Ta Khon Yai, must remove all Phi Ta Khon Yai costumes and dispose of them in the Barren River. Do not bring them home. It is to leave misery and bad things aside. And wait until next year to play again

The owner of the brand “Zhowcase,” a stunning woman named Mr. Siangyen (Cho), claimed that the idea for this branding had been brewing ever since he was a university student majoring in technology. based on her own personal notion that She want to work with the origins of true Thainess. She eventually came up with the concept of combining Thai numbers to create a pattern after giving it much thought. She remarked, “To experience love in a flash, as soon as this picture appeared, Mr. Cho.” She still think that the Thai number pattern is something that is so beautiful that it should be able to do more than She have ever done, even if the thesis work was finished and Mr. Cho fell in love with his work. She painted the design on a t-shirt at that time then first try to sell it The outcomes demonstrated that the response was excellent.

ZHOWCASE – The charm of Phi Ta Khon on the scarf

The heart is the heart of the ZHOWCASE brand Zhowcase was started from combine Thai traditional graphic design, especially Phi Ta Khon with creating unique patterns on textile. So, all products present themselves how beautiful Thai is Zhowcase is for everyone who love Thailand. Identity of Zhowcase is creating a new personality that reflects modern Thainess.

The successor of “Zhocase” will be the Phi Ta Khon. In addition, using line alignment techniques such as stripes, cube patterns and round patterns, will add fresh creativity that is different from competitors, becoming a strength because there may be work. design. However, no one has developed a pattern from Wat Arun like Zhocase has done until now. “The highlight of “Zhowcase” besides the design of Phi Ta Khon as a pattern In addition to this in the design, it has also expanded the idea of ​​the work by picking up Thai patterns from various sources, for instance, suppose the owner wishes to create a vibrant line. She would go to Wat Pho to get inspired, considering that Wat Pho is an ancient temple that blends Chinese and Thai aesthetics. It differs beautifully from Wat Phra Kaew as a result in order to possess classical beauty.

Also in the design, Cho will see the tile pattern in the reign of King Rama V, which is often a pattern of flowers or designs of eaves. These stencils are already beautiful. or pattern on the Sarong, we take the design and put the color through the Adobe illustrator program again. When finished, it will be printed on a t-shirt. /tank top/scarf, which Cho is confident that all the custom designs make the brand different from others.

Another highlight of ‘Zhowcase’ is that it is a mole tone work. Because the true color of Thailand is the color of a mole, there are no bright tones such as red, it is vermilion, grey is mist, green is horsehair, etc., which is why ‘Zhowcase’ has been inspired to use almost all tones of mole. At the same time, there may be a

T-shirts, tank tops, and scarves are the primary items produced by “Zhowcase.” The selling price will be the one that has been determined specifically for Thai consumers. As a result, Khun Cho has a method for determining the pricing based on the cost of the scarf’s fabric and printing because the purpose is to produce artistic work in repay for Thailand, there is no design cost charged in addition to the shirt painting fee. Even if it’s only a little issue.