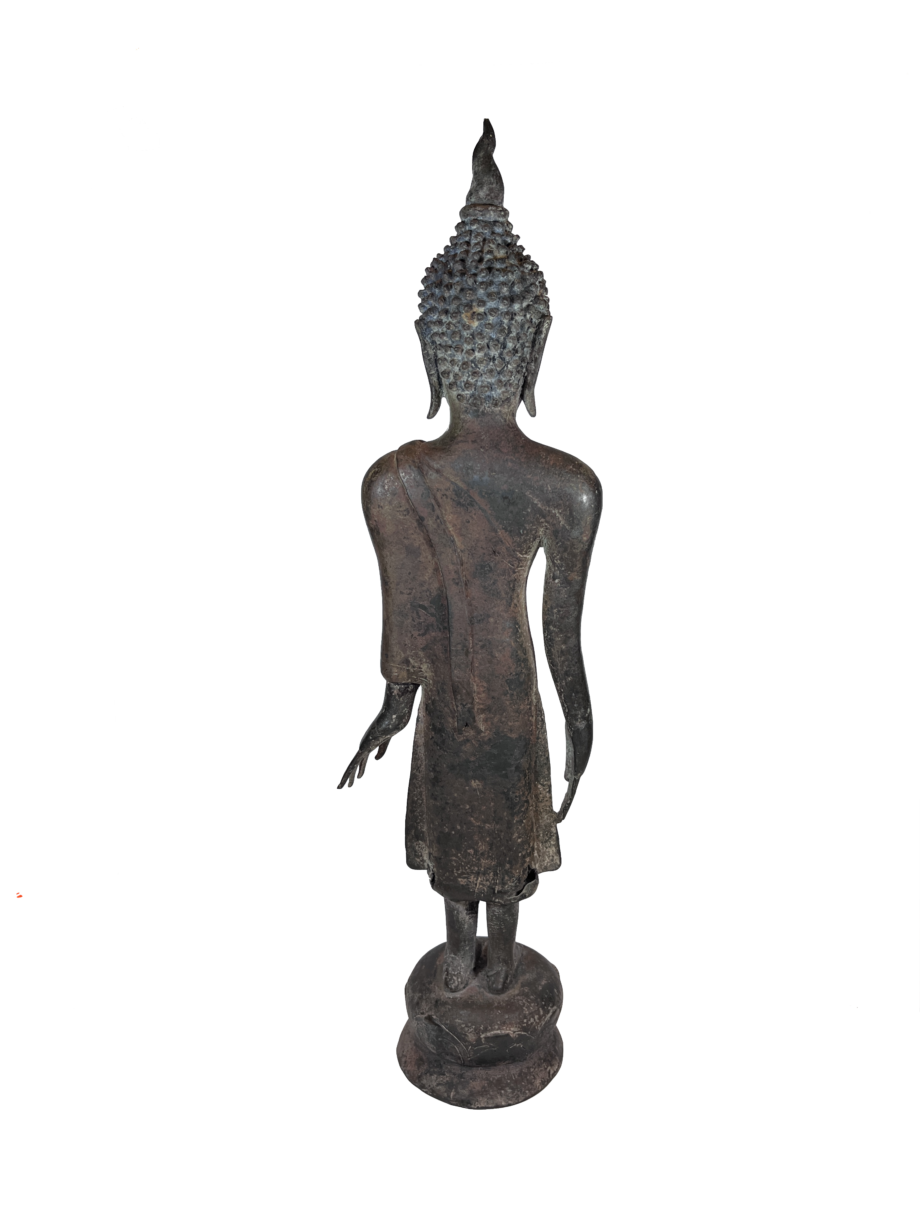 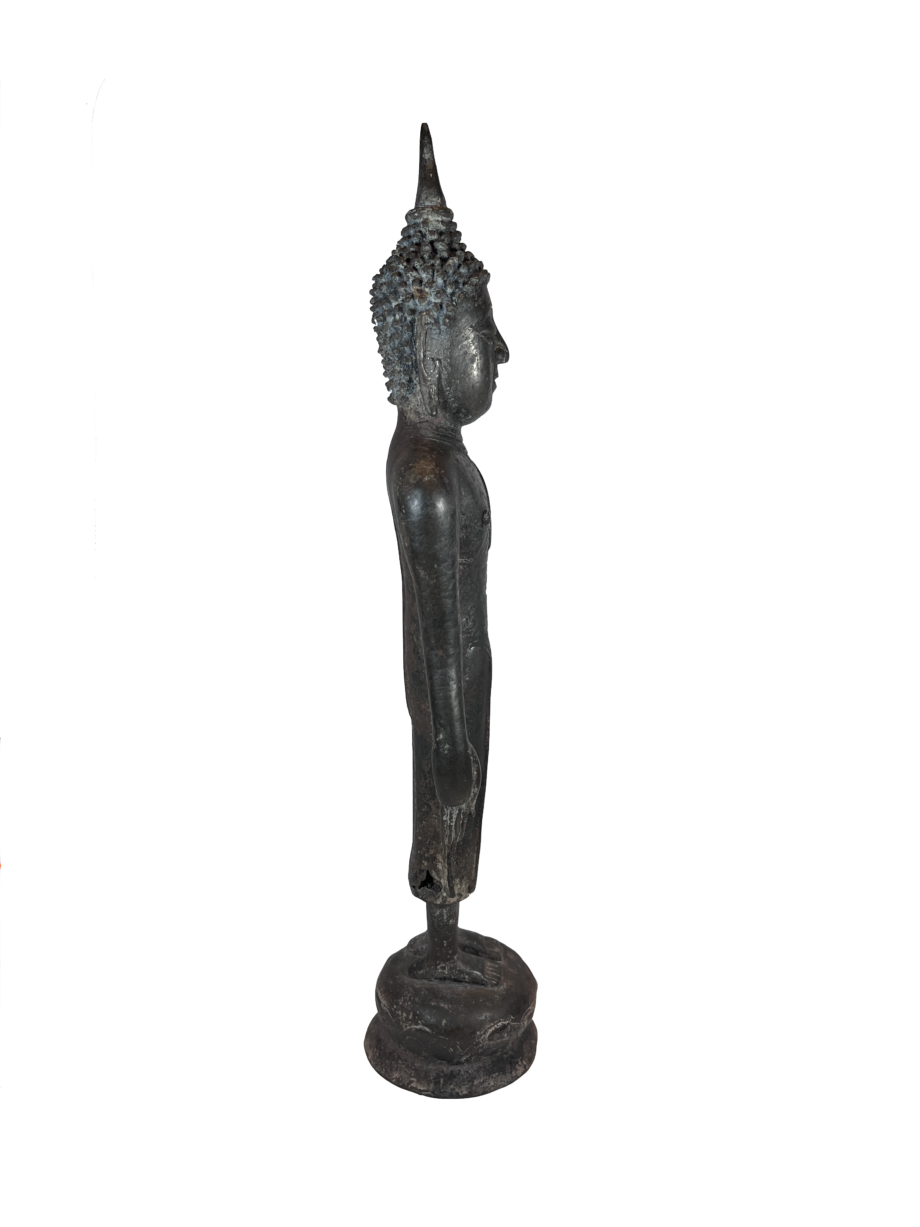 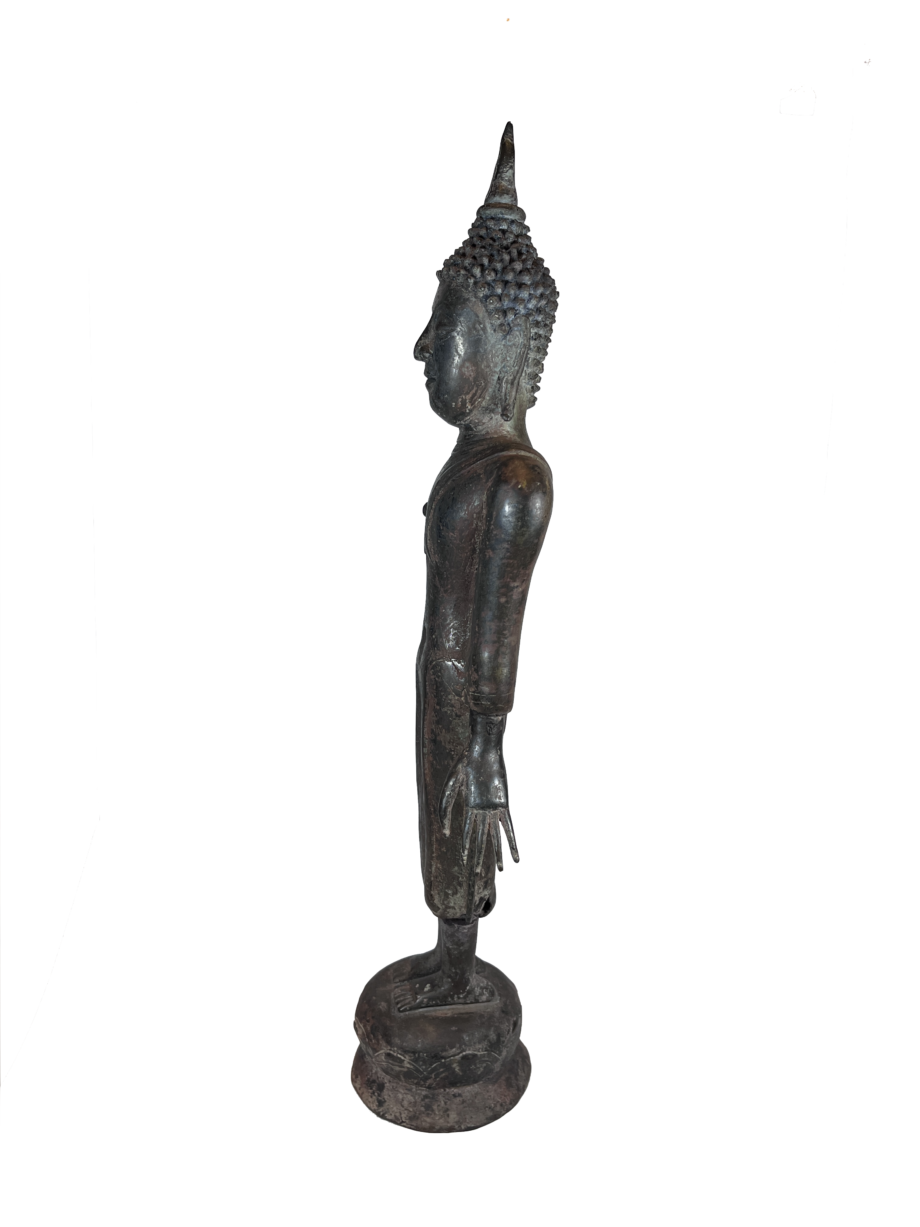 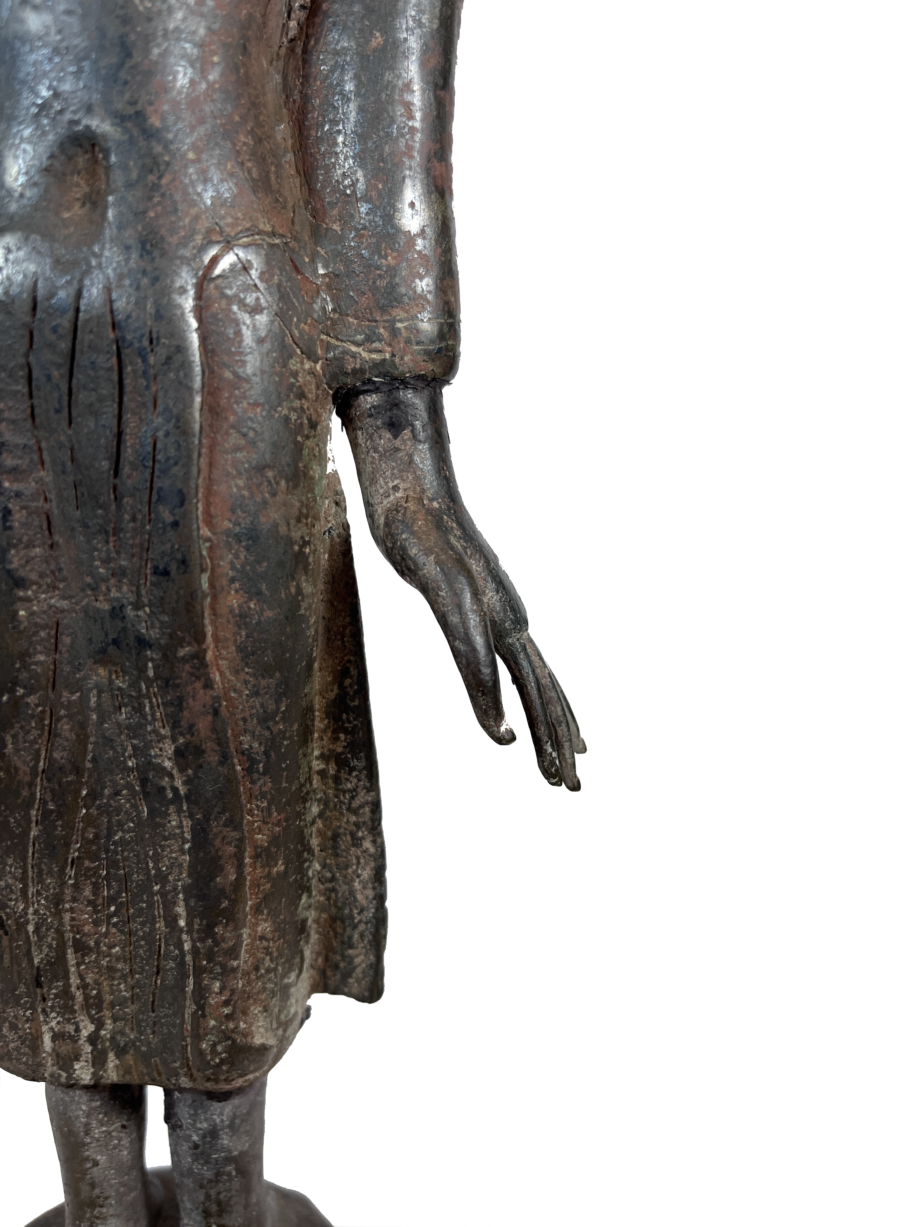 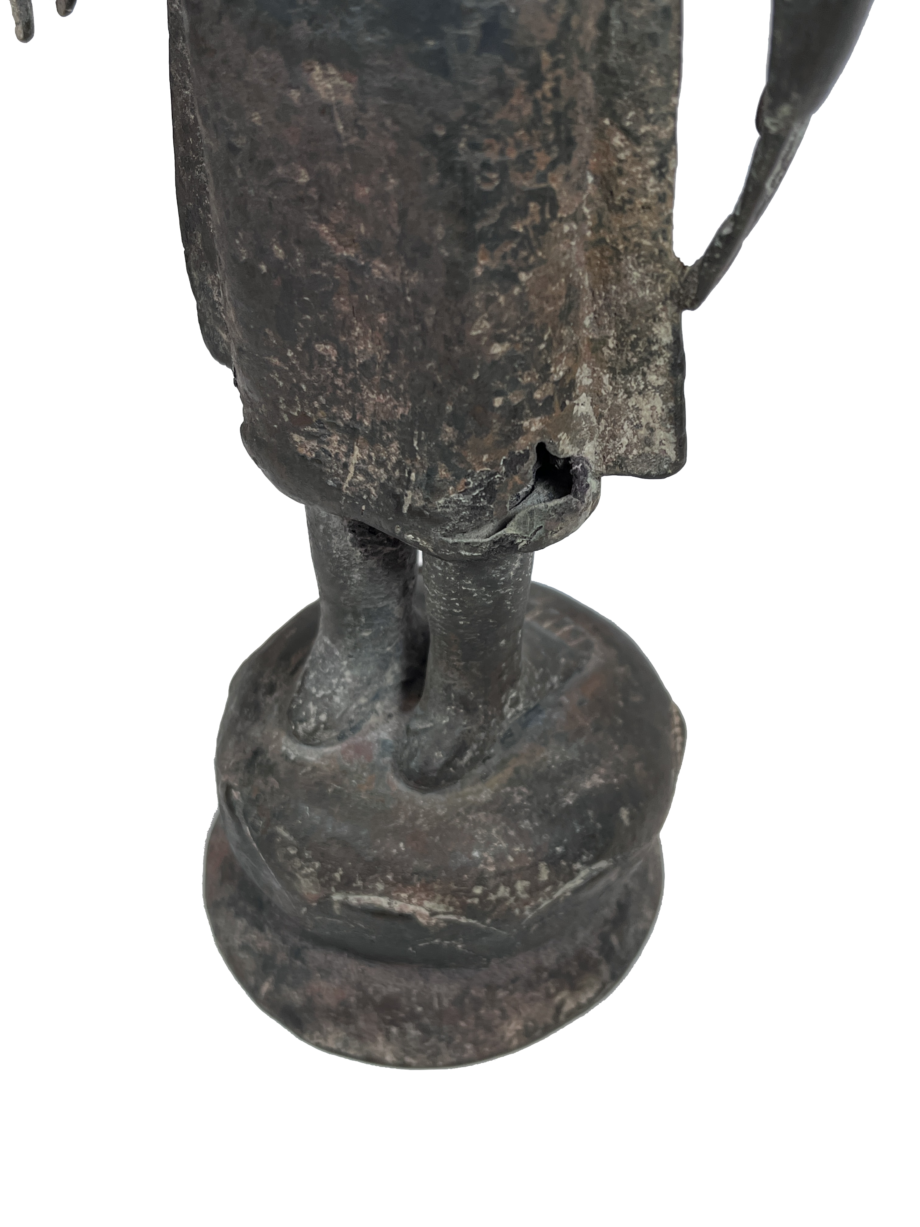 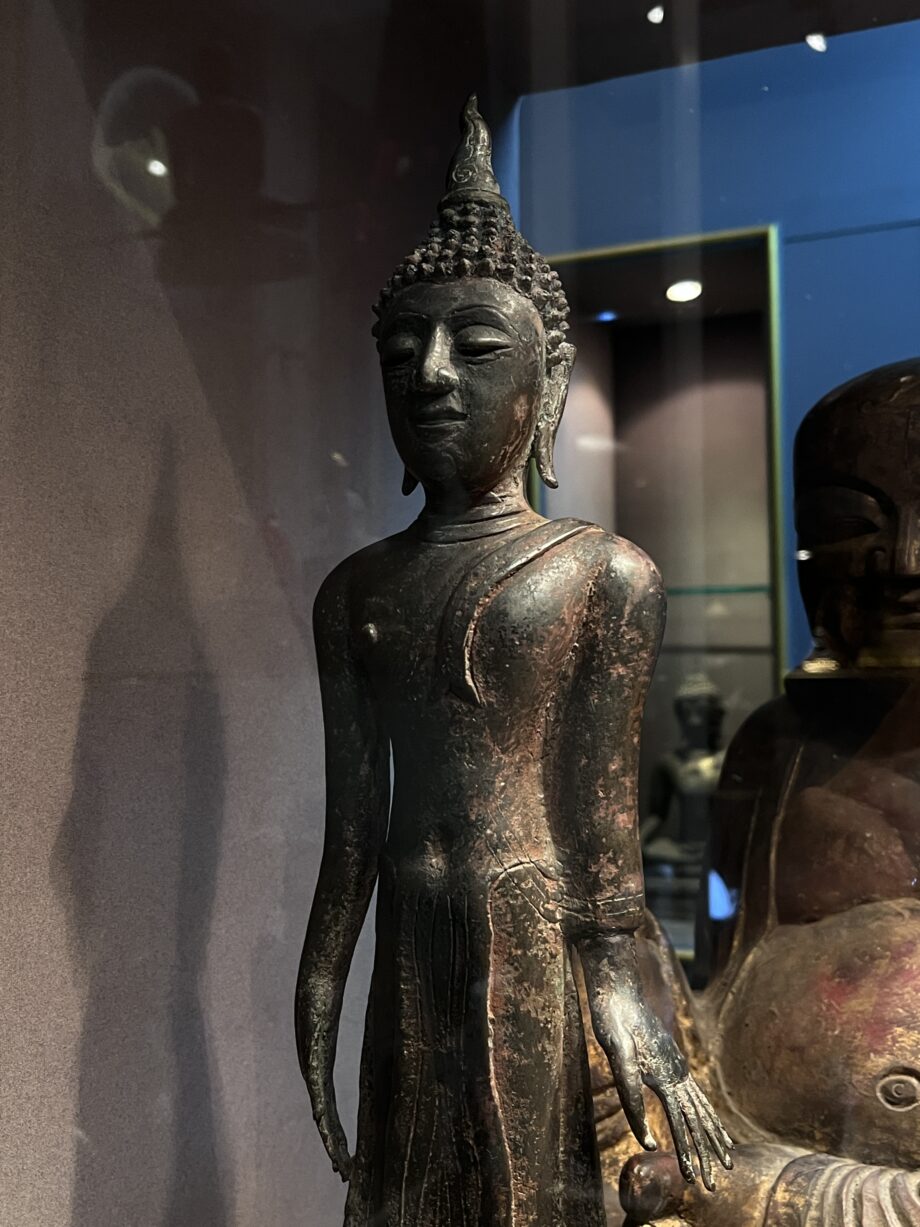 This Thai bronze Buddha Statue was made during Chiang Sean or Lanna period which refers to Northern Thailand Kingdom during 12th-21th century. Lanna, meaning a million rice fields, was one of the magnificent period of North before it was taken over by Siam. Lanna has a rich culture that included cuisine, a gorgeous old wooden home, and a Buddha statue.

The Lanna Buddha Statue has its own unique style such as round face, slightly smile, Knotted chin and round hair form.  It is “Very rare and unique, only one piece!”

River City Bangkok (Thailand)’s Premier Centre for arts and antiques founded in 1984, guarantees the authenticity of all antiques as mentioned.

This ‘one-of-a-kind’ 600-year-old bronze Buddha Statue was created during the Chiang Sean or Lanna period, which refers to the Northern Thailand Kingdom from the 12th to the 21st centuries. Lanna kingdom has its long history and its own uniqueness of style. “What makes this antique statue more interesting is its gentle hand moving posture making it look like a living Buddha!”

What is Chiang Sean or Lanna Buddha style?

If you go around Chiang mai, Chiang Rai, Nan or Lamphun you would see a lot of Thai temples and Buddha Statues. Have you ever wondered what distinguishes Lanna style from other Thai styles? When compared to other South Asian statues, the style of this Thai Buddha statue is absolutely distinct. Therefore there are many curators in the world who are fond of collecting these statues. We can say the Thai antique and amulet market is very competitive! Don’t miss a chance to get one before out of stock!

“Khummeaungnuea” has been opened for almost 10 years by “Veerachai Chaicharoen” . The story started since Veerachai was a teenager. He has an interest in the amulet, Pendant and Buddha Statue. From his interest into expert. He become more wildly popular  in Northern Thailand as “Joke Lumphun” and started his own antique and amulet association in order to inherit Thai antique and amulet.