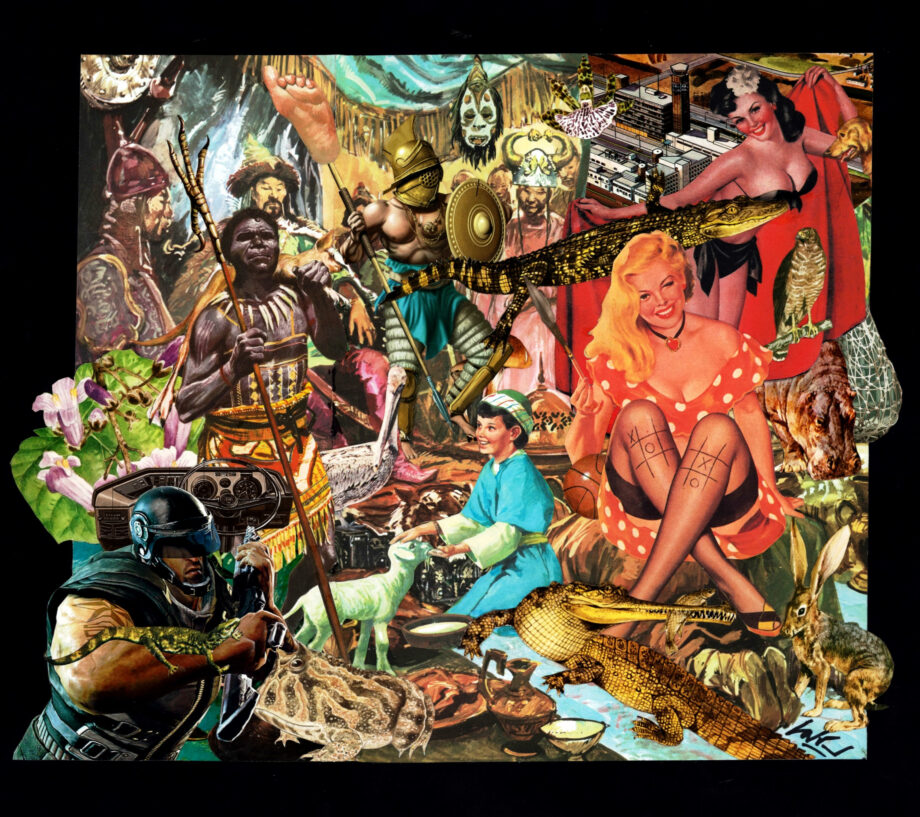 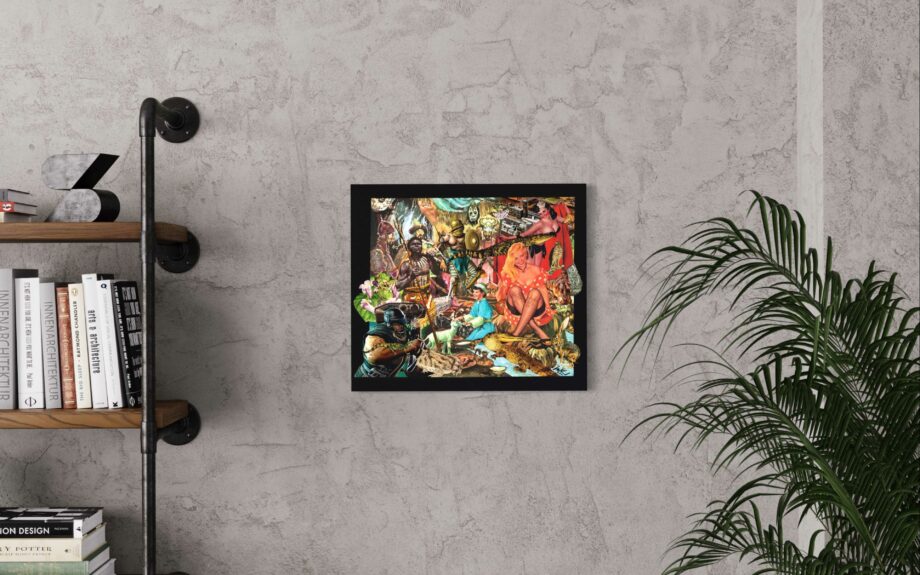 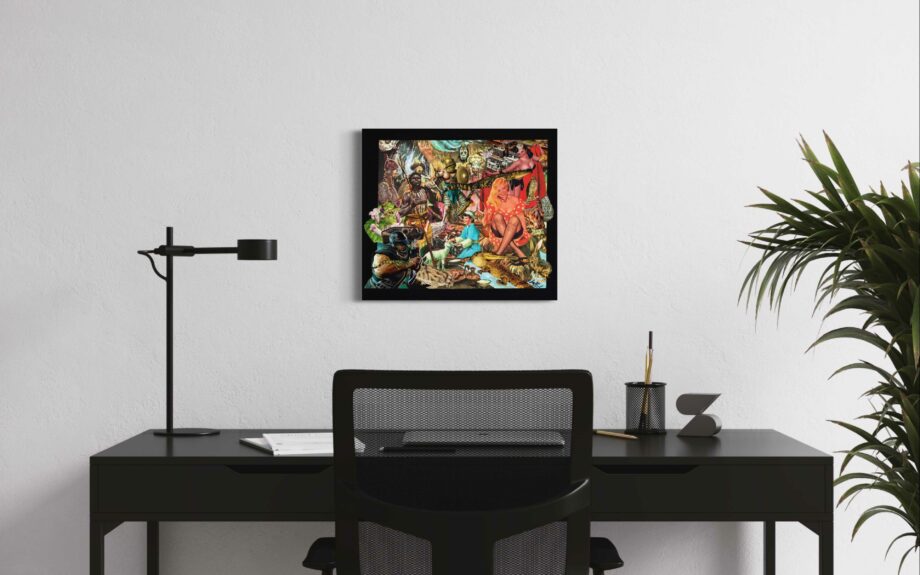 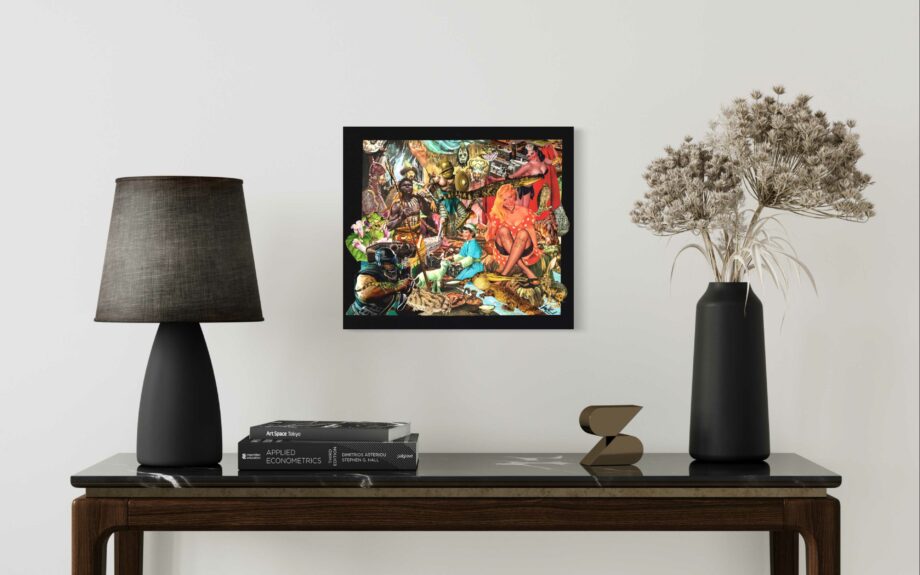 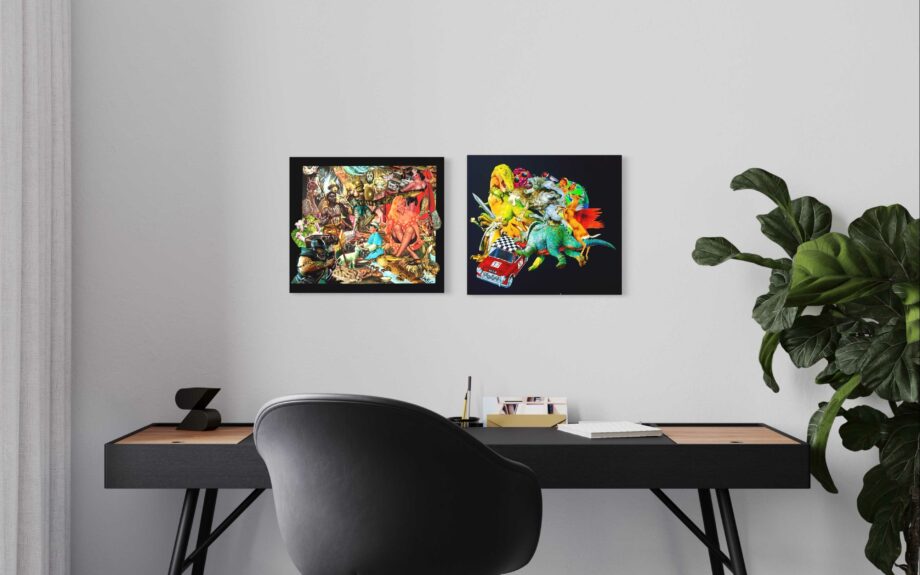 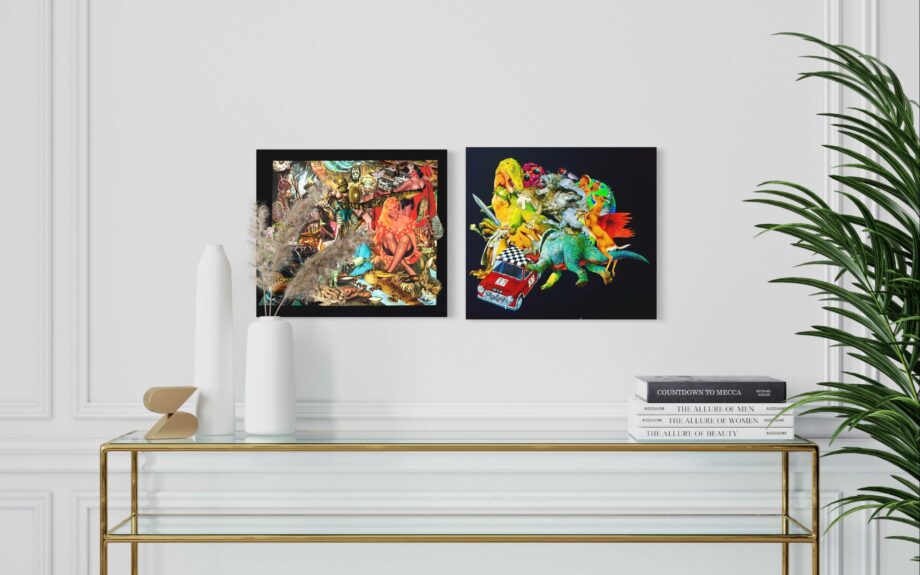 Almost all of his Artwork is handcrafted! Brought out of second-hand books, each piece creates a new surrealistic scene with a hidden sarcastic & dark humorous tone, involving a variety of characters and objects from various cultural sources to create and differentiate the entire context, scenery, and mood in bright, vivid, and tacky colors with lots of detail!

His collages are distinctive and have a signature look since they have been re-edited and merged together wonderfully!

Only one piece for each collage, cannot be duplicated!

Double O Seth” or “Sethapong Povatong” is a Thai artist who works on graphic design, designing clothes with the brand La La Love and always working on collages. His illustration works consist of old pictures from various publications, his works can still be described as weird, sexy and pop. These images do not tell a straightforward story, but rather allow the collage to work with the viewer’s imagination. Almost every piece of his Collage is handcrafted! Each pieces make its new surrealistic scene with hidden sarcastic & dark humorous tone involving a lot of characters and objects from numerous cultural sources to created and differ the whole context, scenery and mood in bright, vivid and tacky colours with many details which he brought out from second-hand books from second hand shop he found! Re-edited blended together perfectly make his collages has uniqueness and signature style! Only one piece for each collage and cannot be reproduced.

Sethapong Povatong known as Double O Seth uses collage technique to make the new surrealistic scenes with hidden sarcastic & dark humorous tone involving a lot of characters and objects from numerous cultural sources to created and differ the whole context, scenery and mood in bright, vivid and tacky colours with many details which is his unique signature style. Sethapong Povatong is also an instructor and a guest Lecturer at 9 top institutions and universities in Thailand on various art and design modules. Get to know him more deeply!

Graduated with a bachelor’s degree at the Faculty of Art Education, Chulalongkorn. Later on, he started working in a graphic agency for 2 years. After 2 years working he decided to study for a master’s degree for Communication Arts, majoring Printing Design at Central St. Martins, London and he got a Certificate in Illustration at the Chelsea College of Art & Design, while also freelancing at big design firm at Minale, Tattersfield & Acton.

After he graduated from abroad Sethapong returned to Thailand. He became a lecturer in Typography at Rangsit University and in Graphic Design at Bangkok University. He also did freelance work in graphic design for music industry related to CD covers, tapes, posters.

Later on, Bakery Music Record invited him to work full time as an Editor of Katch magazine. Continuously, he kept mainly worked for Editor magazines such as Mono, Arena, FHM, while working on collages. Both in the form of commercial work and personal art since 2001, which Nittayasan closed, he came out as a full-time artist.

Double O Seth or Sethapong has his works published in Thai and international books and magazines. He has made a solo work book released in 2005 and he was selected by Dazed & Confused, a Japan magazine as one of the 80 best artist inspire books and was also selected as one of the Thai artists in the Asian Creative book 2013. Likewise, he has also performed in solo and group events several times both in Thailand (BACC, Jam, Jam Factory, CTW, Art Gorilla, Reading Room, Jamjuree Art Gallery, CACC Chiang Mai, etc.) and abroad (England, Italy, Switzerland, Japan, United States of America). Brazil) from 2006-2022

At the moment, Sethapong Povatong is currently working  as a graphic designer and clothing design with La la Love Brand. However he keeps making his passion “Handmade Collage”.