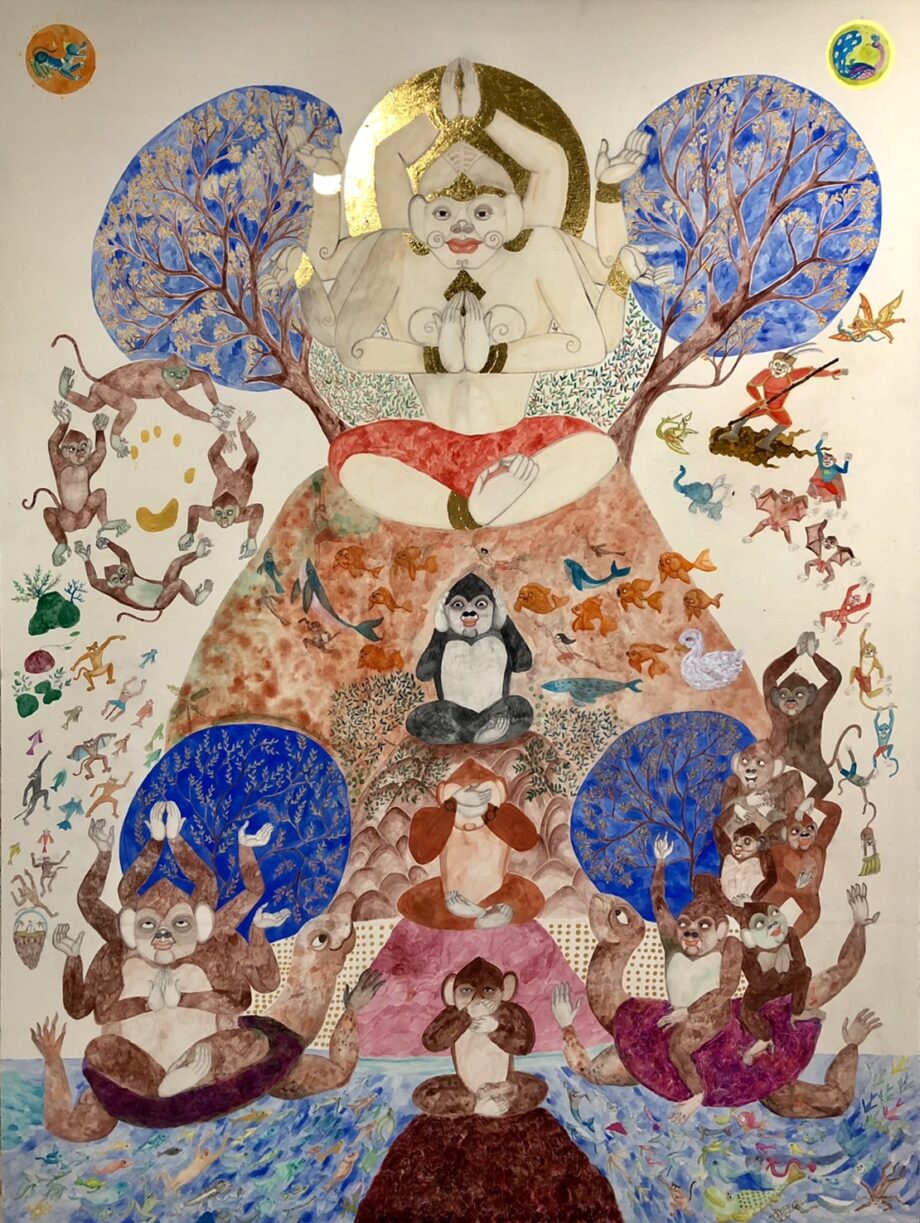 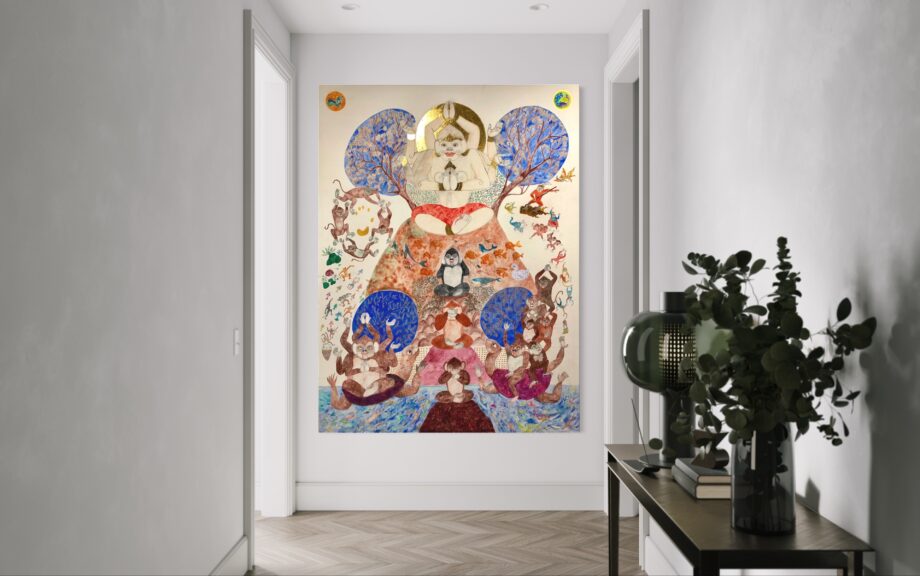 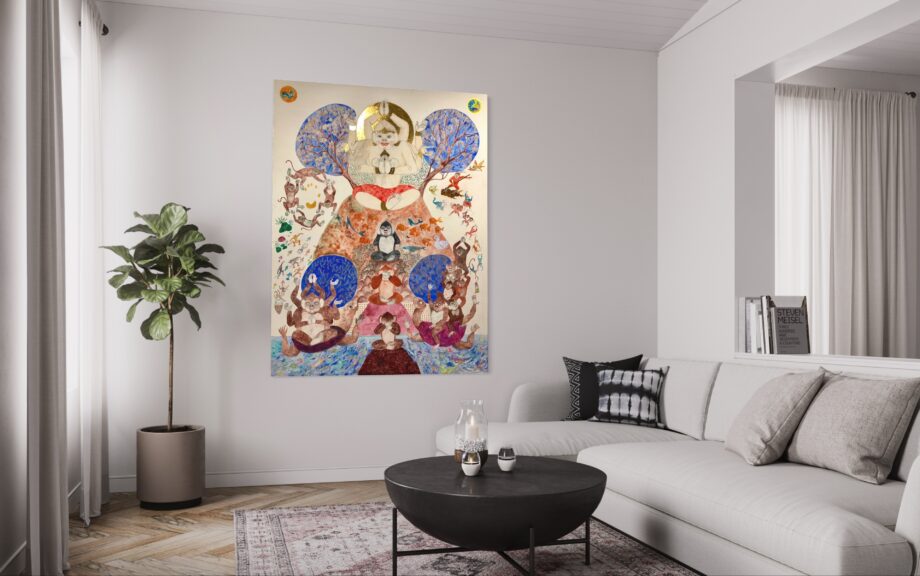 Hanuman, in Hindu mythology, the monkey commander of the monkey army guarding Rama while his 14 years of exile. Hanuman is upheld as a model for all human devotion. Making Hanuman is warship amongst people and also a popular figure that many temples have been erected for his worship.

‘Panuwat Kamdee’ or Pay received a Bachelor’s degree from Faculty of Arts and Architecture, majoring in Thai Arts, Rajamangala University of Technology Lanna. As new generation Lanna’s people who has appreciated his northern local culture, he has developed his art obsession and skills aiming to deliver to people in more comprehensible way.

About the Artwork : Hanuman

Hanuman, in Hindu mythology, is the monkey whose is the child of a nymph by the wind god. His well known for possessing enormous strength, keen intellect and a mastery over the Vedas and other branches of learning.

In the great Hindu Sanskrit poem the Ramayana or “Rama’s Journey”, Hanuman is commander of the monkey army guarding the royal birth of the god Rama who was banished from his position as heir to the kingdom through a palace intrigue, he retreats to the forest with his wife and his favourite half brother, Lakshmana, to spend 14 years in exile. For his service to Rama, Hanuman is upheld as a model for all human devotion.

Hanuman is also a popular figure among Buddhists in Central, Southeast, and East Asia, and throughout those areas many temples have been erected for his worship and districts of towns bear his name. He has been identified as the inspiration for the monkey hero of the great Chinese poem Xiyouji (“Journey to the West”). Get to know the artist Panuwat Kamdee

‘Panuwat Kamdee’ or Pay received a Bachelor’s degree from Faculty of Arts and Architecture, majoring in Thai Arts, Rajamangala University of Technology Lanna.

“I was into art since a very young age and drawing cartoons was the gateway”, said the artist. “The more I kept on doing so, the more my creativity and my skills growing. Then it became natural and it’s the way I producing artwork nowadays. Yes, the playfulness, uniqueness, and easy accessibility character of my work are all reflect my childhood”, He added. Finding the style of art for expression

As new generation Lanna’s people who has appreciated his northern local culture, he has developed his art obsession and skills aiming to deliver to people. Not only the style but also the old traditional technique, he reinterprets the uniqueness and value of his home town’s culture to be more comprehensible.

“Local Thai-Lanna style is the one I chose to deliver my messages. Yet, in combination with the old technique like colored pigment on marl surface is not only serve as cultural preservation but also the perfection of expanding Thai contemporary art”, said the artist. “On the other hand, telling modern or coeval issues by using such traditional medium is what an act of resurrection Local Thai-Lanna style”, He added.

Technique that was carried from generation to generation

Colored pigment on marl surface is Thai know-how technique amongst Thai artisans that has been carried from generation to generation. Originally, this specific technique was used with stucco walls of masonry building for example Buddhist monastery or Vihara and The Ordination hall or Ubosot. The key processes that share in every region including cleaning wall’s surfaces, coating wall’s surfaces with the mixture of tamarind seed glue and marl in three layers, and tempering colored pigment for painting. From a professor’s suggestion, He at the first time encounter a proper exhibition. “The opportunity I got was the gateway of becoming an artist”, said Pay. He was fulfilled as well as his creativity. “Got to meet people specifically those who admired and appreciated my art work is such a wonderful experience. And exchanging ideas had opened up my perspective toward arts that it is an eternal”, he added. He continually improves his work til he got his recent proud of piece, “Suea Long”. “Suea Long, or in English translation is Lost Tiger, is my masterpiece as I had exhibited in The New Gen Connected Art Fest, Songkhla. Being known as an artist by both national and international  is nothing more but pride”, he concluded with heart warming smile.