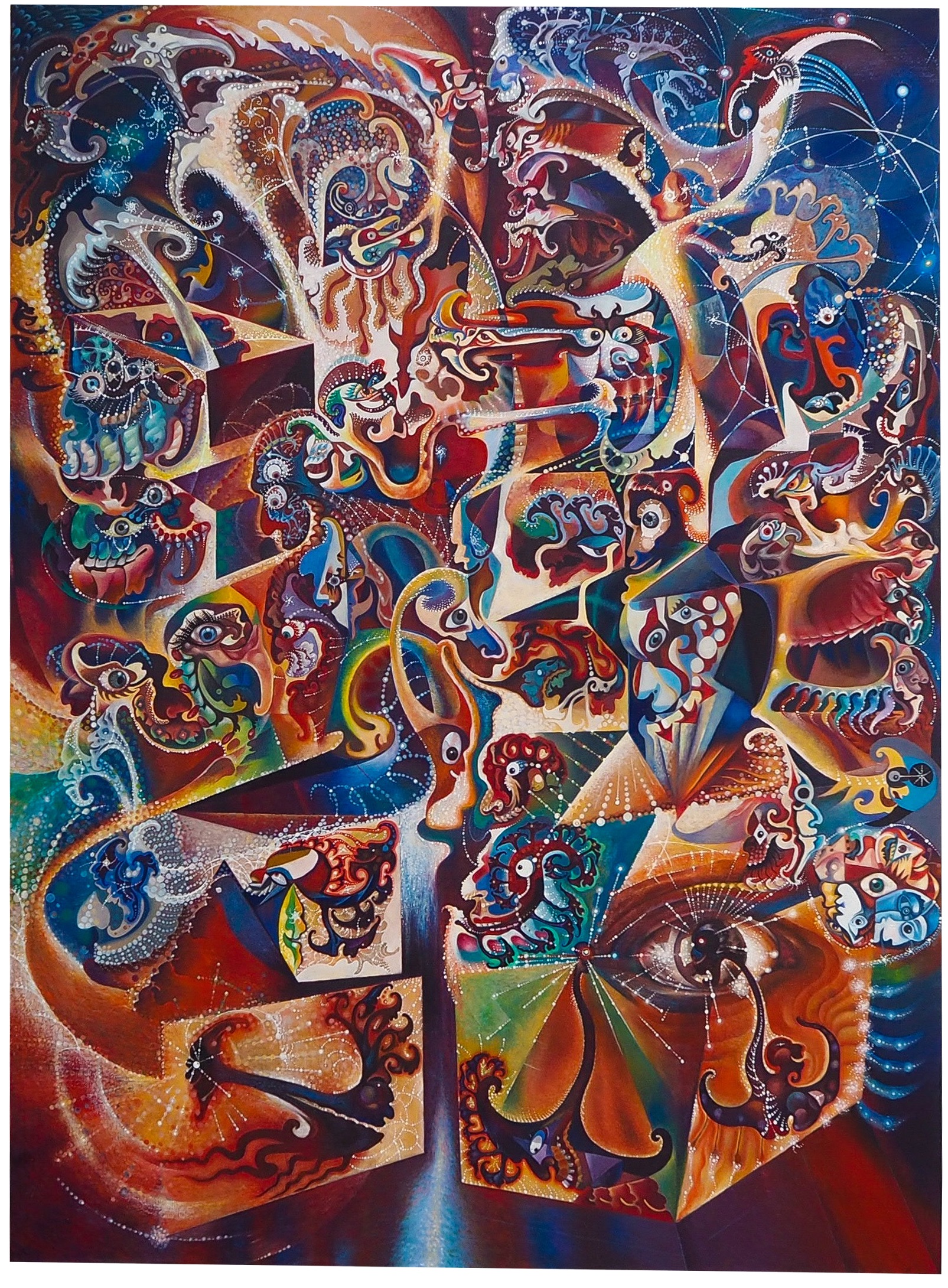 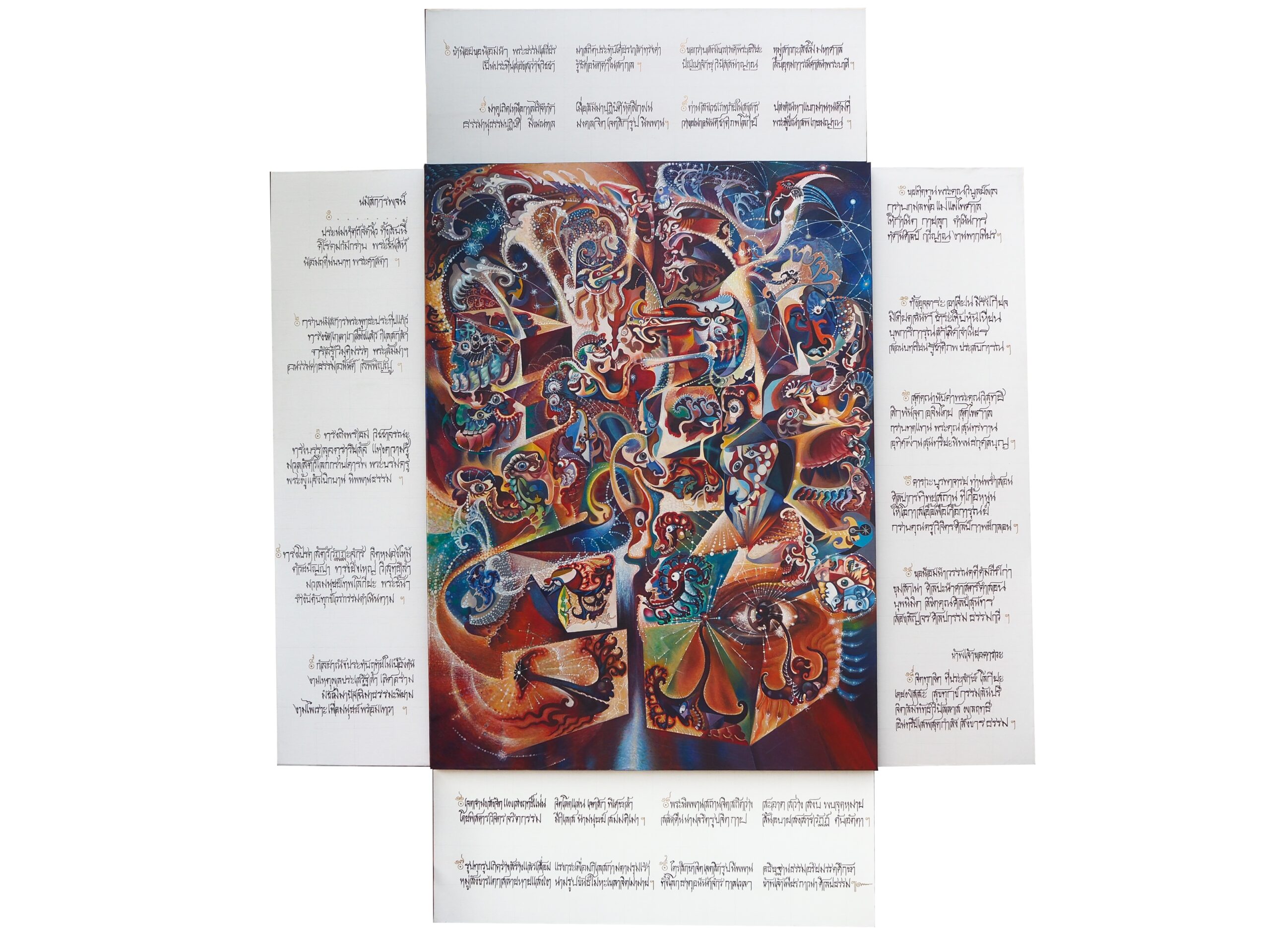 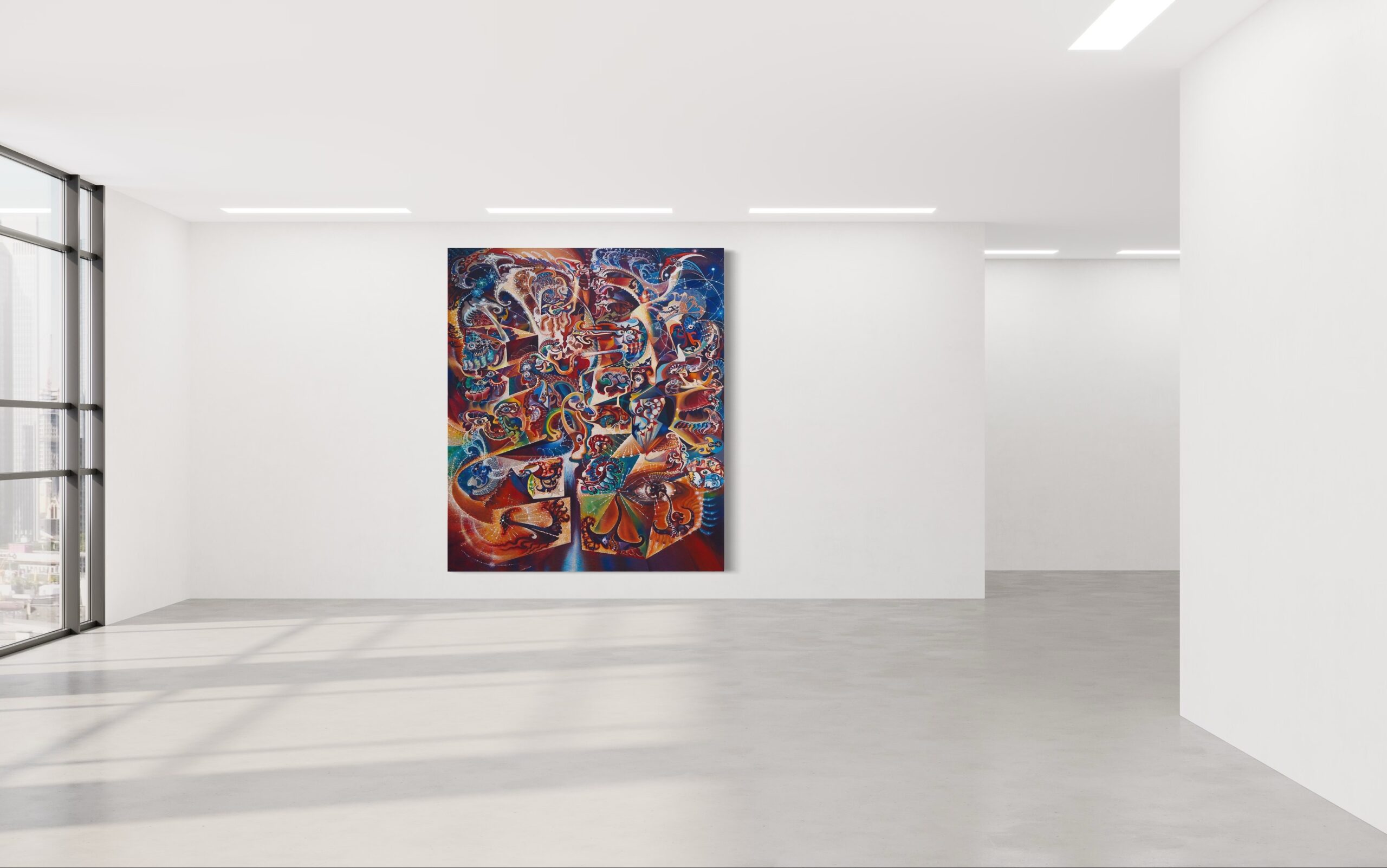 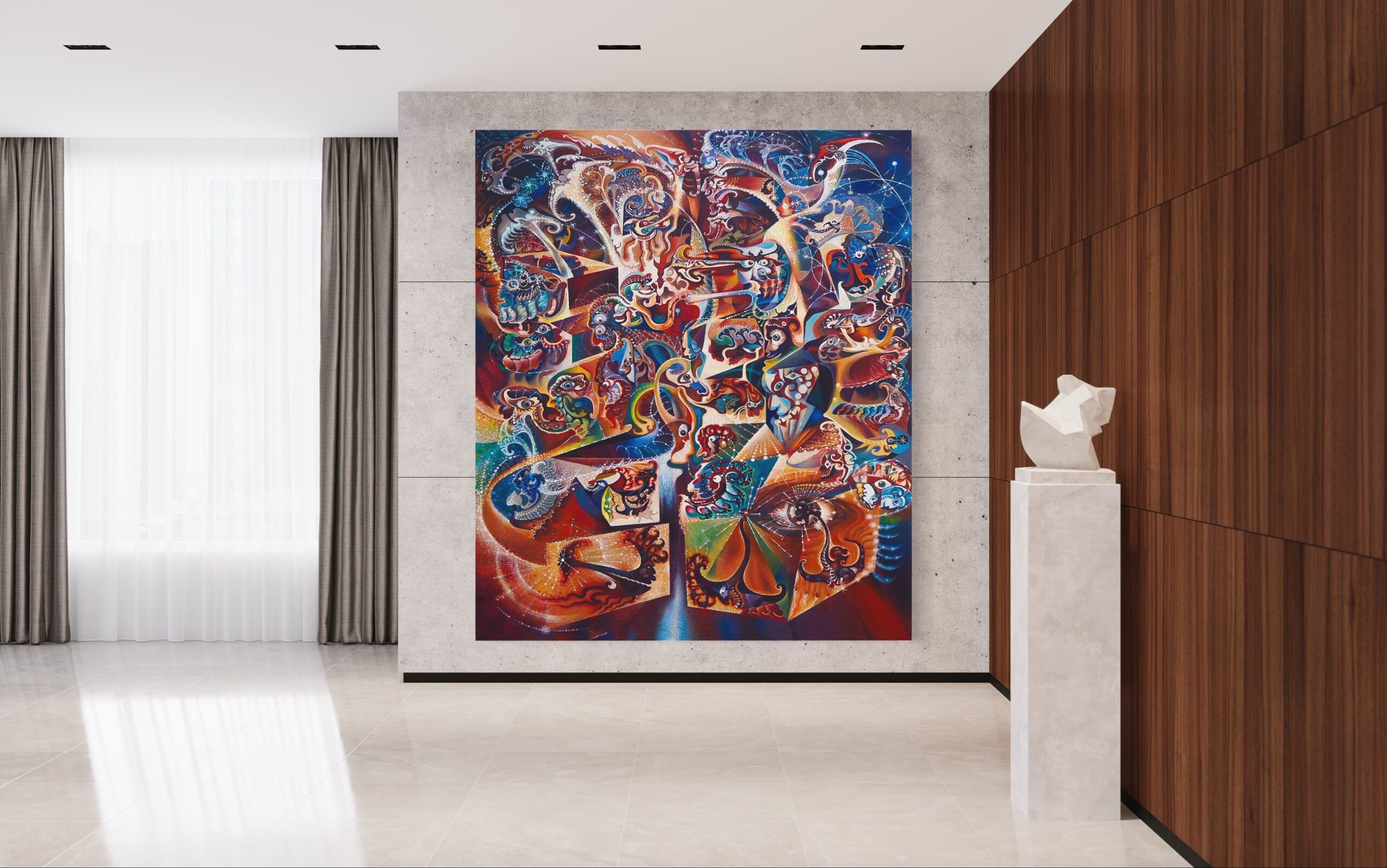 Artistic : Physics : Formulation of Human’s Form are key description belong to this painting, Fine Formation of individual Mind and Matter. This series of artwork (ทัศนศิลป์กวีทรรศน์) comprise of 4 pieces Including Fine Formation of individual Mind and Matter, Consciousness Fineness and Sankhara formation, Ignorance Sankhara formation Attachment and Sensuous plane, and Ignorance Sankhara formation Attachment Becoming and Birth. The technique used is a combine painting on linen. This Semi Abstract artwork aiming to deliver Dharma was done by creating shapes and forms using linear painting technique together with painterly painting technique. And variety of coloring type was the way to expressing emotional related.

The Art Professor from the long famous Art University, Silpakorn. He graduated both bachelor and master’s degree majoring painting from the Silpakorn University. Then, receiving an opportunity to teach there which he could do both teaching and creating artworks. “Teaching and creating artwork are somehow same to me as providing chance to always studying and keep improving while able to delivering to others”, said professor. Moreover, Professor Kesprasit has been drawn to literature. That’s why he usually compliments his painting with poetry. “Art and word are mediums that able to completely represent the truth, Dharma”, said him. Not considering himself as a professional artist even a long list artworks created, but as a person who consistently study by journaling life lesson and representing them all through art and literature.

Buddhism is not just one of the religion but the record of the truth within nature. “A science I say that was discovered and understood long time ago. Clarifying the secret behind nature and its truth. Making senses to all happening throughout space and time”, said Professor Kesprasit. He compare quantum physic to Buddhism as well as how quantum physic wiped out the older theory to how enlightenment shed away ignorance. “Quantum physic explain that inside each object, there are moving waves. Then going deeper, left only emptiness. Just like Buddhism that everything is nothing but intangible. Anything is always continually changeable, compounded, and no truthful”, added the artist. According to Dharma, each living creation could be divide into two parts comprising mind and body. The mind is in control over the body, a starting point that thinks, creates, and formulates the body itself. Moreover, the source of all outer behaviors. That how significant the mind is and always will be. Every mind belonging to every living being has its own will and ability to work for example; to love, to hate, to passionate. Which both itself and its will are abstract, but no longer until they formulating those outer behaviors. Behaviors are constructed from 5 natural elements that also serve as the awarer as well including eyes (to see), nose (to smells), mouth (to communicates and to tastes), ears (to hear), and skin (to feels). Thus acknowledging all actions, the mind then starting the reaction continually and endlessly. Dharma : The truth of Nature

While art is a form, the Buddhism is the core concept behind. Professor Kesprasit has been appreciated Dharma for a long time according to living closely to a religious oriented community. So he chose this topic to be the heart of creating artwork since his bachelor’s year. “Dharma is the truth of nature. It would never get old or being out, yet as simple as the sun and water.”, said Professor Kesprasit. Moreover he sees creating artwork as a way of spiritual practice saying that it’s like a meditation to him. “For me, art serve as both a medium and a process of studying Dharma, self examination, self improvement, and self enlightenment”, explained the artist.

The core inspiration on creating Artwork

Professor Kesprasit use Philosophy of Art, which comprise of Instrumentalism, Formalism, and Expressivism, as a core inspiration on creating Artwork. A combine painting on linen is an art medium that reach to what expected to be represented. This technique is a combination of different coloring type which each of them could provide certain mood and tone to the linen canvas. First is an oil color that acts as a metaphor of realistic as its characteristic give the shade and light to the painting. Moreover, carrying the mildness within. The artist use this coloring type to draw lines creating shapes and forms. Second, an acrylic color which was used as a background color. This one is as contrast as compliment with an oil color giving variety to the painting. And lastly, liquid paper was combined to highlight significant points. The artist said that it gives a movement finishing up the overall look. Growing up in local living province which either a field life or being government official were an only understandable choices, Surachart with the love of art since his youth had chosen other path for the becoming future. He preferred art related degrees both in vocational and high vocational degrees as those were the gateway to a deeper nurturing to art. “I broke the most common cycle of the era that every graduated one must pursuing teaching degree, the bottom of my heart has always knows its will, so I pursuing what would meant for me instead of what social would appreciate”, said Professor Kesprasit. “In those days, I have no idea about Silpakorn University but Poh-Chang Academy of Arts. So I started there and my skill had been sharpen for many years. Studying at Poh-Chang Academy of Arts had introduced me to the best stop for a further art career as well as a big melting pot that significantly creating Thai artists, Silpakorn University”, added the artist.

After received the high vocational degree, Professor Kesprasit had enrolled to Silpakorn University majoring in painting. Which firstly to a bachelor’s degree, then following by a master’s degree. And finally he had become an Art professor there who is not only creating artworks but also artists for decades until his retirement in 2022.

Moreover, Professor Kesprasit has been drawn to literature which novelette is first in his favor. “Writing is another pleasure of mine, as well as art that it’s natural to me”, explained him. Anyway in pairing words with his painting, he usually prefer poetry which is also another talented skill of him. His written topics usually come from circumstances around him, his relative, or social circle. Moreover, the main idea often reflects Dharma which is not just an aspect of life but the truth he has always been valued.

All of his life, he has painted and written but never once consider himself as a professional artist or writer. For him, he is a person who consistently study by journaling life lesson and representing them all through art and literature. Moreover, receiving a great opportunity to use those expression’s creations to teach as well as create further Thai artists as being a university professor. “My works comprise of painting part and poetry part which the main idea reflects one another, My work is my journal as they are the representation of life perspective and what I had learnt in each period. My works are simply a life recorder about Dharma, The truth”, concluded Professor Kesprasit.