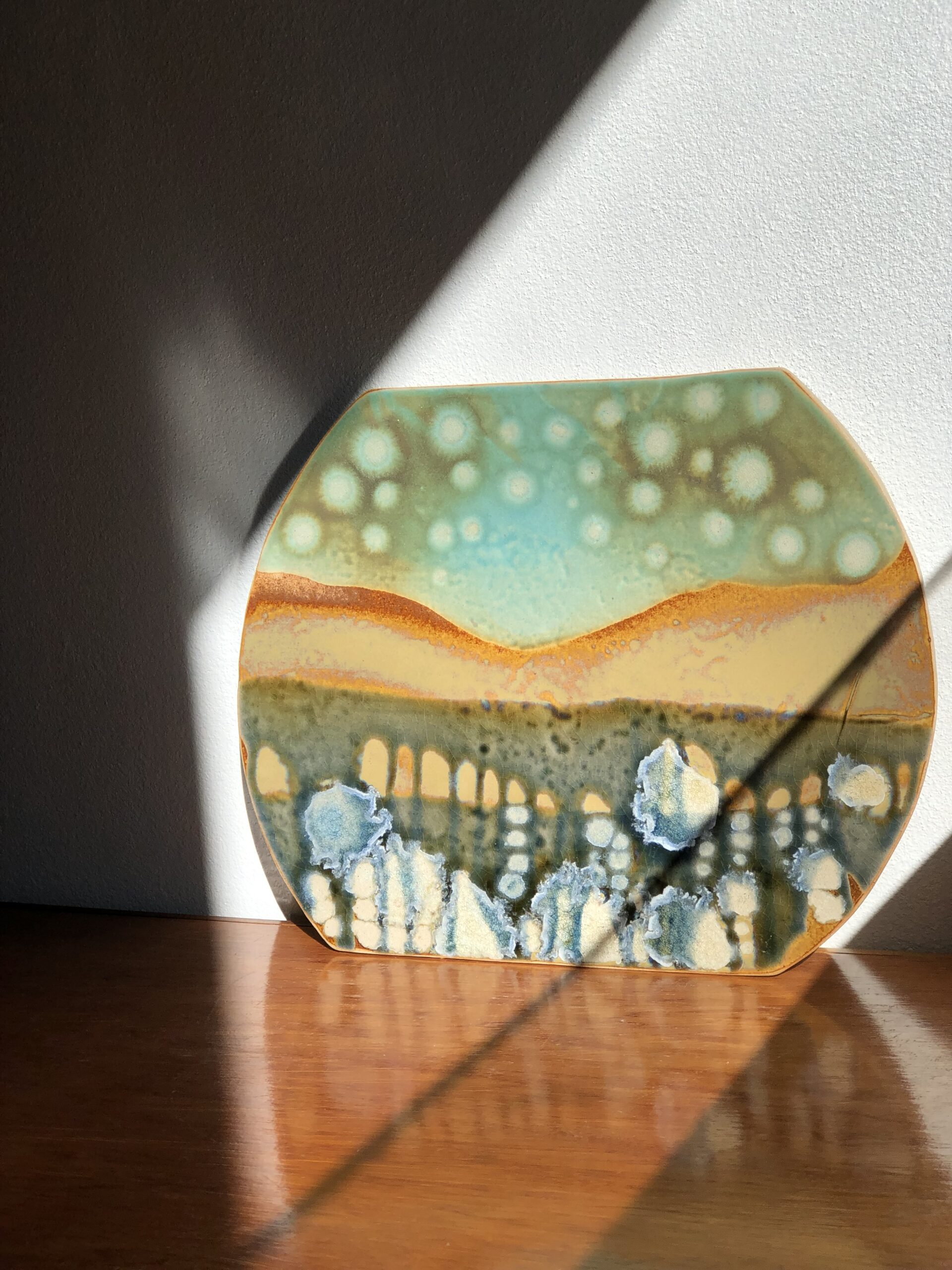 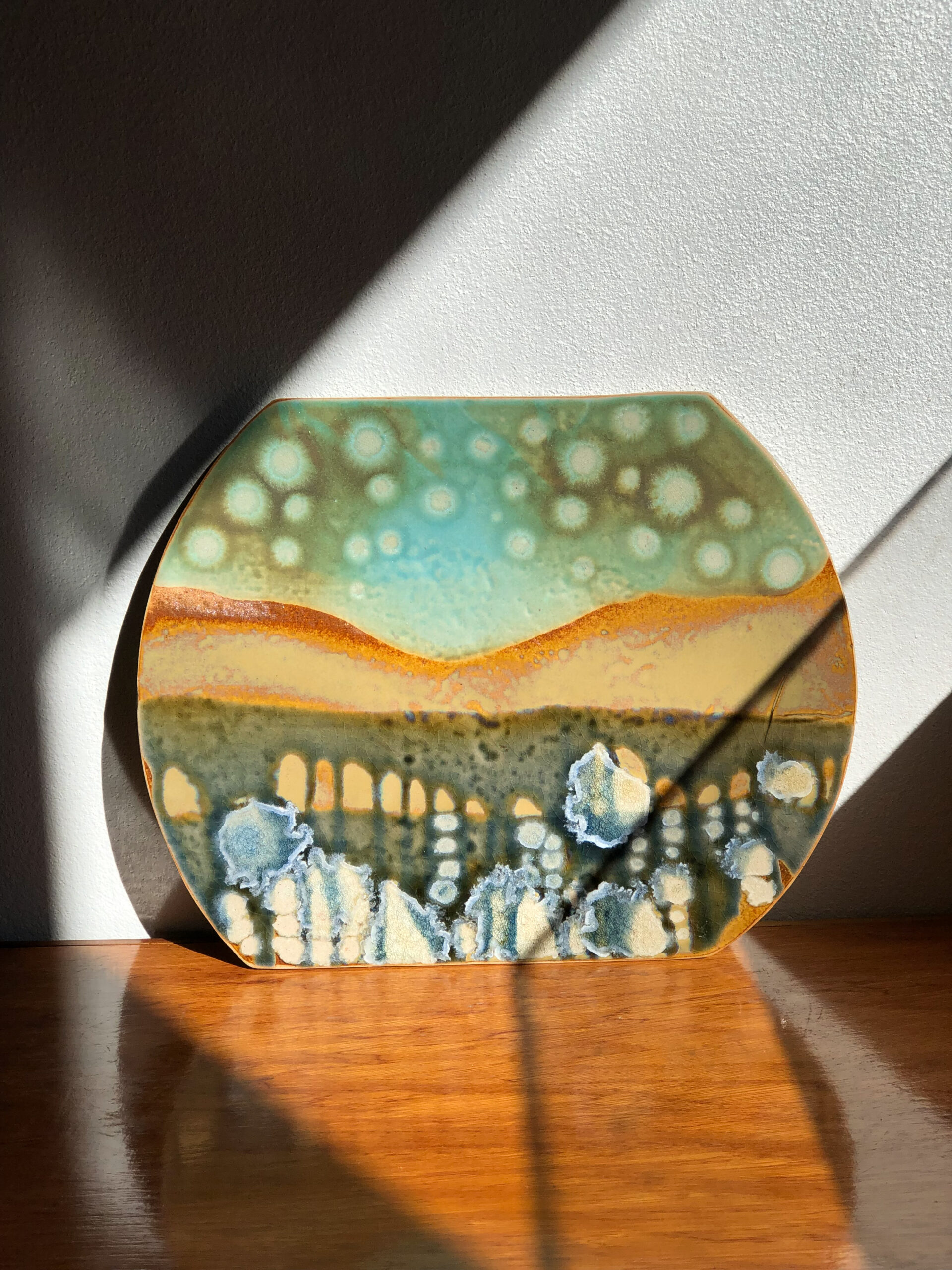 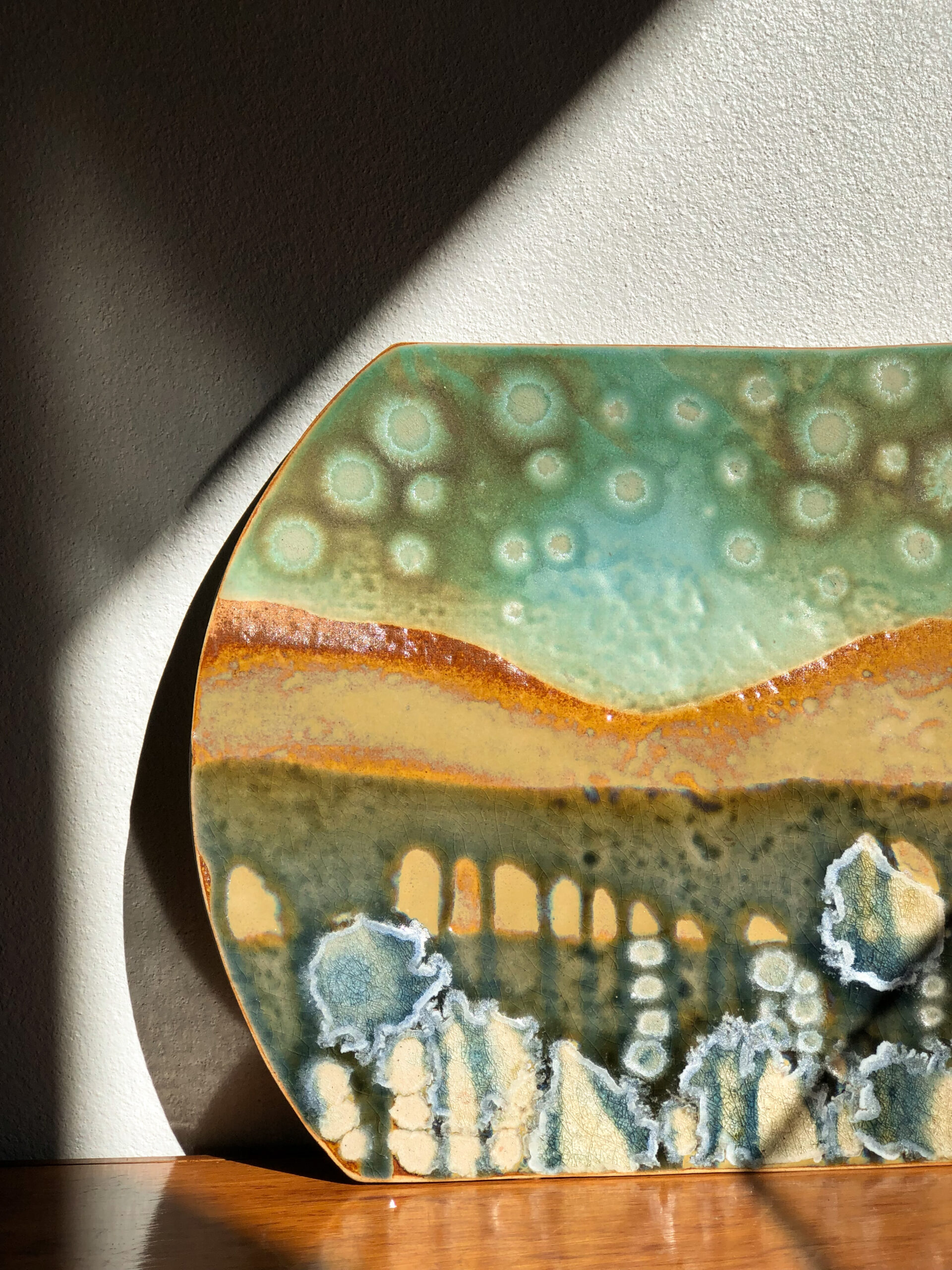 Made by Chaloemkiat, the father of the founder of MoThana Ceramic, this scenery-inspired wall decoration can be used as not only a decorative art piece but a practical dish. The piece is based on landscape art, which captures a beautiful natural occurrence that some may never get to see. With circumstances in nature, every moment is rare because of the uncertainty that the event will ever occur again. This may inspire viewers to go outside and capture one’s own unique moment. Looking at this art piece can shed sunlight on your rainy days.

Mothana Ceramic was established since 1999 in Sukhothai, where the history of the ceramic started in the era of 1238-1351, in which is called Sangkhalok. Their products are inspired from this period of time in Thai history but was modified to their own specific style with the techniques of glazing, firing and soil techniques. Using local soil as the main, it is considered common local stoneware. The glaze is the homemade oxide glaze used with high power has become Mothana Ceramic’s distinctive technique.

Their main goal is to keep the legacy of Sangkhalok and family tradition. Mothana works on ceramic production with his dad, Chaloemkiat Bunkhong. “My father’s knowledge of making ceramics is very valuable and should be kept preserved from the decay of time,” he shares proudly. To continue on their father’s legacy has become motivation to make sure his ceramic-making techniques are known to the world. The sources of material may be a quantified factor, but their imagination and creativity is limitless – knowing that their products can become staple decorations in many homes, the aesthetics is something they will always have in mind. The word Sangkhalok has different interpretations and assumptions. The first few pieces of evidence were Chinese ceramic ware from the Yuan dynasty, discovered in a sunken ship in the Gulf of Thailand. In the 19th Buddhist century, a comparative study of Sangkhalok and Ming Dynasty Chinese pottery was founded in the Philippines. It can be concluded that these ceramics were found scattered all over the world, thus making our knowledge about Sangkhalok quite blurred. One thing that can be confirmed with this information is the period it was being produced – Sangkhalok ware has been set to last from between the 18th to 19th Buddhist century mainly in Sukhothai. During the Ayutthaya period, however the product was promoted and marketed as an export product, which led to mass production and slowly established ceramic ware as part of Thai traditional culture. This form of craft has been known as local utensils and tableware ever since. In the present time, purchases and production has declined due to modern outlooks on lifestyle, but it still is considered a classic piece of the past.

Minimalism has become a popular home decoration style in today’s era because of the emphasis on simplicity, which is a favoured concept by many brands including this one. The style of the ceramics are meant for consumers who choose to decorate their rooms with furniture that isn’t too flashy or displays vivid colour. The products also focus mainly on the brightness from natural light, which accentuates the simplicity of the piece therefore having a minimalistic decoré may strengthen the mood and tone of these ceramic wares. They are also easy to clean and maintain, adding brightness and freshness to any room it is placed in. Browse these products to see how they shine.