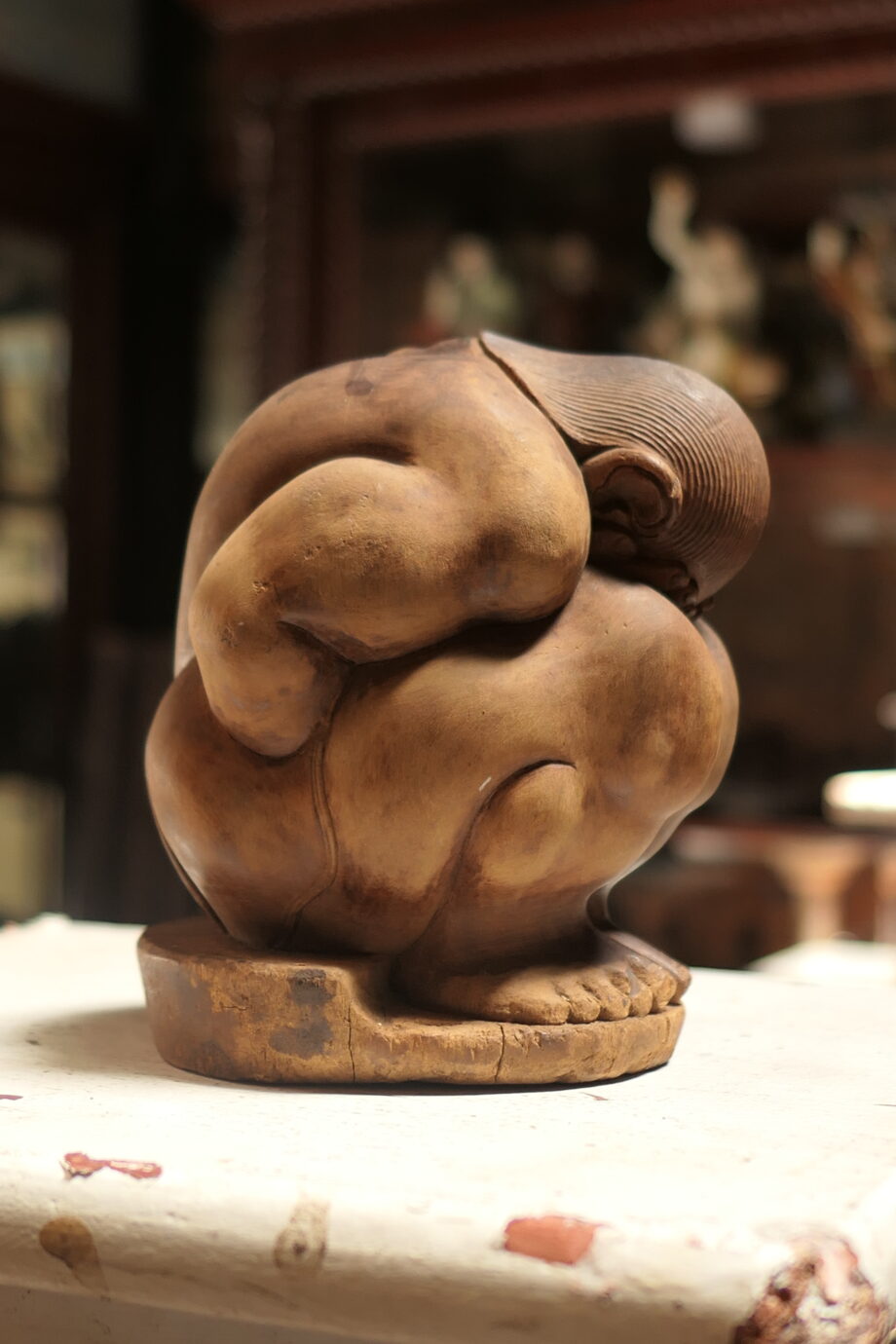 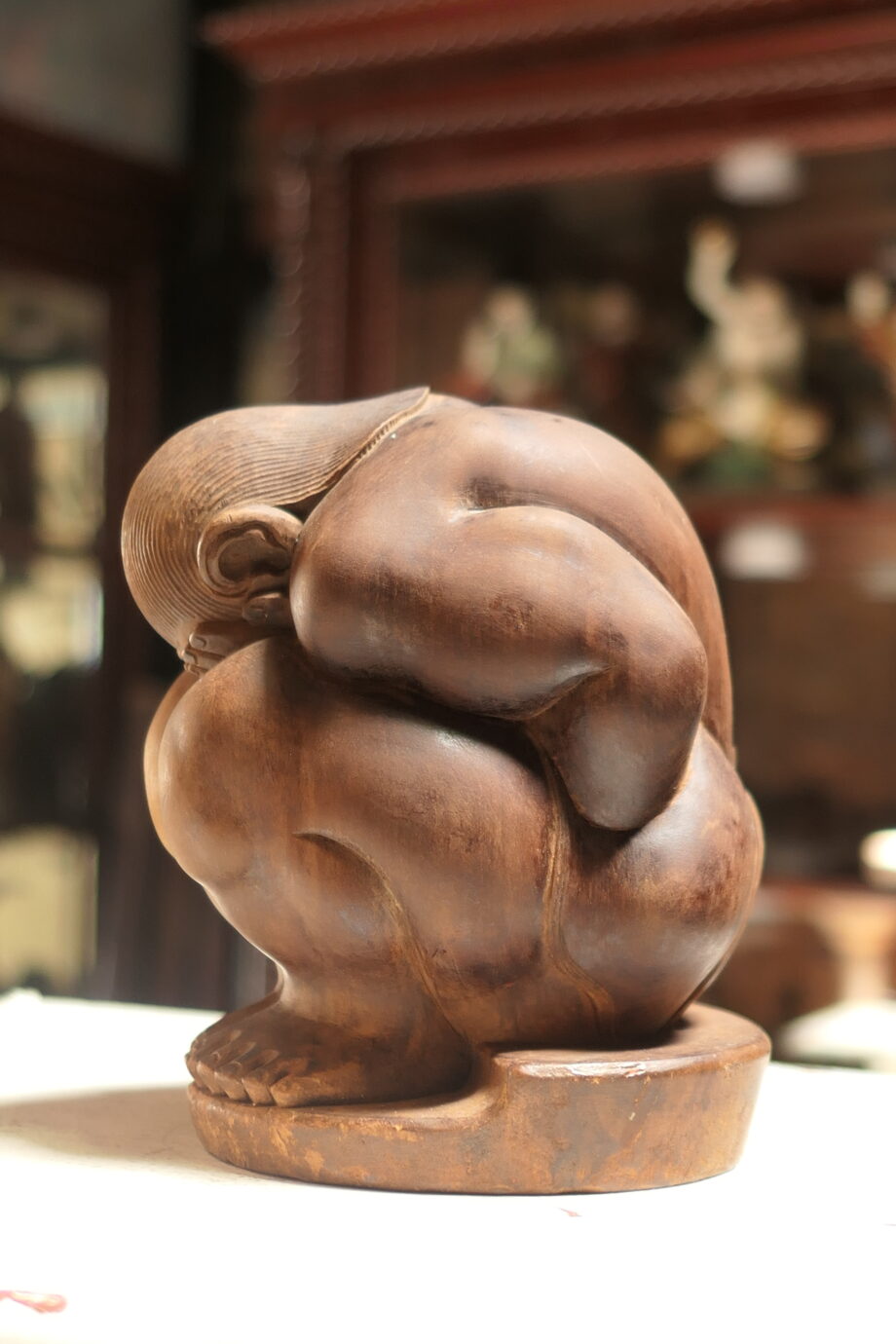 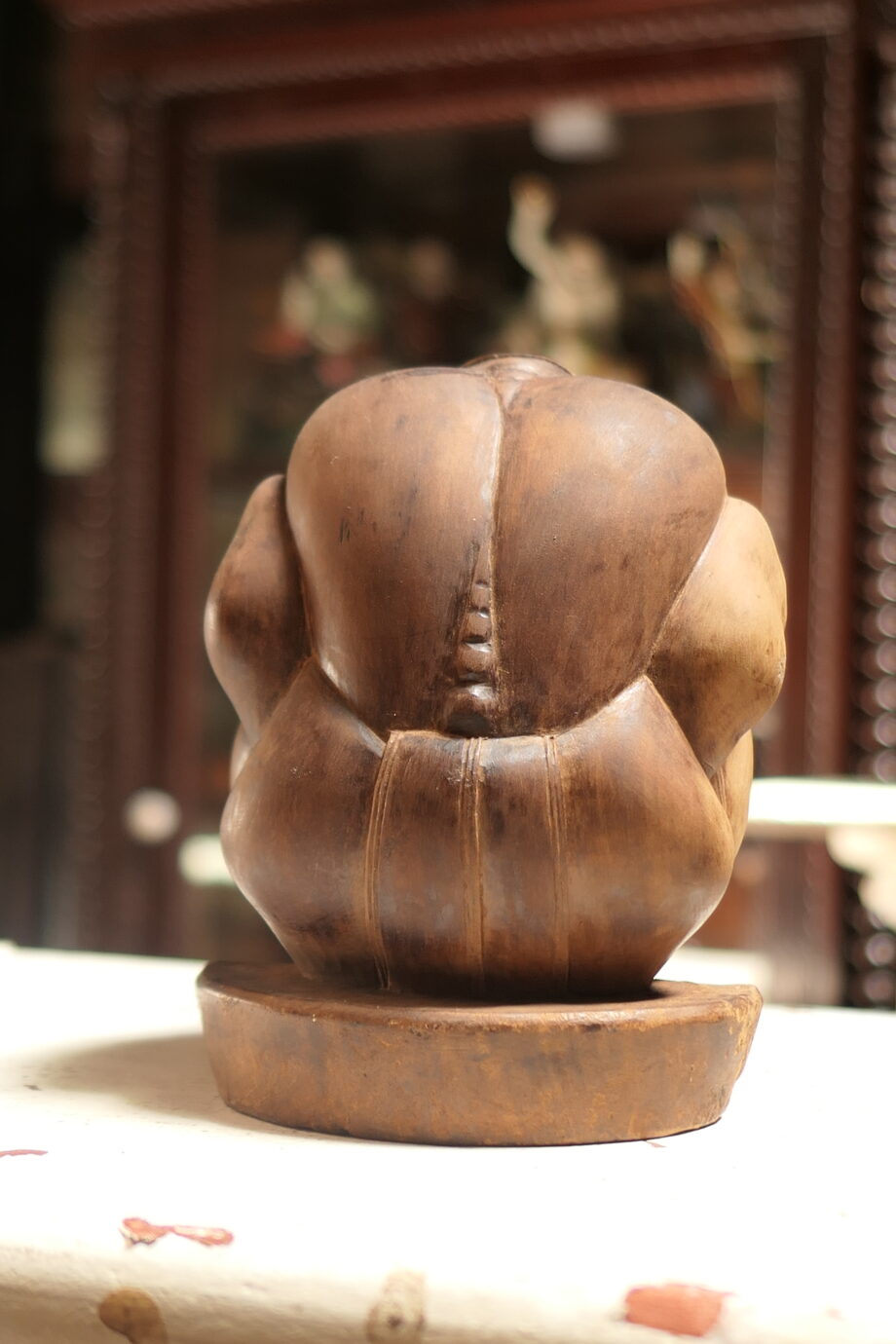 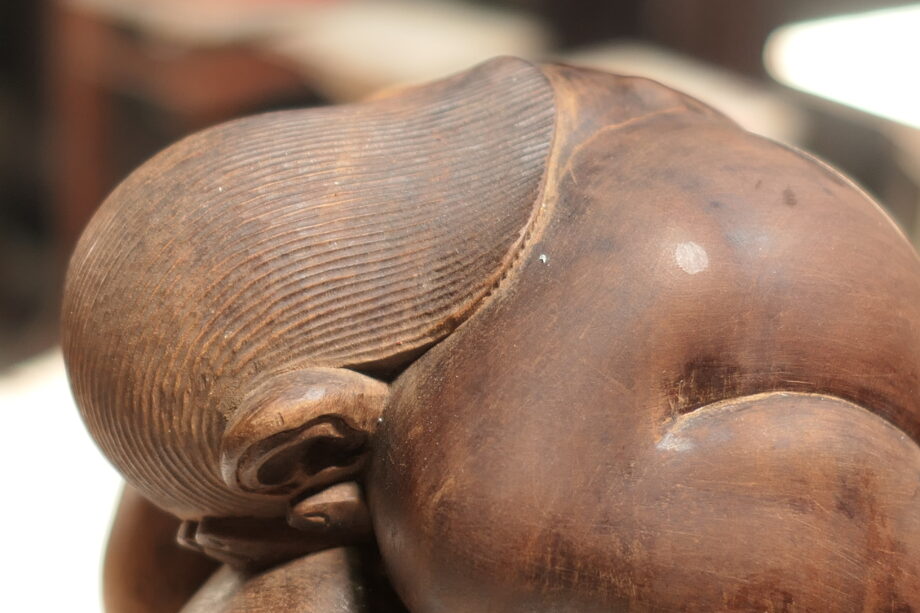 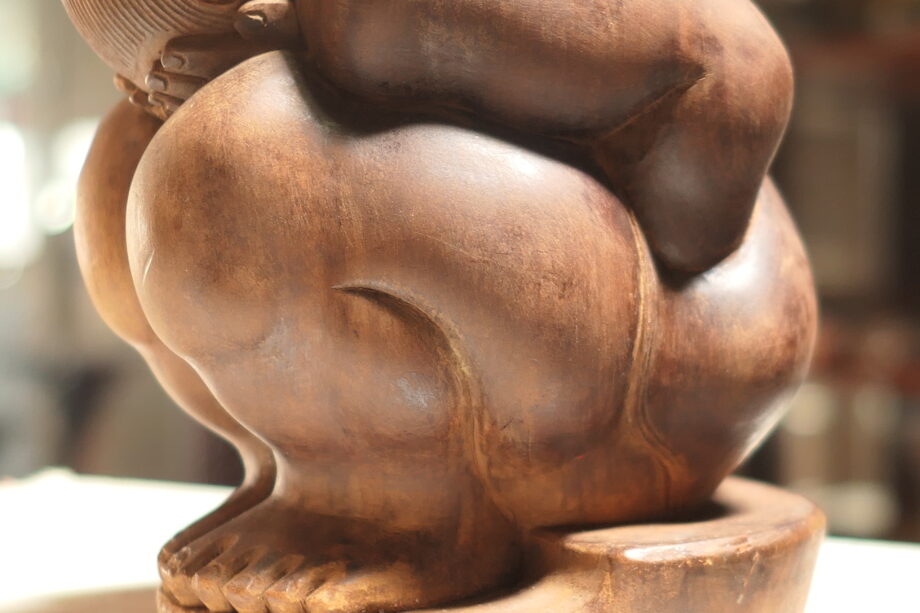 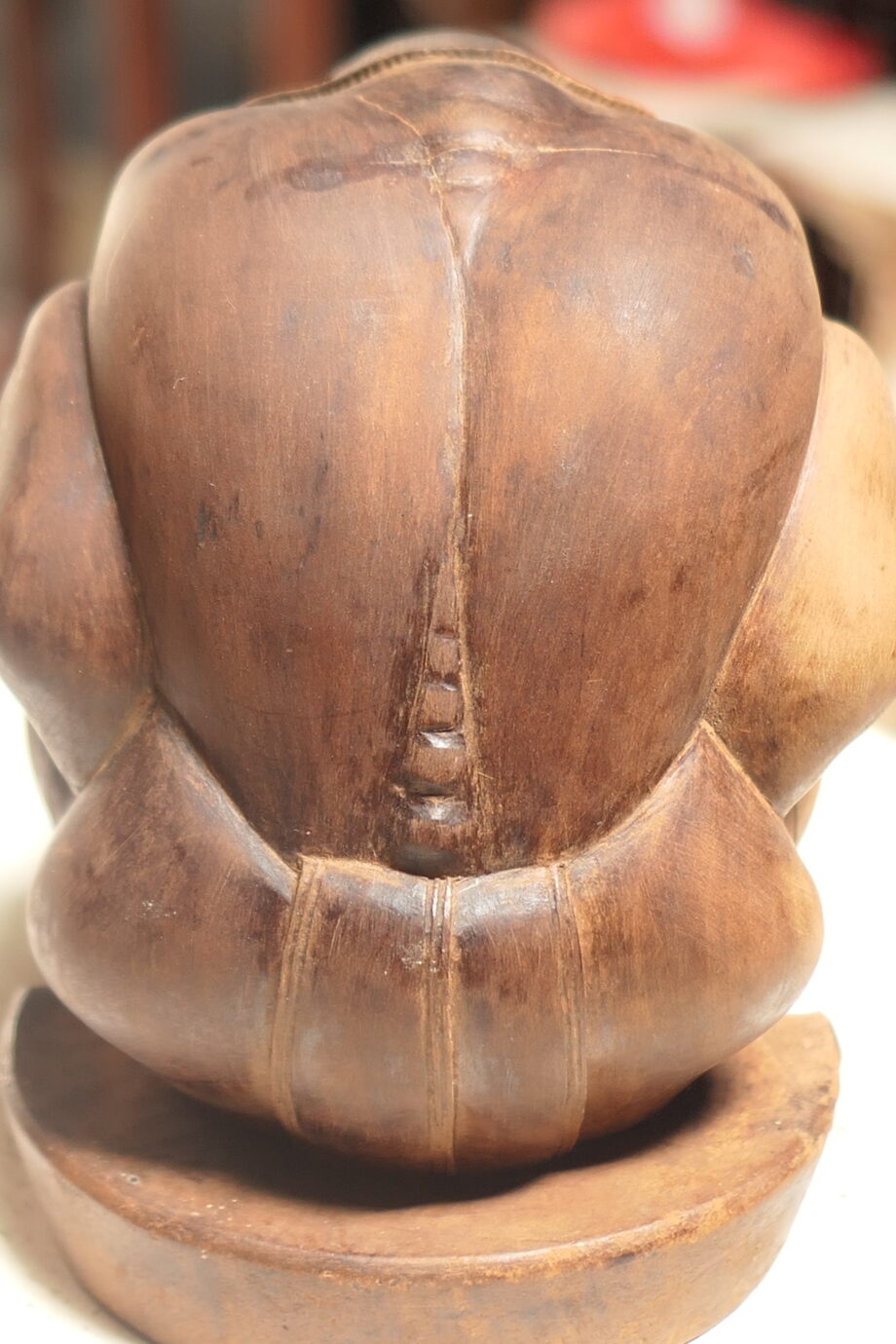 This beautiful woodcraft shy woman statue was inspired by the Bali story of Shy Yogi or Weeping Buddha also called the “Shy Man”.This symbolizes the necessity for reflection of one’s own thoughts, rather than the actual environment around us.

Wood Carving with great Artistic Sculpture. Nice wood grain and generally good condition!This traditional-looking artwork will surely provide peace to your house, workplace, or living area. It is certain to enchant your house with its endlessly ageless classic style!

Size : 9 x 9 x 11 cm
Weight : approx 2 kg
Material : Carved Wood
Condition : This vintage item has no defects, but it may show the imperfections that correlate with age and use.

Inspiration by the legend of the shy man Buddha

There are numerous interpretations of the sculpture’s significance or narrative. One version is that this sculpture represents the need for introspection of one’s self, one’s own mind, and not the physical world around us. Another says the Weeping Buddha is crying for all the pain and suffering in the world. One says the Shy Yogi assumes the fetal position and presses his forehead to his hands in a pose said to awaken the mystical third eye. Yet another says the Weeping Yogi is in eternal mourning and sadness after learning of the death of his own son who he unknowingly killed in battle.

The story of Bali Weeping Buddha

We all know the story of Siddharta Gautama. He was a prince who saw the troubles of the world, and instead of sheltering himself behind the walls of his kingdom, left behind all that he knew to seek the truth of the universe. But did you know that there are hundreds of tales about the Buddha before and after this. The tales range from his past lives to his road of trials. The story of the weeping Buddha takes place in a past life.

The tale of the weeping Buddha has been around for centuries. It goes like this. The Warrior Buddha, with campaigns left to wage, left his home for many years. He left his son with it. When he came back, years later, another battle was waged against an adversary at home. Buddha Buddha wore a mask and the other warrior wore a mask. Neither warrior ever got the best of the other. After facing each other on numerous occasions, the Buddha finally killed the other in battle. After the victorious warrior removed the mask of his now deceased opponent, he realized he had just killed his long lost son. It was then that the warrior Buddha became the weeping Buddha and renounced violence. He proclaimed the virtues of helping the young, sick, and old; that compassion is the highest of all virtues.