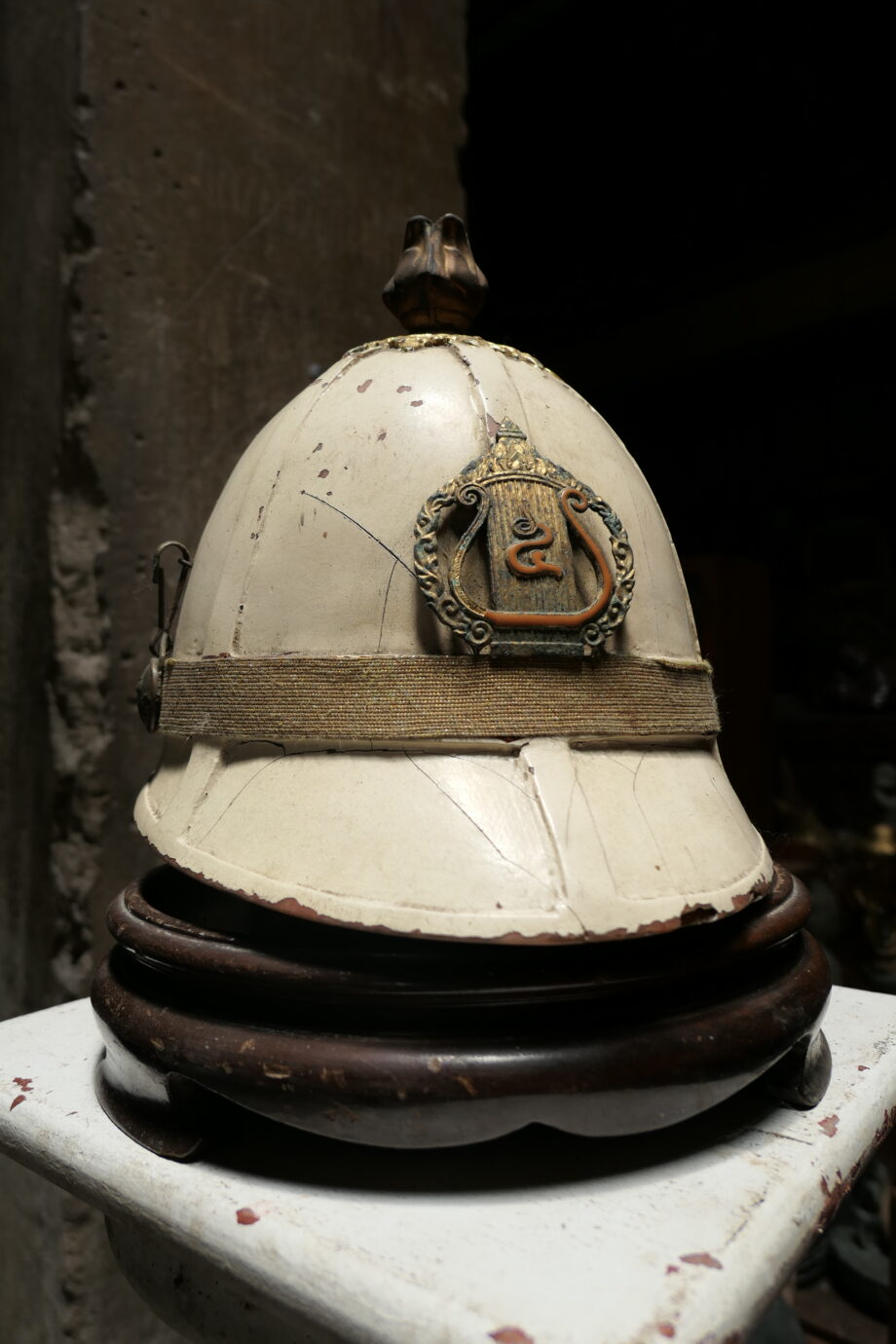 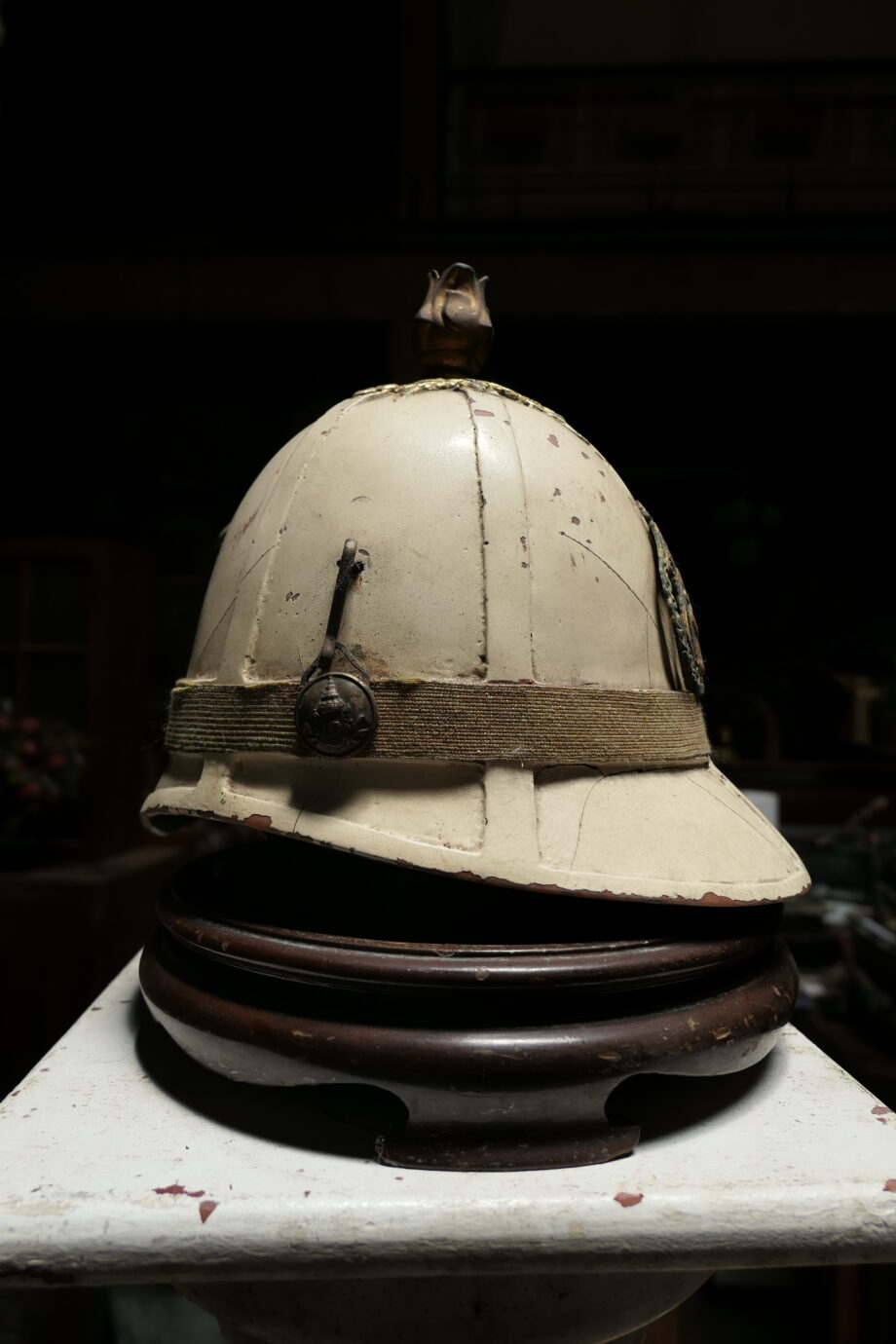 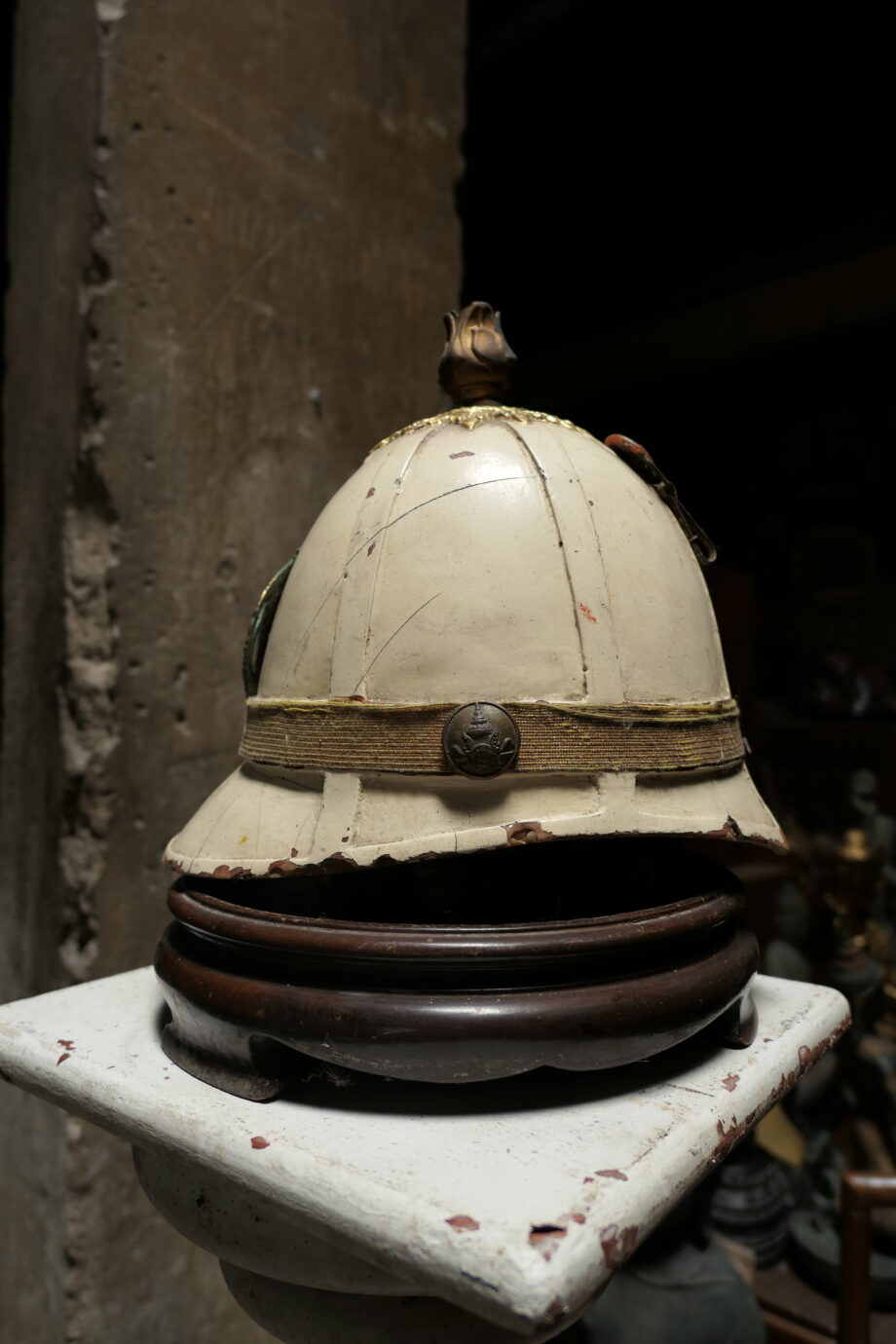 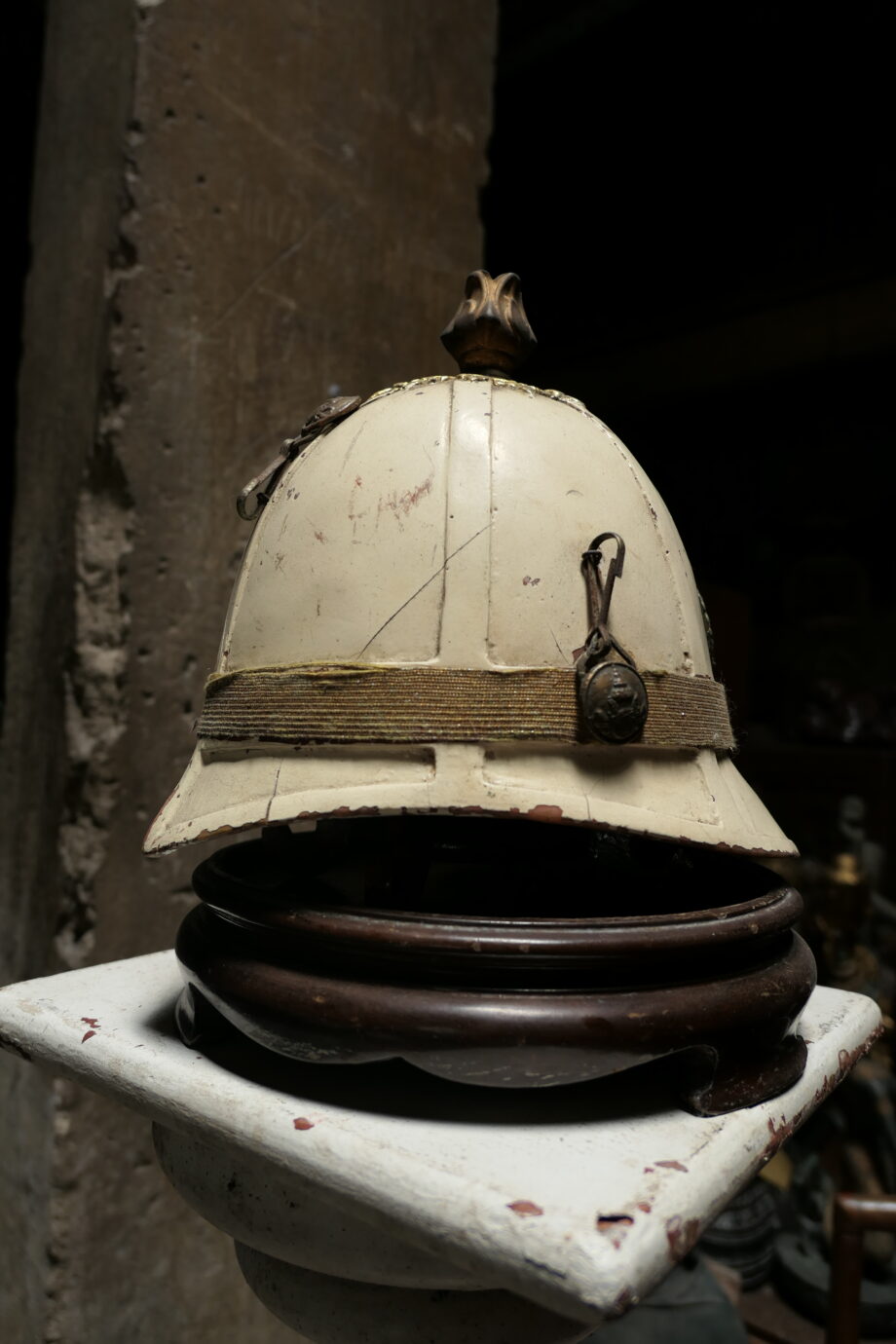 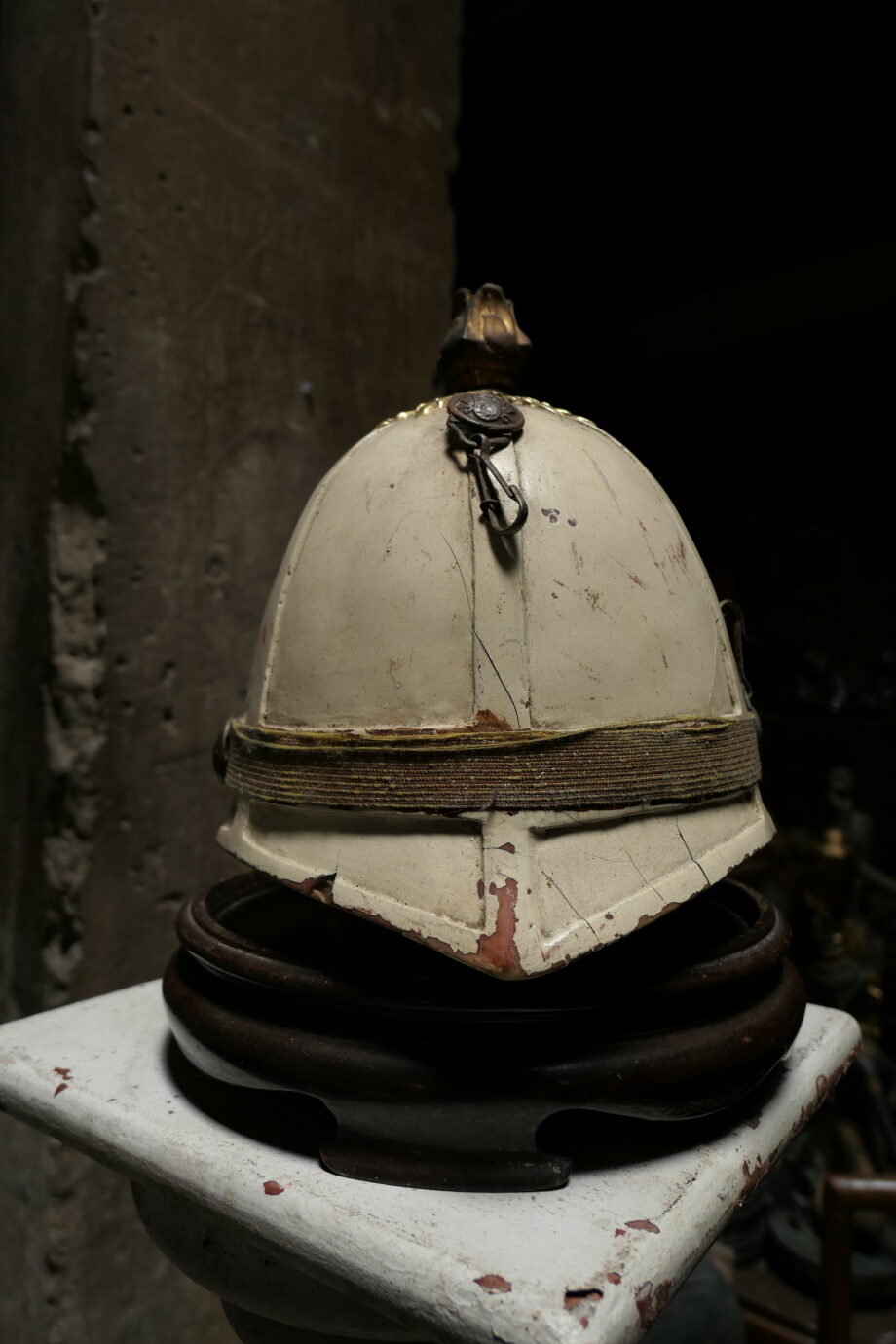 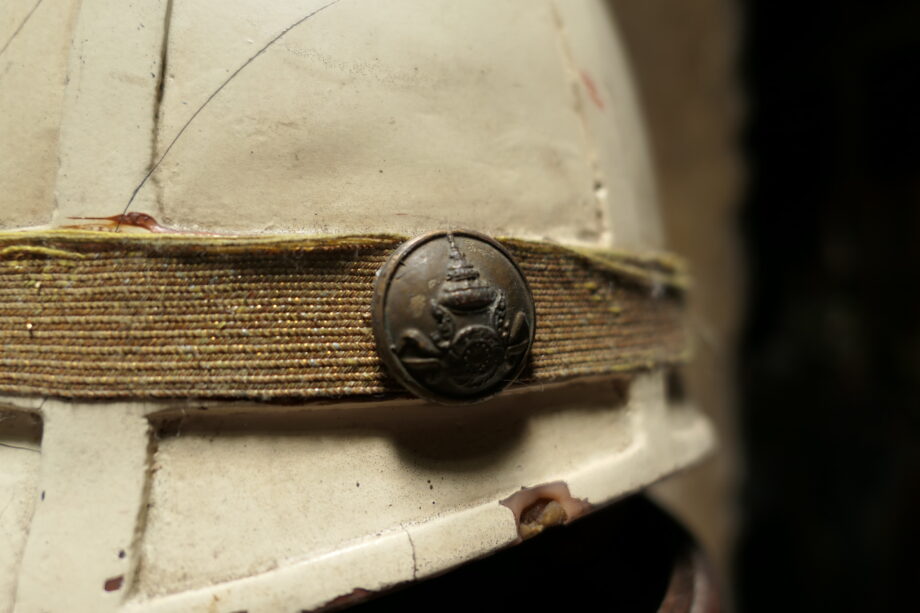 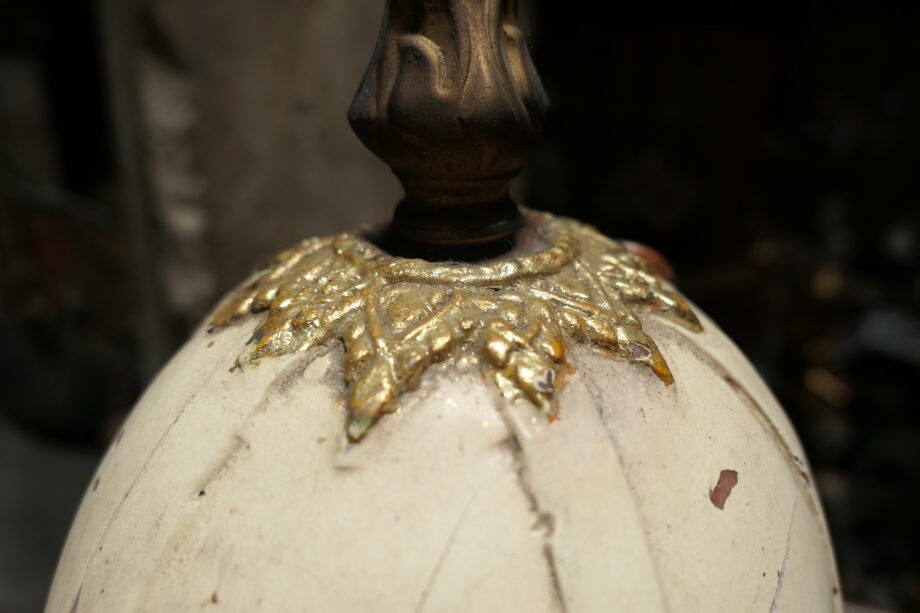 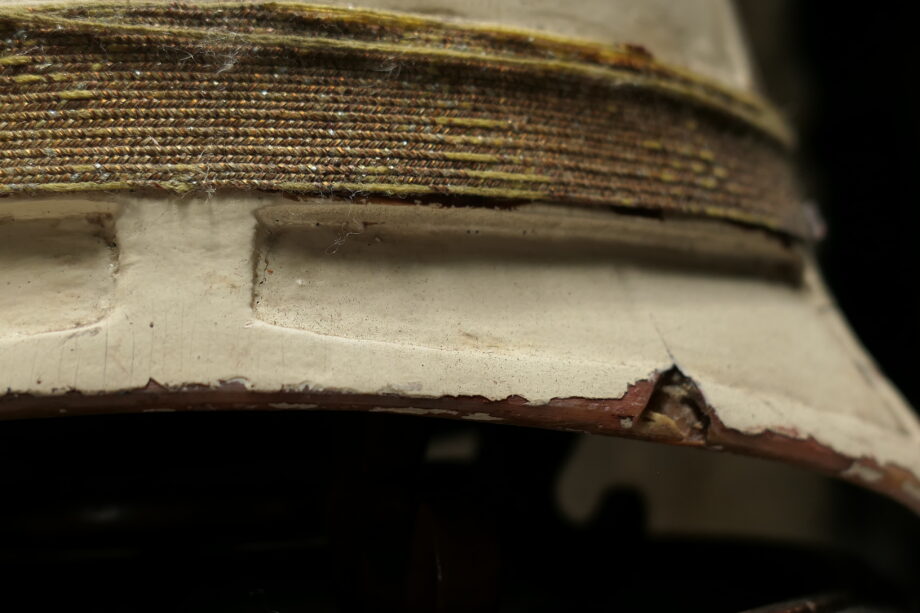 This antique Sun Helmet was approximately 112 years old. In the front head, it is inlaid with the number 5 (๕) in Thai number. This type of helmets was very popular in the colonial period which corresponds to the execution of King Rama V or Chulalongkorn King.

Size : 18 x 28 cm
Weight : approx 1.5 kg
Condition : This antique item has no defects, but it may show the imperfections that correlate with age and use.

This antique Sun Helmet was approximately 112 years old. In the front head, it is inlaid with the number 5 (๕) in Thai number. This type of helmets was very popular in the colonial period which corresponds to the execution of King Rama V or Chulalongkorn King.

Get to know ‘Sun Helmet’

Sun helmets were used by nearly all the colonial powers in East Asia an, but three local nations also utilized a wide range of sun/pith helmets. These include of course Japan, which during the Second War World used a variety of patterns of helmets; and Vietnam, which adopted a variation of French Model 1931 that was produced locally and made this pattern its own.

The other power that wore sun helmets is actually the nation that used sun helmets the longest in the region, and which ironically is overlooked when considered in the grand history of this form of headdress. This of course is Thailand, formerly known as Siam.

The history of the use of sun helmets in Thailand goes back to the second half of the 19th century during the reign of King Chulalongkorn (1868-1910), who was also known as Rama V. As a reformer he helped modernize the nation, and managed to fend off colonial rule. However, during his reign the nation lost its claims to land that today makes up modern Cambodia, Laos and parts of Burma. As both King Chulalongkorn and his father King Mongkut – both of whose lives were chronicled in the fictionalized story Anna and the King of Siam, which was later turned into the musical The King and I – had looked to the west to modernize the Siamese Army, this included adopting the sun helmet The earliest helmets, of which only a few remain in private collections and in museums, appear to be British made helmets – likely from India. These were used until the 1920s when the Thailand began to purchase military arms and equipment from Europe. This included French and Belgian made steel helmets.

When World War II broke out in Europe, Thailand looked to use the war as an opportunity to regain territories ceded to the French in 1893 and 1904. The result was a small-scale war with Vichy France. Following this the Thai Government under Luang Pibulsonggram, the military dictator known as Phibun, allowed the Japanese passage through the nation when Japan declared war on the United Kingdom. The result was that Thailand became a de facto Axis power.

During the war the Thais used various Japanese supplied equipment and large supplies of captured French and British arms and equipment as well. Following the war Thailand received little punishment for its wartime role under Phibun, who was removed from power in 1944 but returned following a second coup in the 1950s.

The Thai Army used large quantities of Japanese arms and equipment in the 1950s and 1960s, and this included Japanese helmets – both steel and sun helmets – with Thai badges added. The Thai military continued to use sun helmets, which is to be expected given the hot and humid climate.

Get to know King Rama V or King Chulalongkorn the Great!

Who exactly was King Chulalongkorn? King Chulalongkorn is the fifth monarch of Siam under the House of Chakri. He is the son of King Mongkut and the grandfather of the current King of Thailand, His Majesty the King Bhumibol Adulyadej.

King Chulalongkorn the Great was the son of King Rama IV or King Chomklao and Queen Thepsirinthara. He was born on September 20 1953 named as Prince Chulalongkorn. At the age 9, he was appointed by the father as Krommuan Pighaneshavarasurasangkash and then Kromkhun Pinit Prachanath at the age 13. The first coronation was done on November 11 1868 under the title “Phrabatsomdet Phraparamindra Mahachulalongkorn Phra Chulachomklao Chaoyuhua“. During the time of execution, King Chulalongkorn had studied various branches of arts and sciences such as Royal Tradition, Public Administration, Archaeology, Pali, English, Military Science Wrestling, Weapon Using, and Engineering. Moreover, he paid state visits to Singapore and Java twice and India once. It was not the pleasant tour but an observation-tour to observe the political systems and administration of the European Imperialists who came to govern the colonies in South Asia and South-east. Asia by this way he brought back new knowledge and technology to apply in Thai government. Royal tradition such as uniform, haircut and audience the king were changed to the western style.