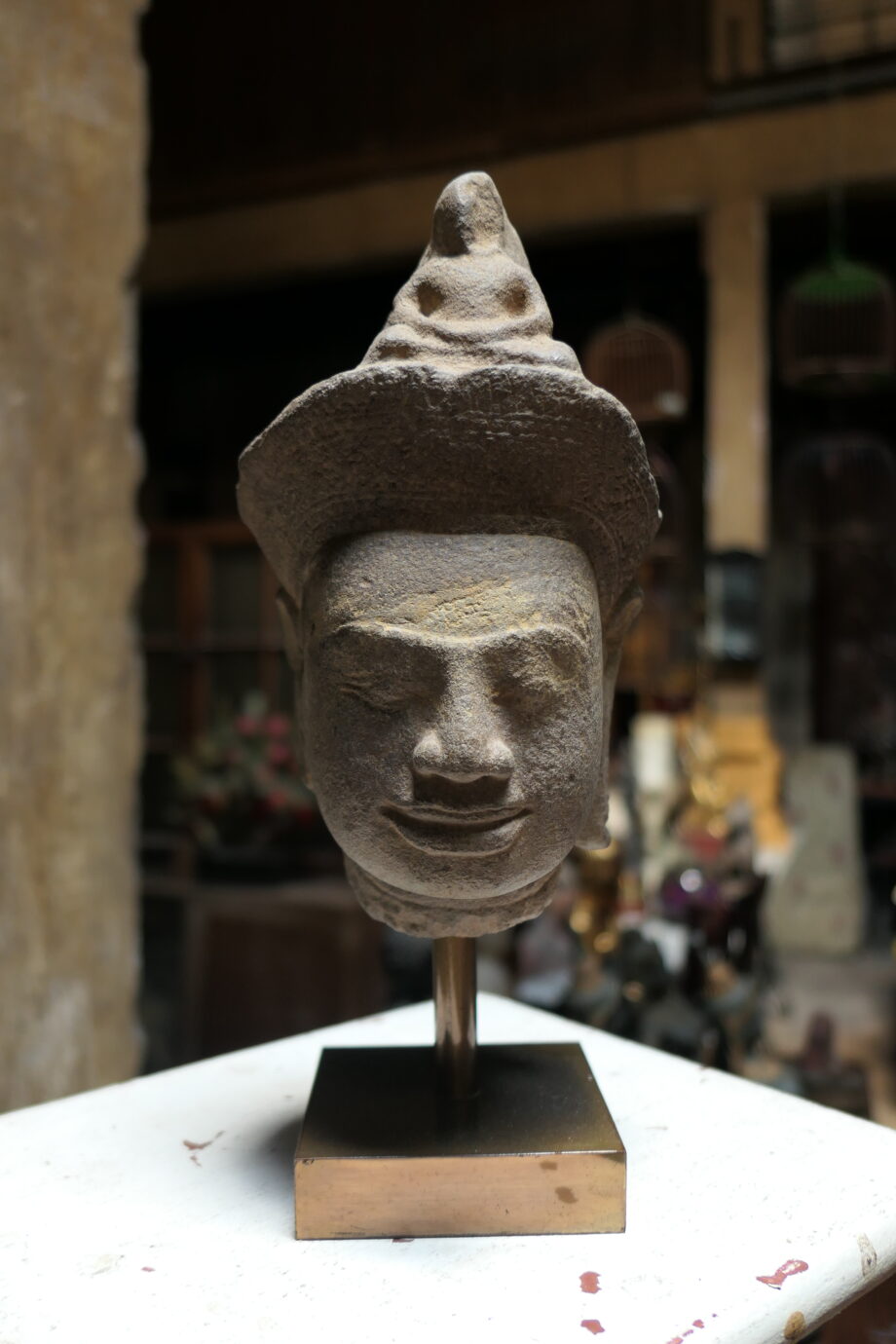 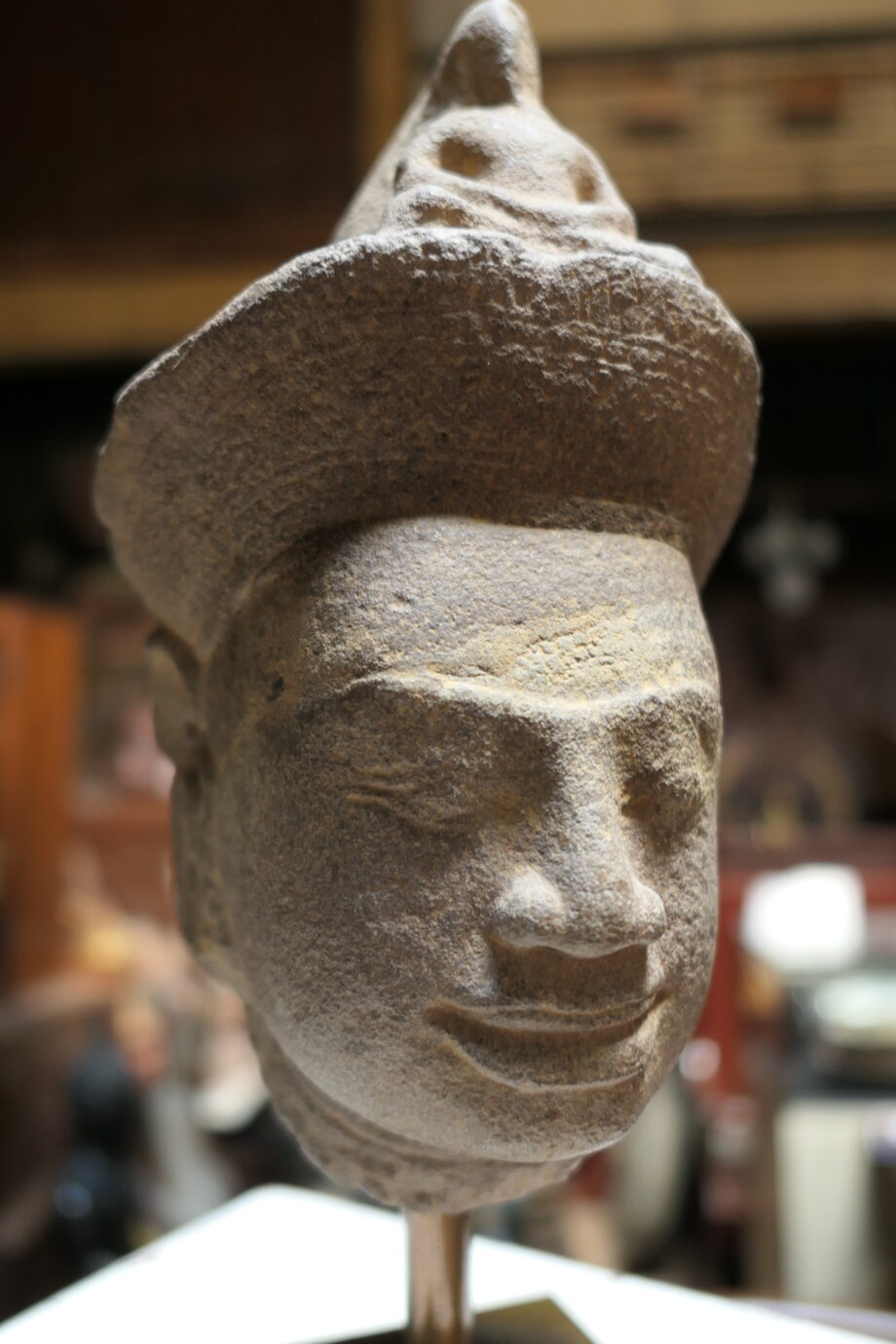 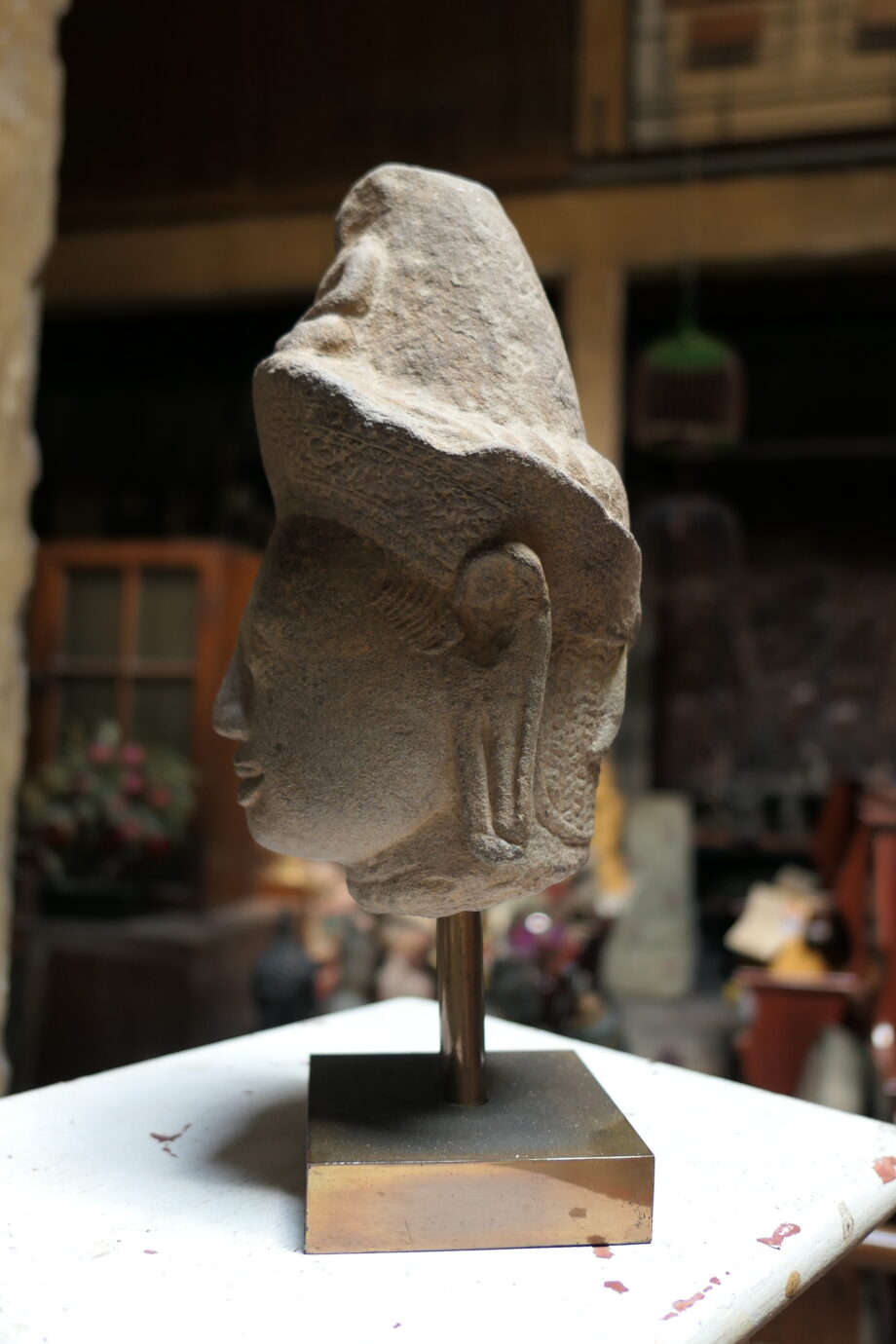 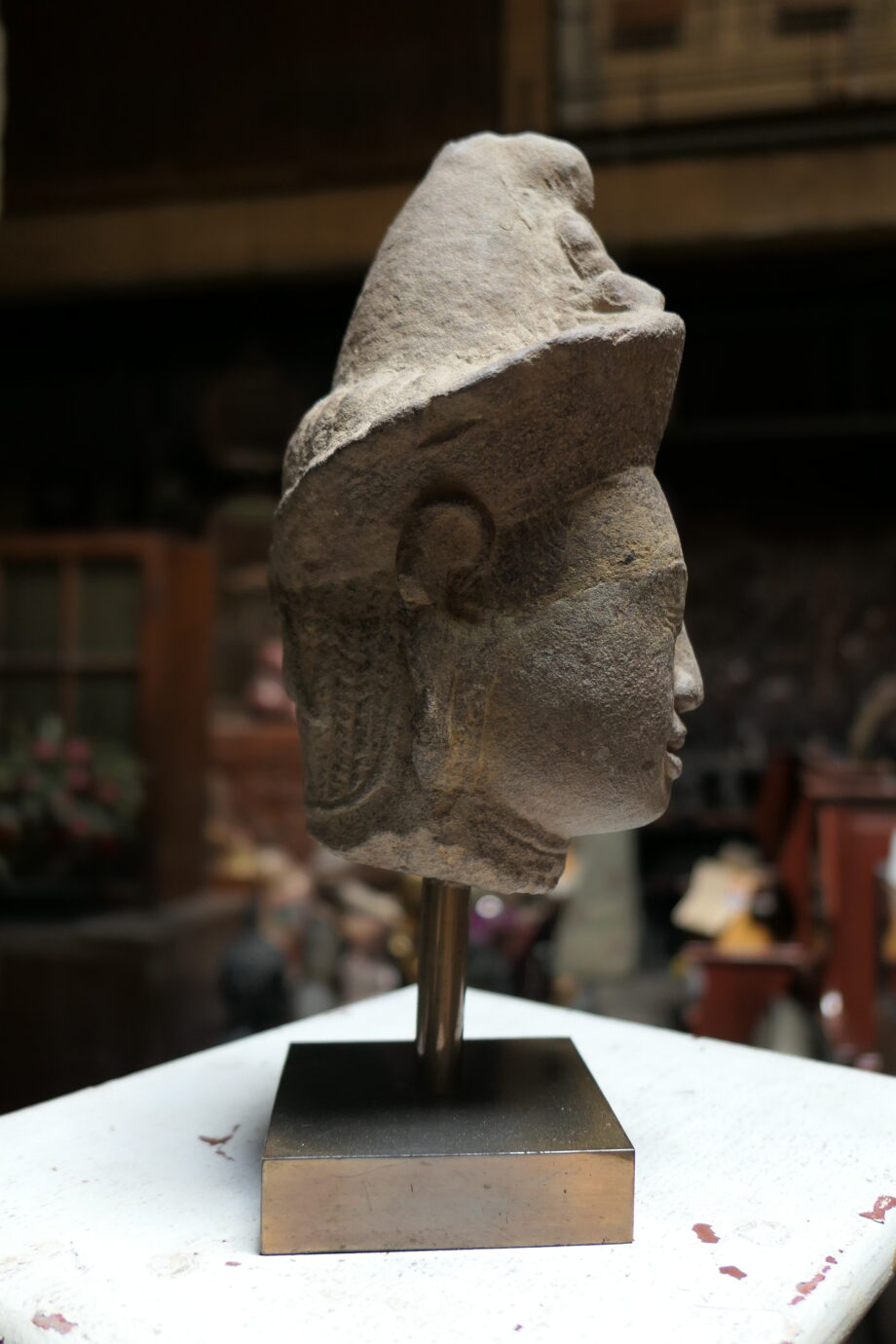 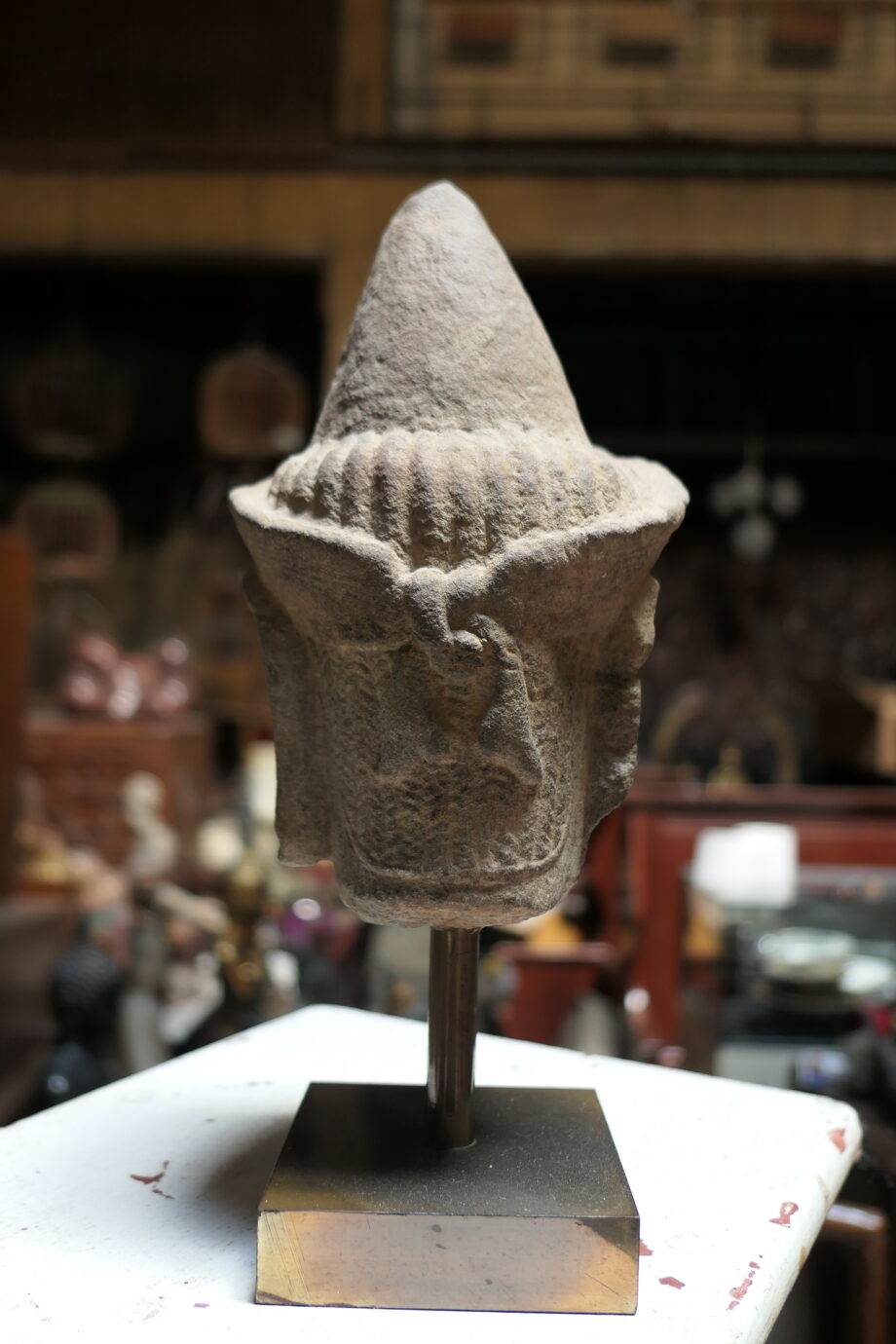 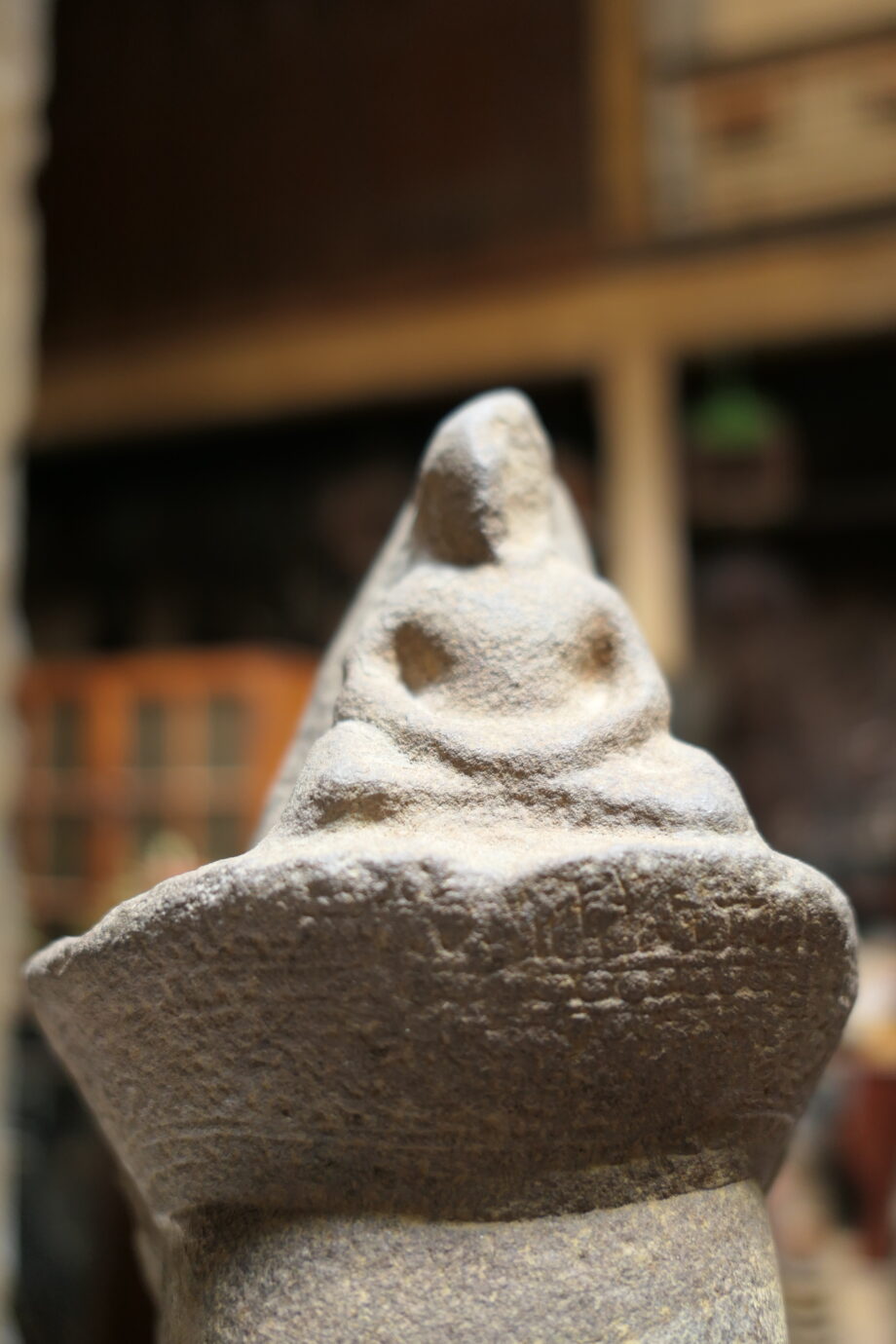 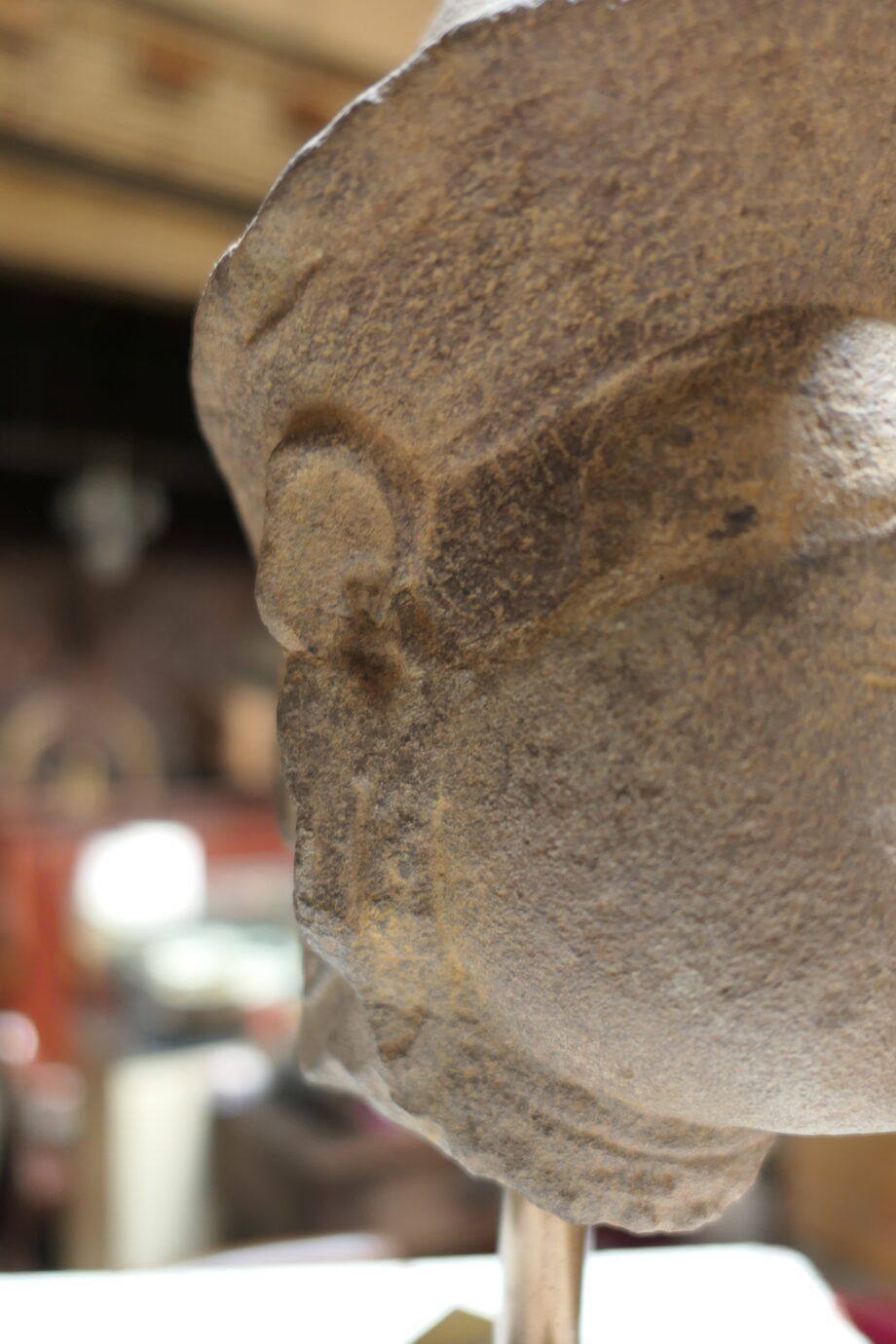 This Khmer Bodhisattva is an exquisite statue made from sandstone. The facial expression of this piece shows little details which bring peace in your work environment or even at home. Firstly, the eyes closed in Buddha statues symbolizes looking inwards towards the self, indicating to work on yourself every day until satisfied. Whereas, the smile is a motivation and believing in yourself through the process.

This traditional-looking artwork is likely to bring peace to your home,office, or religious location! It will illuminate and enchant your house with its classic design. These enigmatic qualities reflect the power of great ancient Khmer art that will easily draw the viewer into the orbit of aloofness and beauty.

Size : 9 x 9 x 27 cm
Weight : approx 3 kg
Material : Sandstone
Condition : This antique item has no defects, but it may show the imperfections that correlate with age and use.

Additional special details about the statue:

Have you ever heard about Bodhisattva?

A bodhisattva is a Buddhist deity who has attained the highest level of enlightenment, but who delays their entry into Paradise in order to help the earthbound. The bodhisattva, known in Sanskrit as Avalokiteśvara, takes both male and female forms and is associated with the qualities of mercy and compassion.

For many thousands of years, the art of stone carving has flourished in Cambodia. From the small statues made by local artisans to the famous, breathtaking carvings found at Angkor Wat, stone carving has become one of the country’s most cherished art forms. Stone carving has been both a passion and a livelihood for many a Cambodian sculptor and has, in recent decades, survived war, genocide (in which many of the country’s artists were murdered by the Khmer Rouge), and tyranny to be passed on to a whole new generation of artists.

The art of stone carving in Cambodia is one that has a very long, fascinating history which goes back to the foundation of the Khmer nation. The Beginnings of Khmer Stone Sculpture

The art of stone carving in Cambodia has roots that predate the foundation of the Angkor kingdom by many centuries. Some of Cambodia’s oldest known stone sculptures were made in the Funan kingdom (located in the modern-day south of the country), which existed in the 1st or 2nd century AD until the 6th century AD, as well as in the pre-Angkor kingdom of Chenla.

During this period of time Cambodia was exposed to a heavy amount of Indian culture due to the opening of trade routes between the Middle East and China which passed through the kingdom. This influence came primarily in the Sanskrit language, which was used in inscriptions, and in the Hindu and Buddhist faiths.

Both Hindu and Buddhist-themed sculptures from this period of time had a strong Indian influence in their delicately-carved and detailed body features, a princely disposition that still manages to remain benevolent, and body postures that feature a slight hip sway. Also, both Hindu and Buddhist sculptures were placed around temples and were often created for this purpose

Angkor Wat, one of the world’s most magnificent religious sites and Cambodia’s national treasure, was built in the 12th century AD during the reign of Suryavarman II (1113?-about 1145 AD). Angkor Wat features some of the most magnificent and famous stone carvings and murals found in Cambodia.