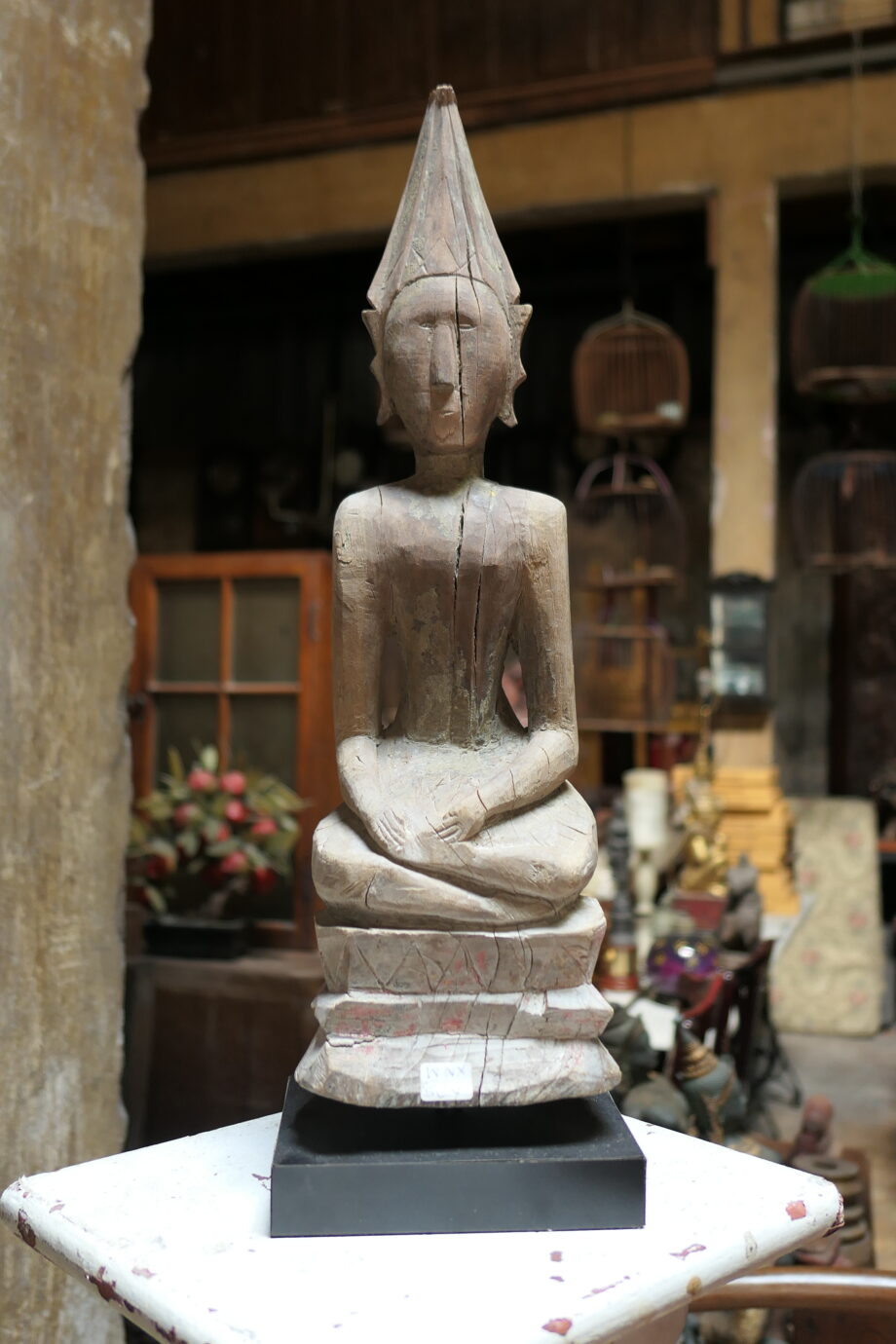 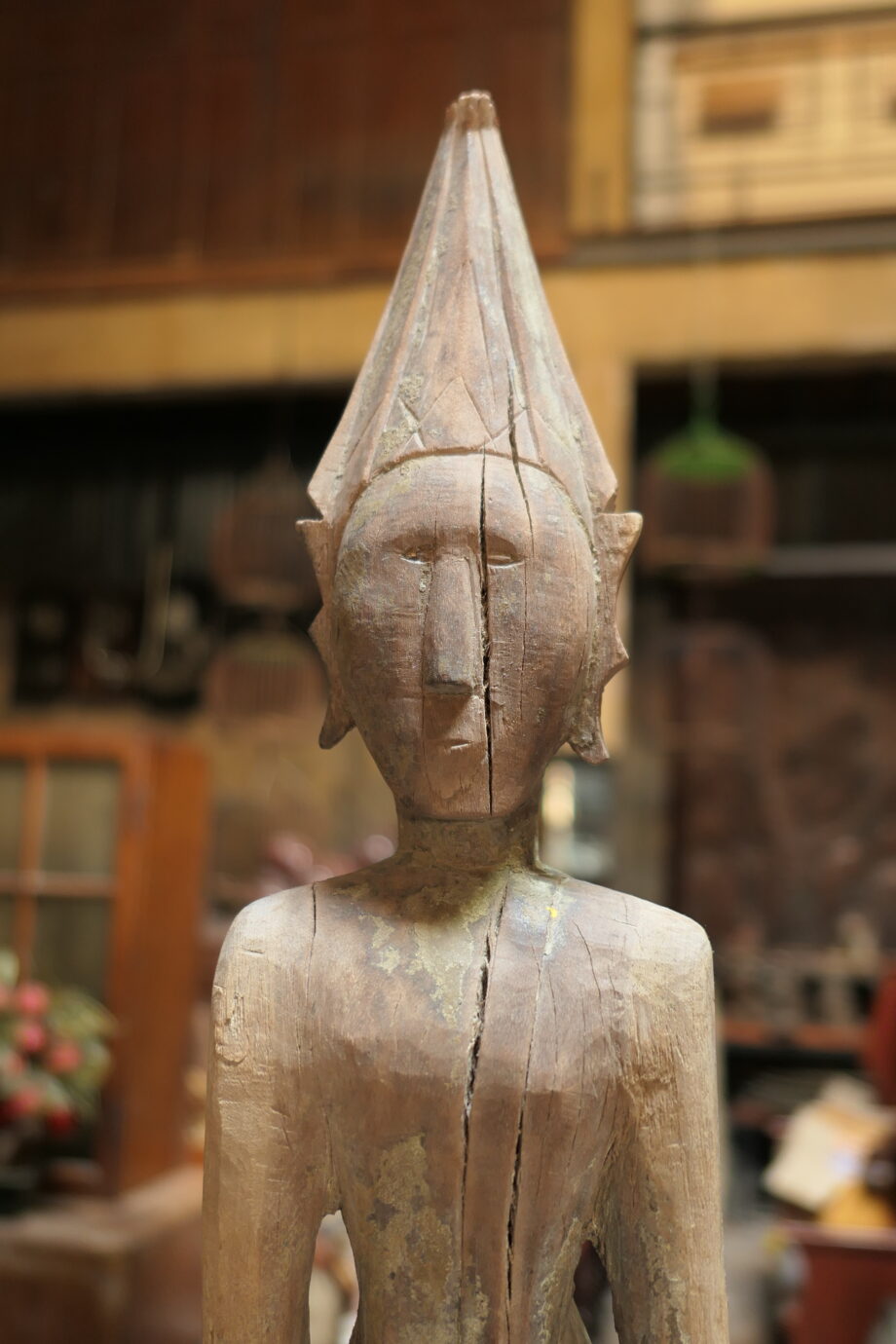 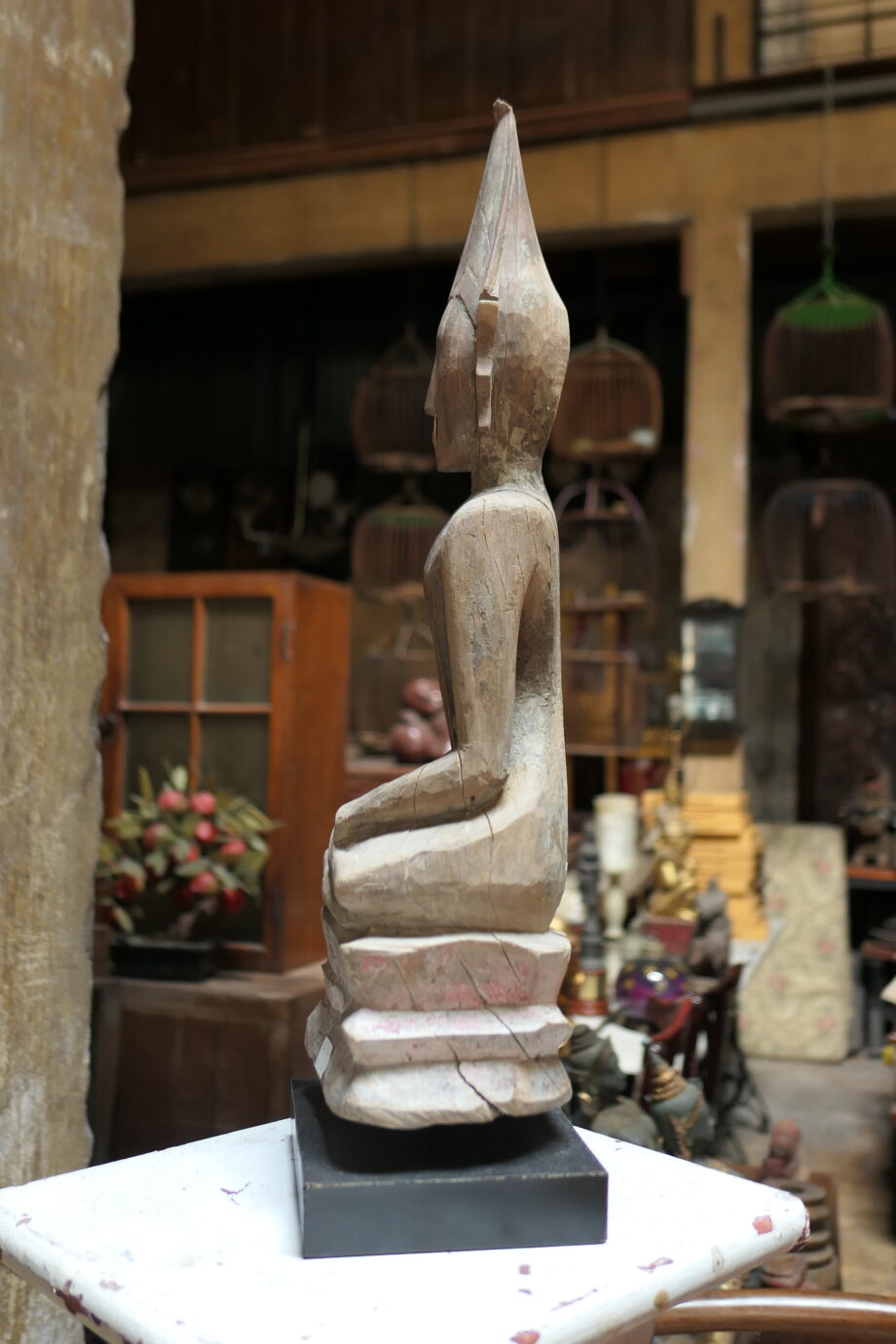 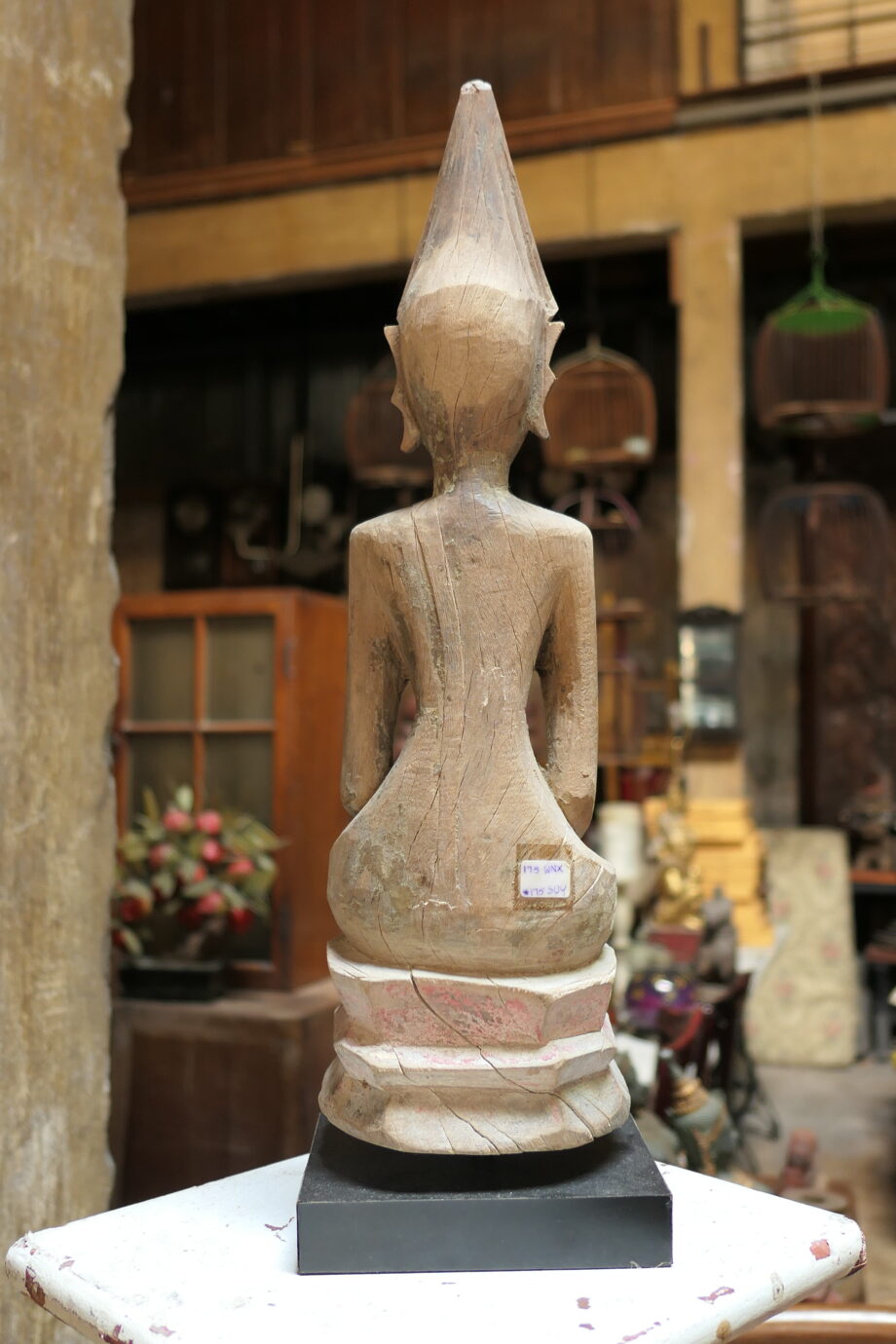 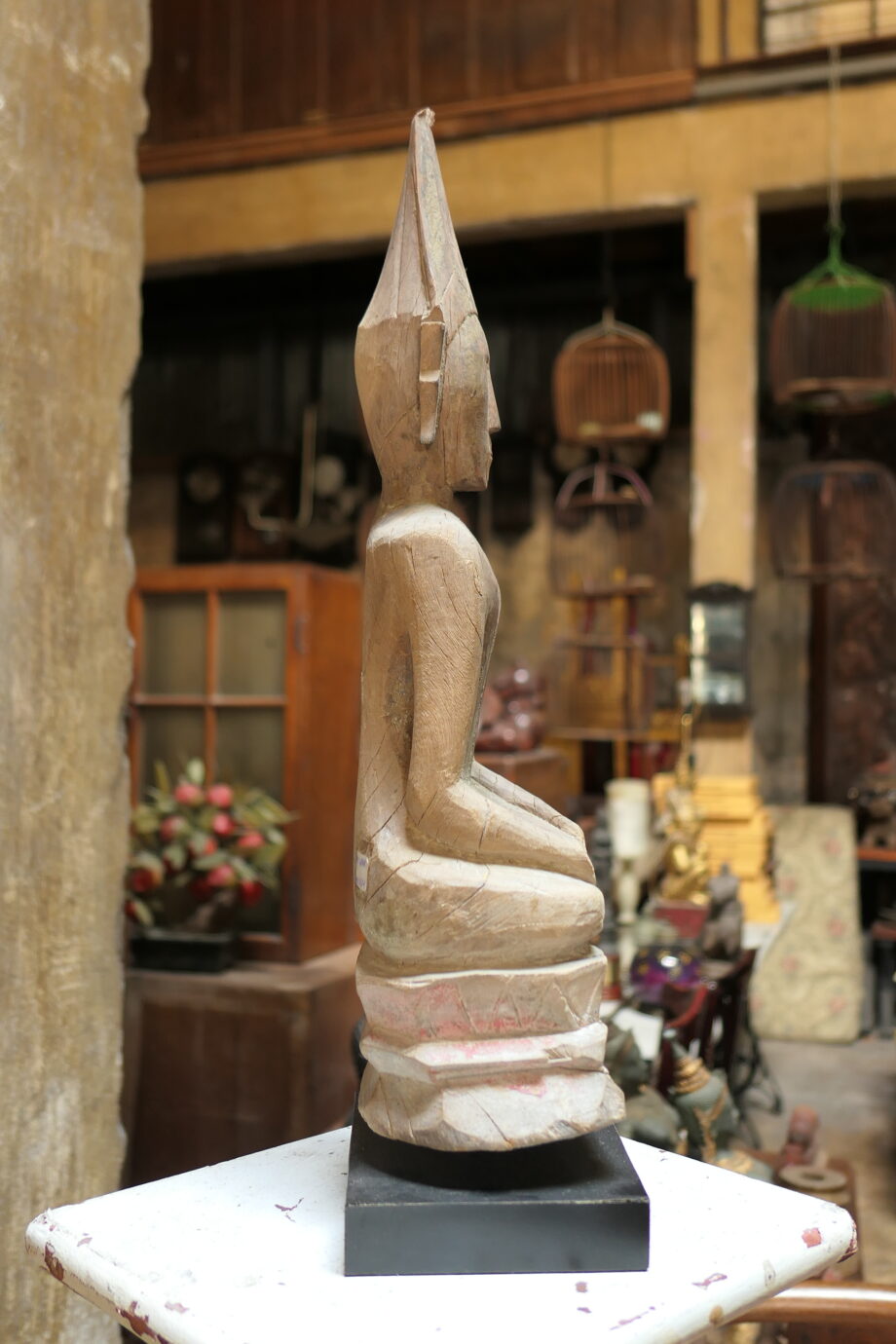 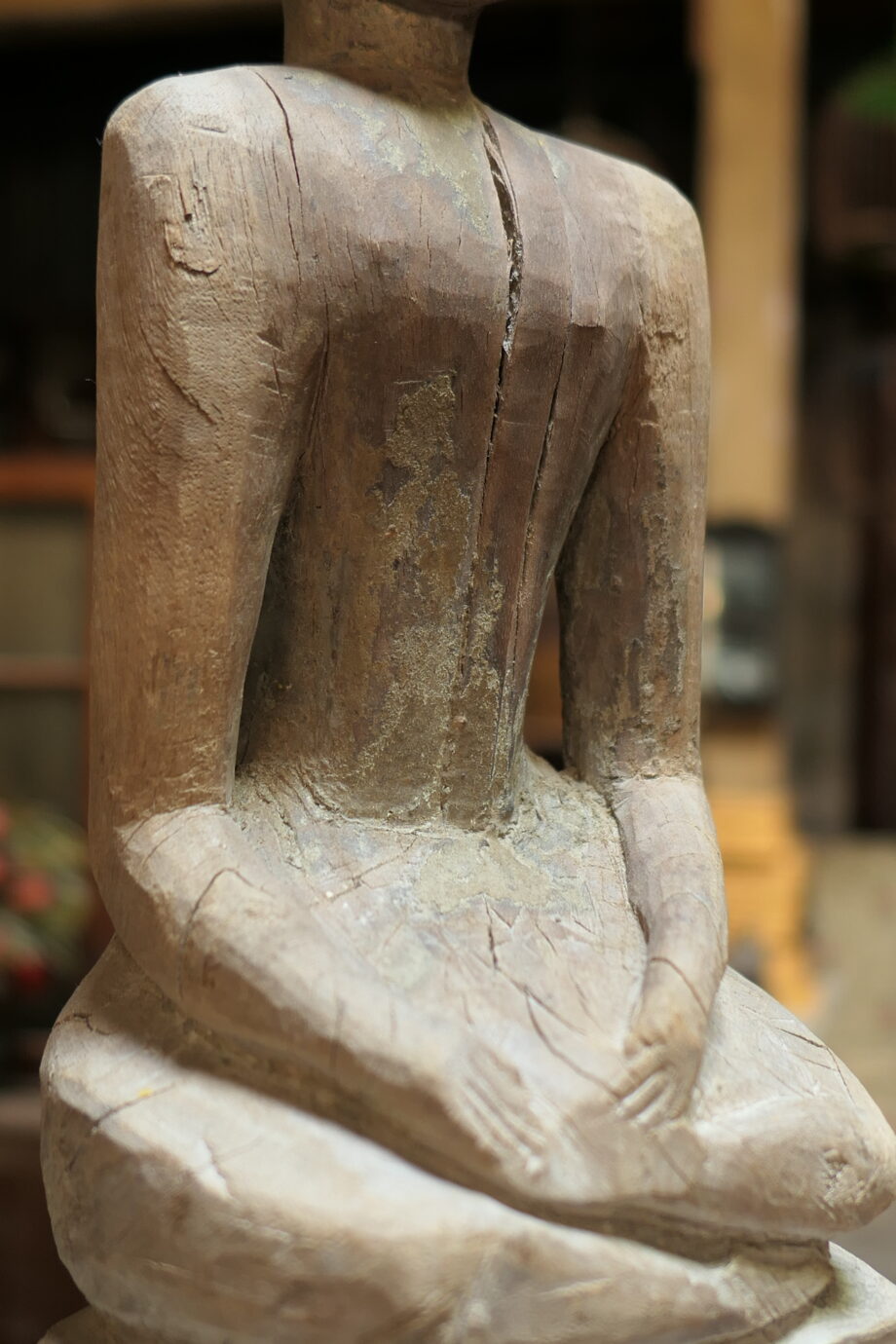 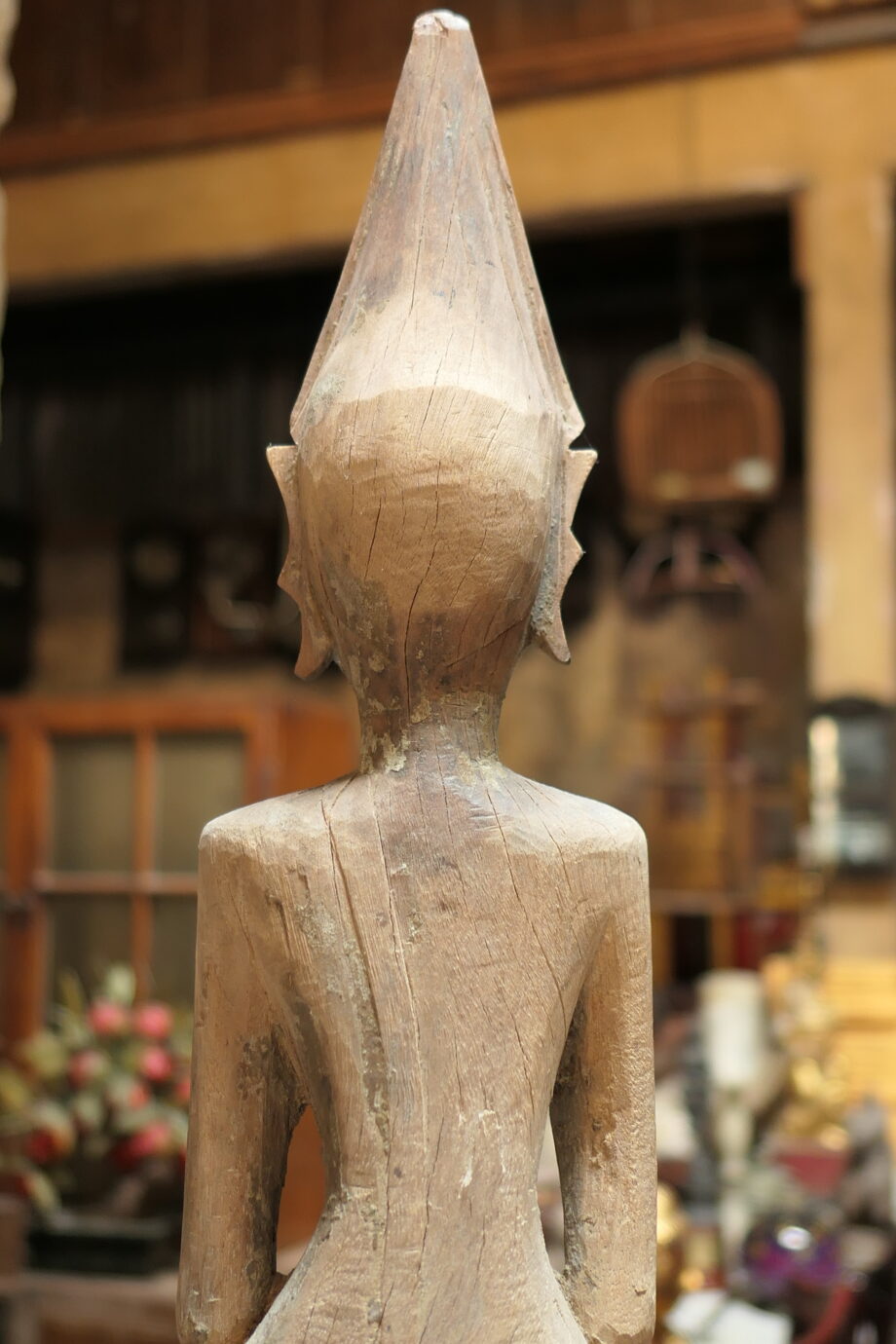 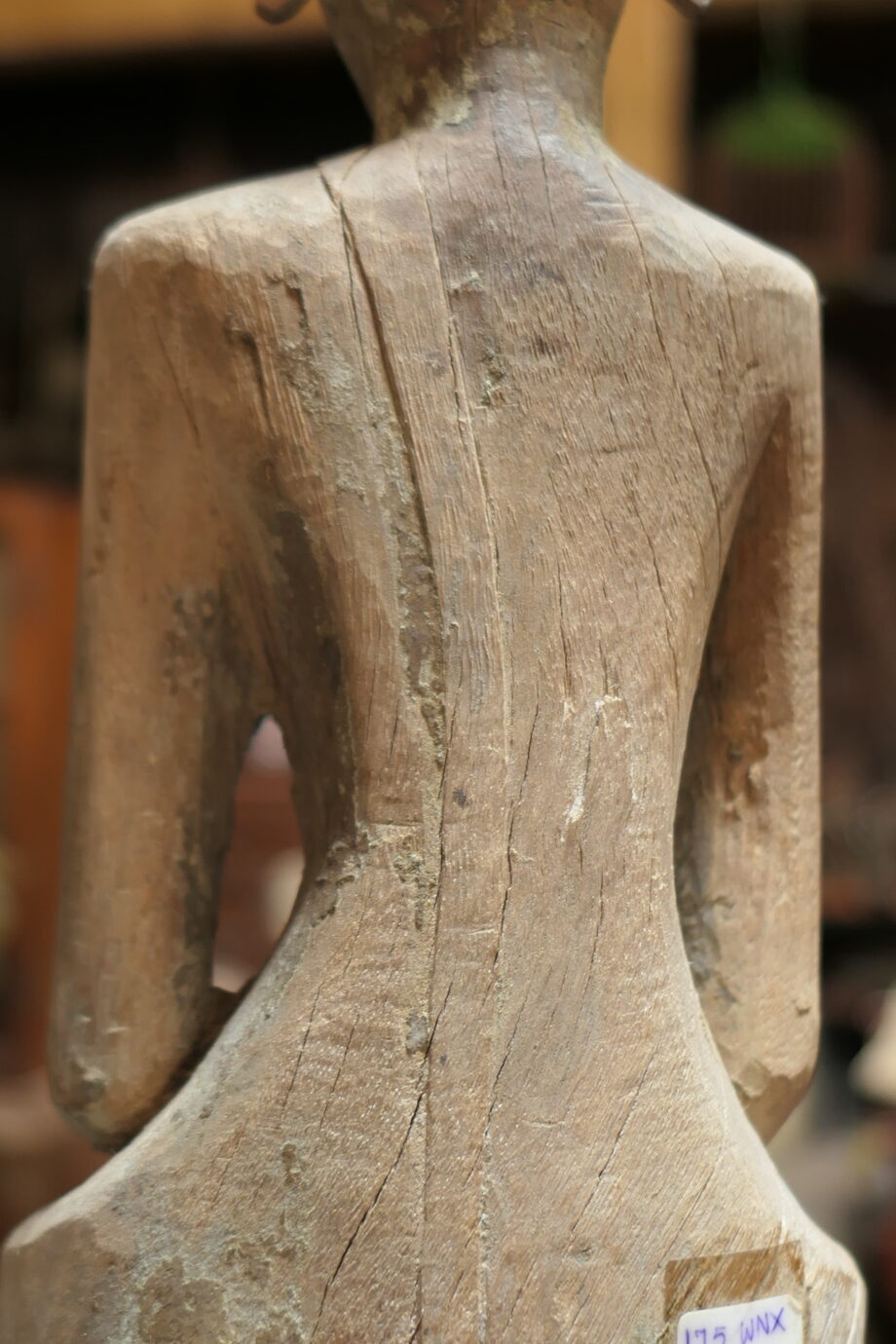 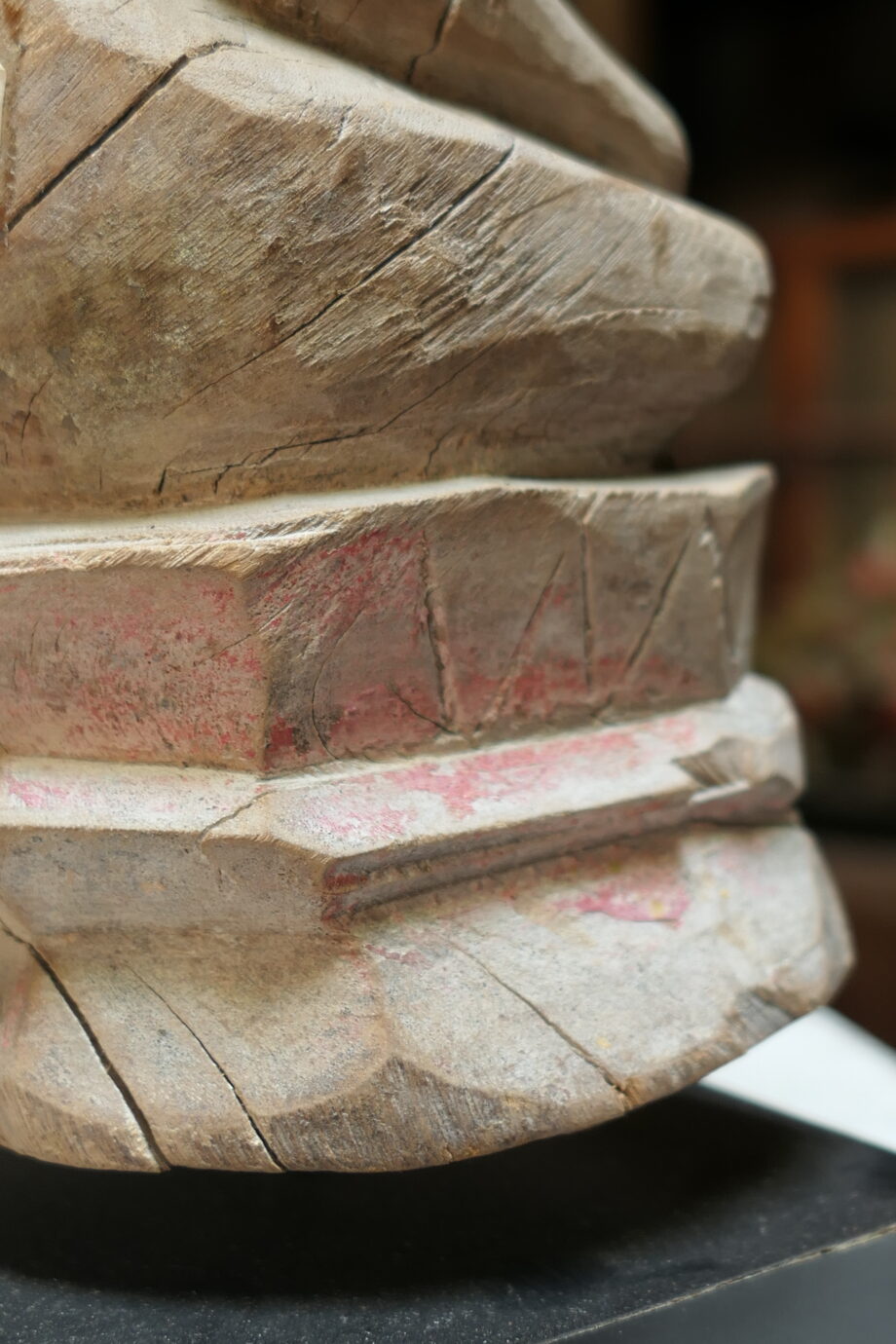 The Wooden Buddha, seated in virasana, the cross-legged emblem of serenity, with both hands in the Bhumisparsa or ‘Calling Earth to Witness’ mudra, has a calm expression, downcast contemplative eyes. On top of his head, he wears a huge long bun with a lotus flower-shaped ushnisha protuberance, symbolizing his high level of spiritual growth. His earlobes are stretched out from his days as a royal, when he wore hefty gold earrings. He sits atop a double lotus leaf base. The lotus blossom denotes purity, kindness, and spreading joy to others.

This traditional in appearance piece is sure to add serenity to your home, office or sacred space! It will enlighten and charm your home with an endlessly timeless style.

Size : 14 x 11 x 44 cm
Weight : approx 1.6 kg
Material : Wood
Condition : This antique item has no defects, but it may show the imperfections that correlate with age and use.

The Lanna Buddha seated in virasana, cross-legged symbol of Serenity, with both hands in the Bhumisparsa or ‘Calling Earth to Witness’ mudra has a peaceful countenance. He has a long-shape Anusha on top of his head which symbolizes his high level of spiritual development. His earlobes are stretched long from a youth spent as a prince wearing heavy gold earrings. He is enthroned upon a double lotus leaf base. The lotus flower represents purity, compassion and the giving of great joy to all.

Chiang Sean or Lanna refers to the Northern Thailand Kingdom period during the 12th-21th century. Lanna, meaning a million rice fields, was one of the greatest periods of the North before it was taken over by Siam. Lanna had a uniquely rich culture such as food, lilting northern dialect, charming old wooden house, and Buddha statue. Wood carving is a traditional Handicraft art work of the Lanna / Northern Thai People. It has been done for a long time from generation to generation. In the past, most of the wood carvings were made in order to cherish Buddha. But later on, people use wood carving as a decoration for their houses.

North of Thailand is abundant with forests and mountains. In their leisure time, Lanna people have thought of simulating images from various sources by using carving wood as a space to tell the story such as carving lions or The story of Himmapan wildlife or the story of Buddha.

From generation to generation, these wood carvings were put and carried out in various places such as temples, at homes, or used in auspicious occasions which wood carving has now become one of the popular product of Northern Thailand.

Have you heard about ‘Calling the Earth to Witness’ posture?

The posture “ the attitude of subduing mara “ or “Calling the Earth to Witness” is describing the Buddha posture : The left-hand lies in the lap, palm upward. The right-hand bend over the right knee, with fingers slightly touching the ground.

A short story about this posture

During the meditation, before Buddha at that time Siddhartha called success in his enlightenment. He was assaulted by a demon called Mara who attempted to lure the meditating Buddha away from the path of enlightenment. Mara has been trying many ways to make the Buddha out of his meditation, Buddha still silenced. He kept trying, then The Buddha extended the fingers of his right hand towards the ground and summoned the earth goddess Toranee to bear witness and help defend him from the attack. The goddess wrung her long hair, releasing a torrent of water that washed away Mara and his army. That’s how this posture comes from. Why are the Buddha’s ears stretched? The Buddha, a former prince, was born in Lumbini and raised in Kapilvastu (both located in Nepal), where the culture and tradition was for men to display their wealth and prosperity on their ears, must have adorned large and heavy ear jewelry made of precious metals and stones, and this may have resulted in having stretched ears, alongside the rich men of that period. It was likely he would have worn similar kind of ear ornaments from his childhood till adulthood as a sign of his wealth. Though the prince stopped wearing them when he left the palace to become an ascetic while on the search for the ultimate answer, his earlobes remained stretched. This may also be taken as the Buddha’s renunciation of the physical world. The Buddha’s long ears refer to his wealth. He was not only wealthy in terms of materialistic wealth but also in terms of his wisdom, knowledge and compassion. This particular interpretation makes reference to both of the Buddha’s noble origin as a prince and his great amount of wisdom and compassion It gives the followers the assurance that since the Buddha hears their sufferings and is fully aware of the sufferings of the world, they would not be left helpless but would be saved by the knowledge possessed by the Buddha, which will respond through compassion.

“Yaowarat Antique” located in Yaowarat Street known as the old town of Bangkok has been open for over 30 years. Started by the family of “Danvirunhavanich”. By having a passion for collecting little antique items such as old stamps, and antique toys into Benjarong or Porcelain plates. Then Mr.Danvirunhavanich began to open his own antique shop which at first named “Chiva sart” meaning “The lesson of life”. After the retirement of Mr.Danvirunhavanich, “Tee” known as “Tee Yaowarat” : son of Mr.Danvirunhavanich has taken over to take care of this antique shop. Yaowarat Antique Shop is a popular-oriented antique store among Bangkokian people. Many of their antiques have a unique southeast Asian and Thai style. For those who love Asian antiques, once you come to Bangkok, it’s a must to visit this place!