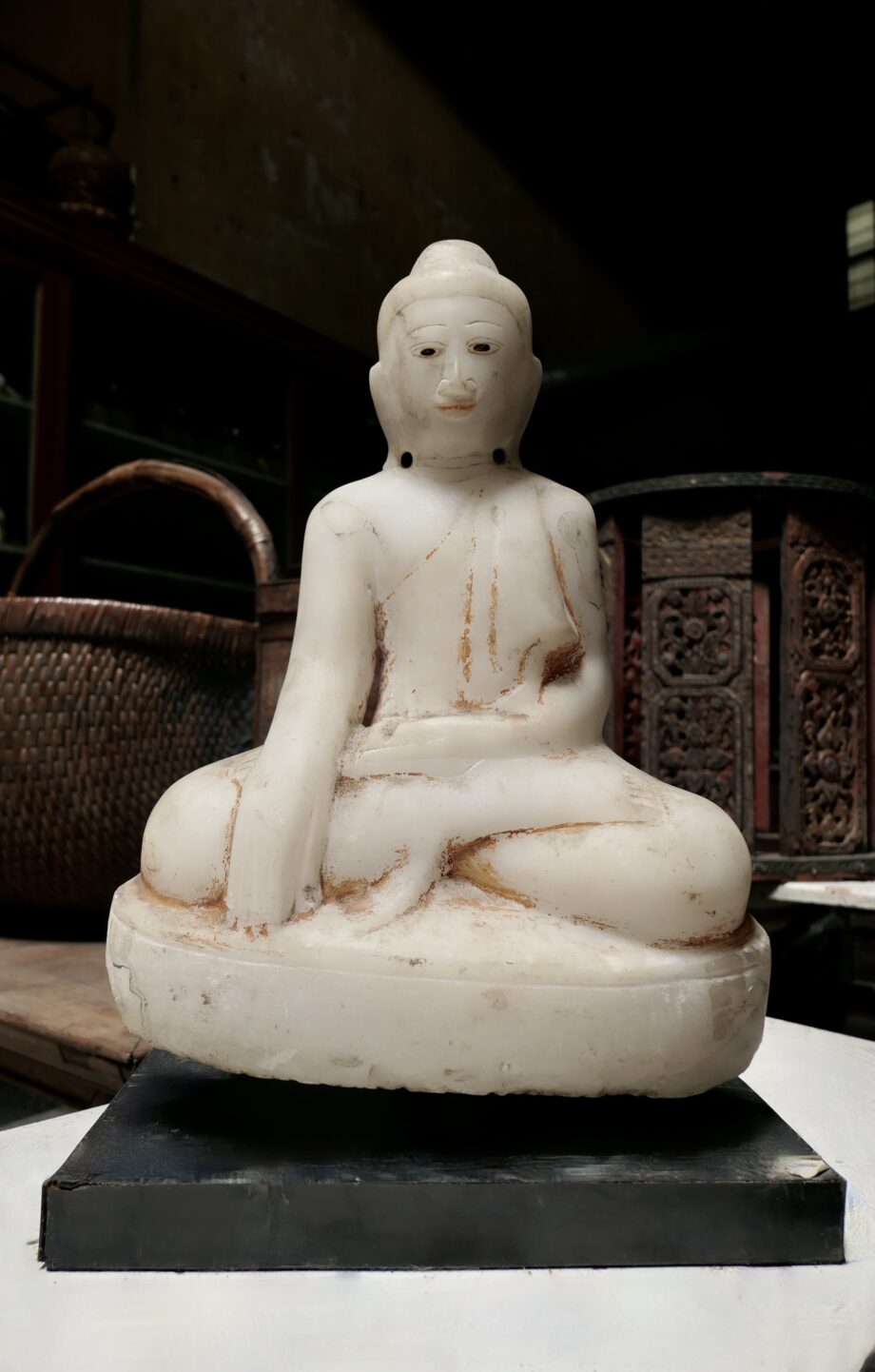 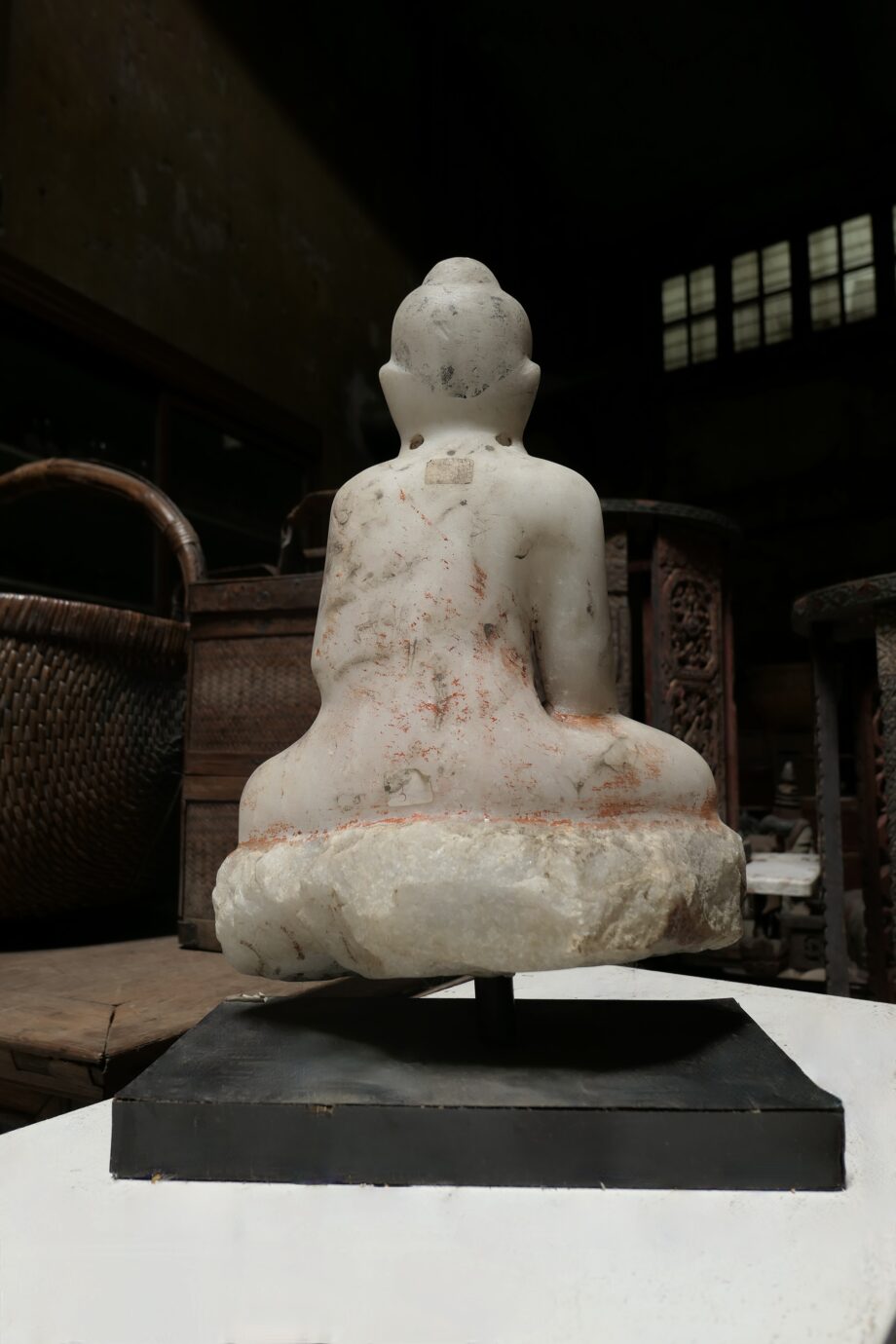 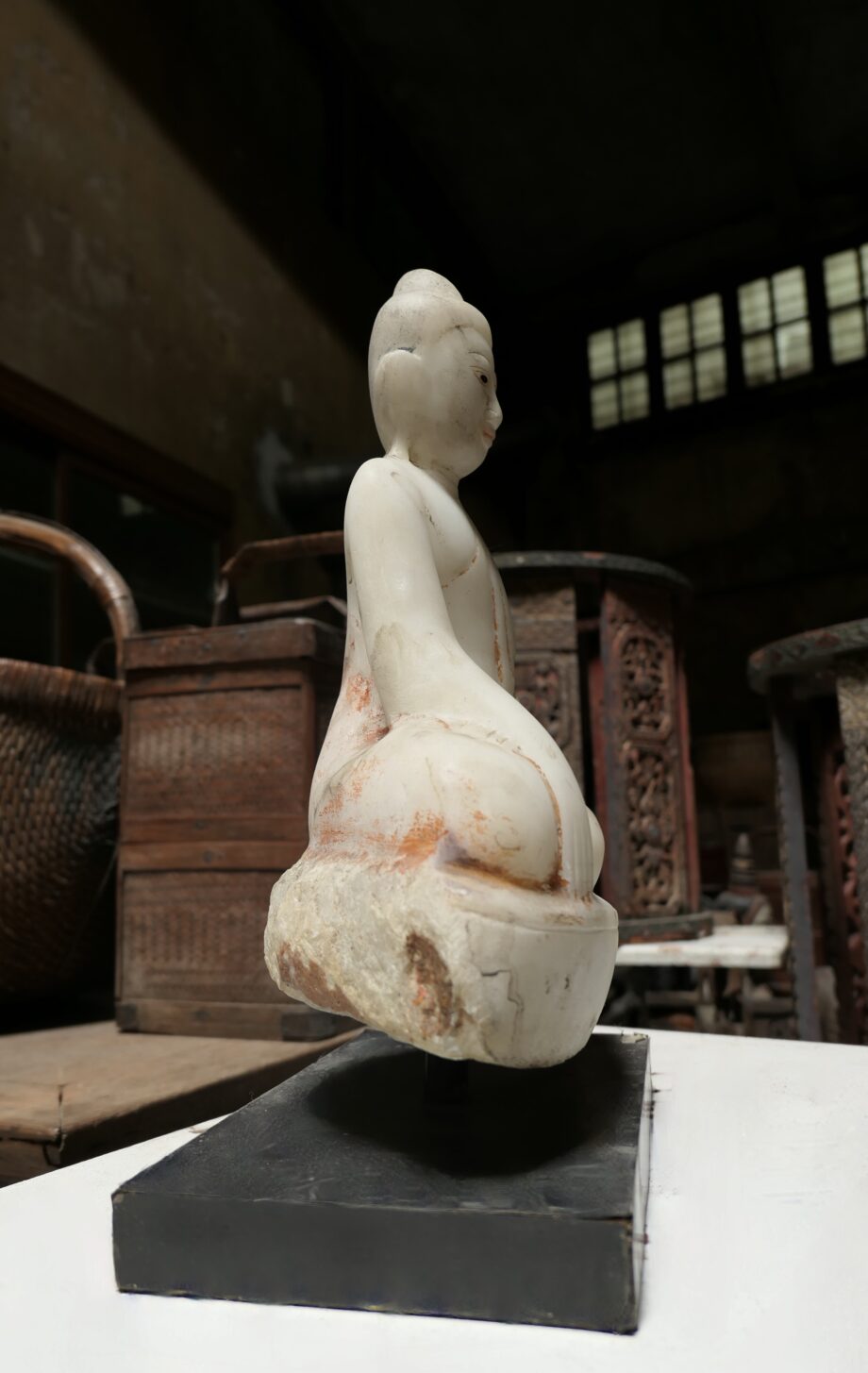 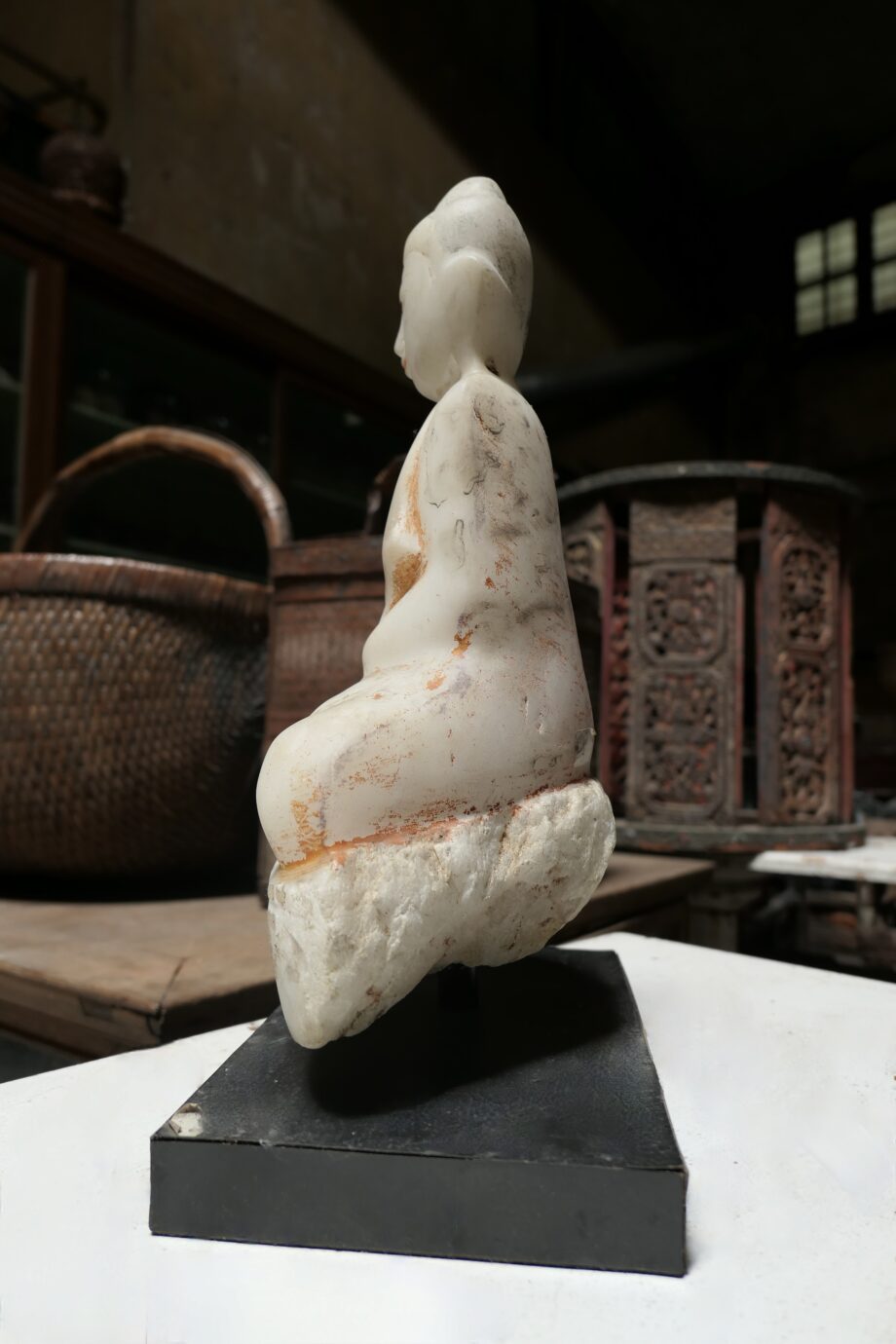 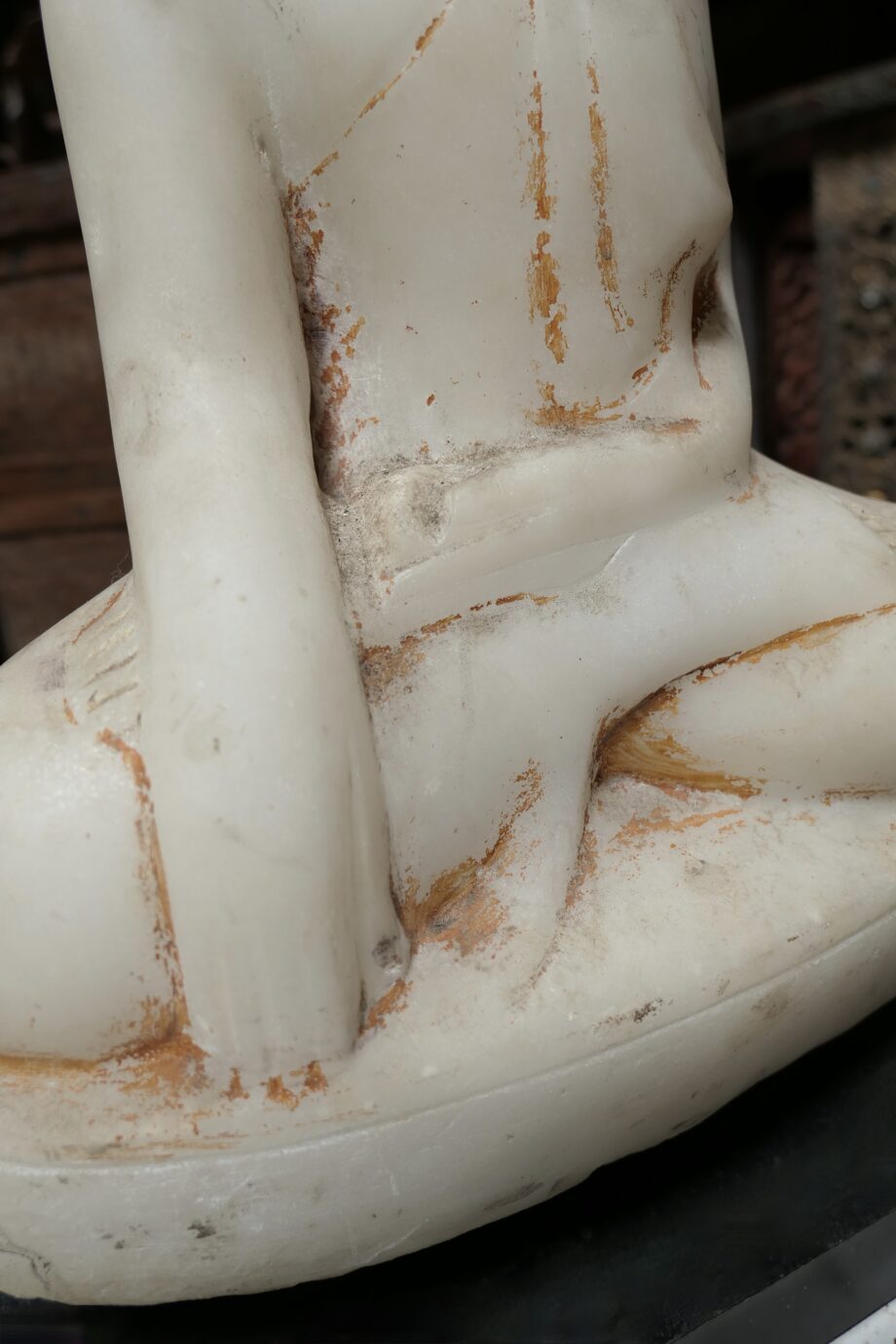 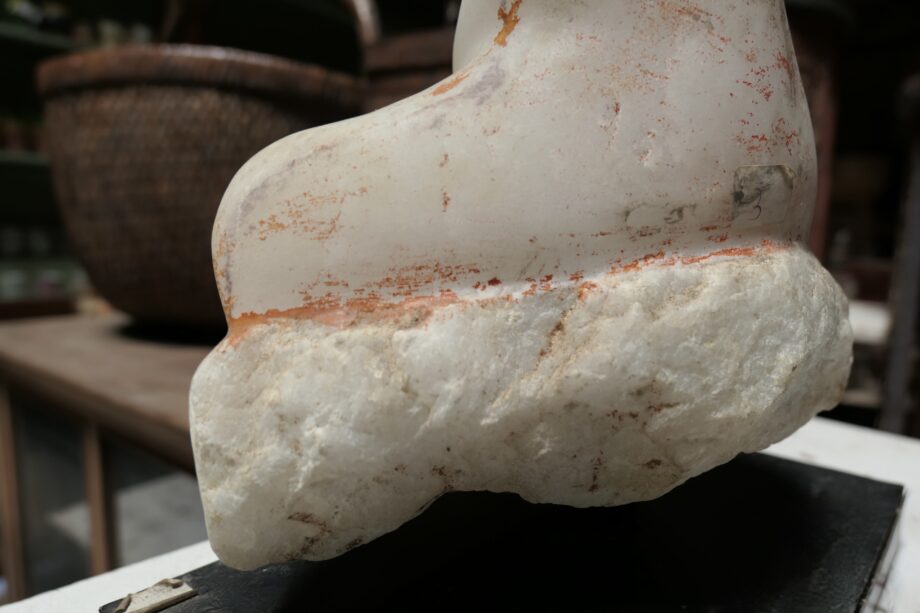 This Craved Mandalay Marble Buddha Statue is in a cross-legged posture, symbol of Serenity, with both hands in the ‘Calling Earth to Witness’ mudra gesture has given a peaceful mysterious power. His introspecting eyes and a firm brow and his earlobes are stretched long down to the shoulder symbolize his high level of spirituality.

This traditional in appearance piece is sure to add serenity to your home, office or sacred space. One of the most recognizable of the Asian deities this representation of the spiritual teacher Buddha is sure to enlighten your home with an endlessly timeless style.

Size : 26 W x 14 L x 36 H cm
Weight : approx 7.5 kg
Material : Marble
Condition : This antique item has no defects, but it may show the imperfections that correlate with age and use.

Get to know Mandalay Period

Mandalay was considered the center of the Buddhist universe in Myanmar. King Mindon moved the capital from Amarapura to this new site and called it the city of Mandalay. Tradition maintains that Gautama Buddha visited the sacred peak of Mandalay Hill with his disciple Ananda, and proclaimed that on the 2400th anniversary of his death, a metropolis of Buddhist learning would be founded on the plain below the hill. The political center of this new city had the perfect geometrical form of a Buddhist Mandala, for which the city was named, Mandalay.

The Mandalay period ends at the time when the Burmese gained their independence from the British. Mandalay was considered the most beautiful and popular art in Burma and thus Burmese Art prospered and developed in this era. The styles of Mandalay Buddha Images and Buddha statues were many since King Mandon. A devout Buddhist, had filled Mandalay with them and through the years Mandalay art became established as the pure art of Myanmar. 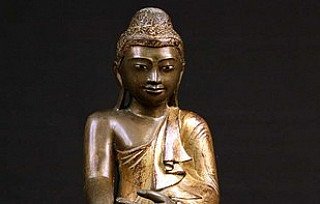 The art of marble carving in Burma

In Burma, marble is called Sagyin, which derives from Sagyin hill. Originally Sagyin is the name of the village in Madaya Township, 21 miles to the north of Mandalay.

A mountain range consists of 7 hills – four to the north and three to the south of village. Because of the mountain range lies near Sagyin Village, it acquired the nameSagyin Hill and the marble stone produced are called Sagyin stone. As the Sagyin Hill range is an offshoot of the mountains of Mogok, the world’s best ruby land, there are some ruby mines in Sagyin Hills. But the hills are more well-known for their marble which varies in colour from pure white to bluish grey. Marble blocks are carefully carved into Buddha images of different styles and sent to Buddhist monasteries all around Burma.Nowadays more work is done by machines, but in the past everything was done by hand. Have you heard about ‘Calling the Earth to Witness’ or ‘Subduing Mara’ posture?

The posture “ the attitude of subduing mara “ or “Calling the Earth to Witness” is describing the buddha posture: The palm of the left hand is facing up in the lap. Right hand bent over right knee, fingers softly brushing the ground.

A short story about this posture

During the meditation, before Buddha at that time called Siddhartha success in his enlightenment. He was assaulted by a demon called Mara who attempted to lure the meditating Buddha way from the path of enlightenment. Mara has been trying many ways to make the Buddha out of his meditation, Buddha still silenced.  He kept trying, then The Buddha extended the fingers of his right hand towards the ground and summoned the earth goddess Toranee to bear witness and help defend him from the attack. The goddess sent a torrent of water from her long hair, washing away Mara and his army. That’s how this posture comes from.