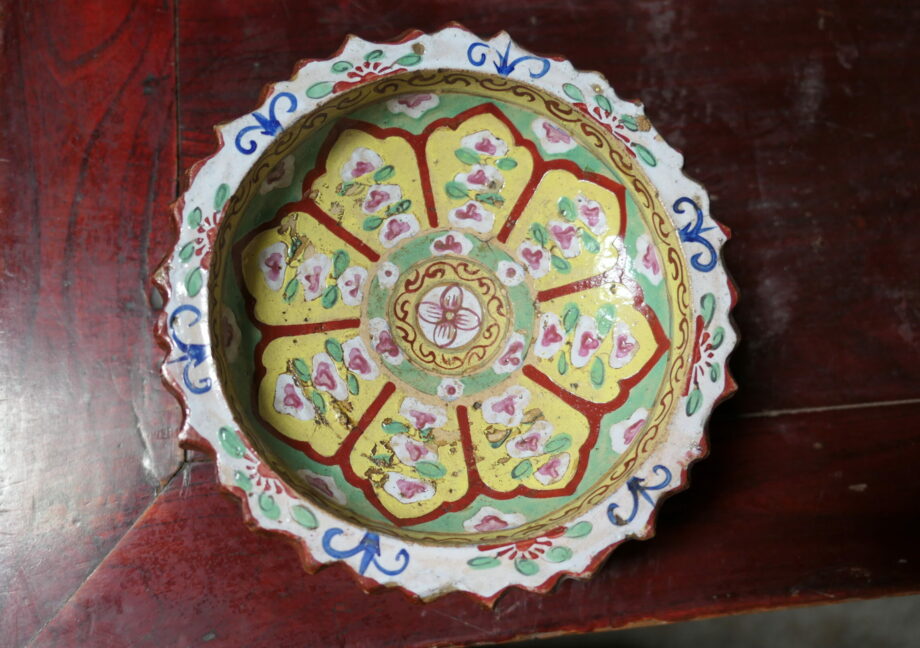 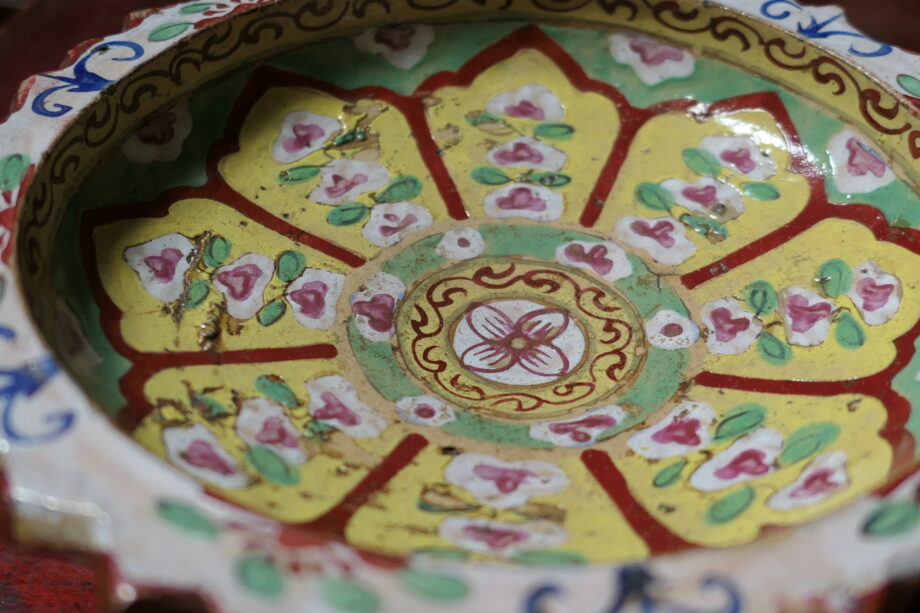 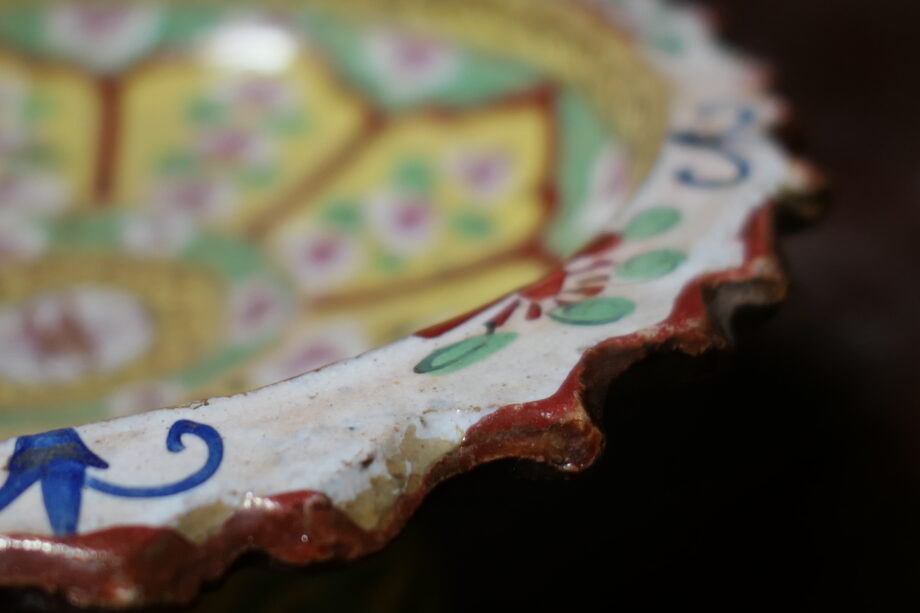 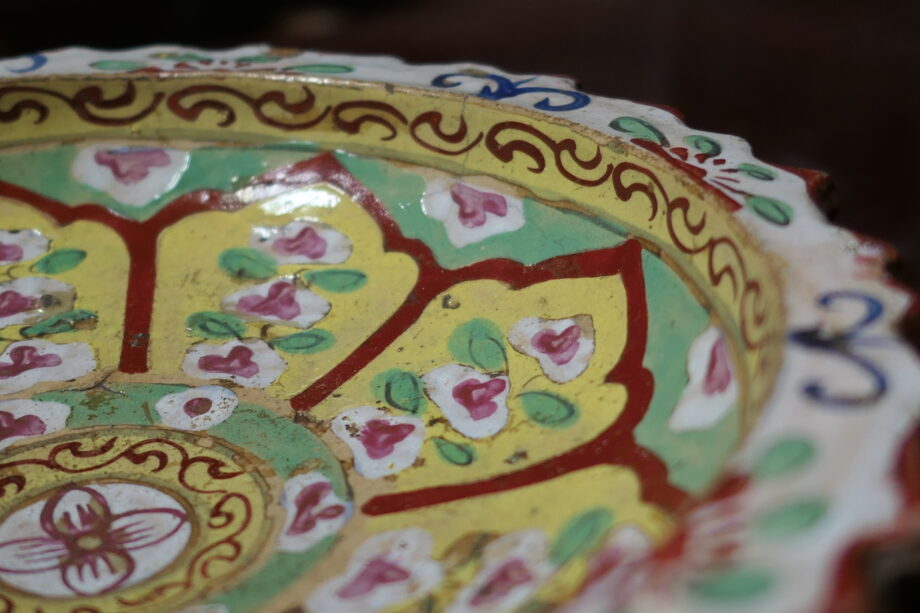 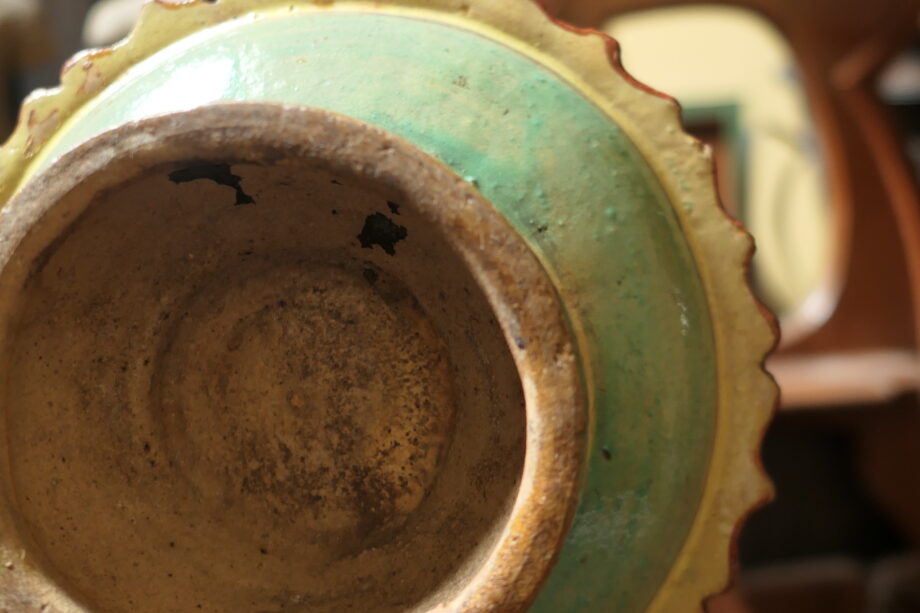 An antique Benjarong stem dish with a pattern that is inspired by the Thai flower pattern and finished with Benjarong colors. The floral pattern mixed with the Thai Ayutthaya style motif is uniquely designed and painted with Thai craftsmen.

Despite its decorative appearance, this stem dish is strong! It can be used as a tableware in your house or your restaurant to give a sense of Thai style. The stem dish is made from high quality ceramic.

Size : 19 x 7.5 cm
Weight : approx 1 kg
Material : Ceramic
Condition : This antique item has no defects, but it may show the imperfections that correlate with age and use.

A 300 years old antique Benjarong Stem dish with a pattern that is inspired by the Thai flower pattern and finished with Benjarong Color. The floral pattern mixed with the Thai Ayutthaya style motif is uniquely designed and painted with Thai craftsmen.

Despite its decorative appearance, this stem dish is strong! It can be used as a tableware in your house or your restaurant to give a sense of Thai style. The stem dish is made from high quality ceramic.

Benjarong is a traditional form of painted Thai ceramics porcelain. Benja means five and rong means color. In the past, the primary colors in Benjarong were black, green, yellow, red and white. Nowadays, since the patterns have been developed to the stories from Buddha’s biography and Thai culture and tradition, more colors are required, and now the craftsman have over 16 colors to work with.

Benjarong may have been introduced to Thailand by the Chinese. Painted designs on white porcelain originated in China during the Ming Dynasty (1368-1644). In the early days, Benjarong porcelain was made only for the royal court and the aristocracy. Benjarong has been in production for hundreds of years and takes great talent to make Benjarong. Only a very few select artists can make them and it takes them days just to complete a single items! Benjarong ware was produced exclusively for the Thai market during the Ayutthaya period and throughout the nineteenth century. Many people believed that Thais ordered white-glazed ware from China, which was then decorated by Thai artisans, and then sent back to China for final production under the supervision of Thai artisans.Therefore, Thai Bencharong ware had typical Thai designs and motifs.

The word Bencharong, meaning “five colors”, was the name of a ceramic group enameled with three to eight colors. The five most popular colors used on early ware were red, yellow, black, white and green, while other colors employed to decorate Bencharong ware of the later period were pink, green,purple, blue and reddish yellow. Sukhothai was the first Siamese capital of Thailand and was founded in 1238. Ayutthaya was later founded in 1350, but it did not become a thriving city until about 1378. It remained the flourishing capital for about 400 years (until 1767). Sukhothai took a back seat to the thriving new capital and was, for the most part, forgotten. It was put back on the map by Rama I, when he used ancient Sukhothai artifacts to enrich and decorate his temples in Bangkok during the Chakri dynasty.

Ayutthaya remained the capital for so long for a number of reasons. For one, it was home to an extensive trading port that welcomed international merchants, many of whom were from Europe. The city was a memorable one to these travelers because of the many temples and palaces found here. In addition to trading, the waterways that surrounded the city were useful in terms of protecting it, creating a watery fortress of sorts.