SAC Gallery was founded by Subhashok Angsuvarnsiri in 2012 as an art space with more than a thousand square meters across four floors in the heart of Bangkok. SAC Gallery seeks to develop the career of Thai and Southeast Asian artists on an international level through engaging in-person and digital programming as well as regular participation in art fairs throughout the world.

Unlike traditional gallery spaces, SAC gallery promotes a friendly and welcoming experience for all visitors and their staff are always on site to assist. Private tours are very welcome with advanced booking. SAC are constantly engaging with the local community, with regular workshops and education programs throughout the year.

From abstract paintings to mixed media installation, the latest exhibition of talented Korean artist
Gi-ok Jeon explores her surrounding environment and daily-life scenario. The series of works
genuinely invites audiences to an artistic journey along with the artist’s story through a colorful life
atmosphere. Influenced by an ancient Chinese calligraphy technique, Jeon’s works combine the
dominant identity of western art with trails of eastern touch – illustrating an artistic dialogue of two
aesthetics on the surface of her contemporary art.

life. The paintings are here seen as the artist’s second world, overlapping territorially with her real-
life events.

Through the history of Abstract art, paintings are mostly seen by Formalism aesthetic which
focuses on actual form and matter of work – metaphor as a physical body and inner soul of artwork.
Besides the form of the paintings, the matter of works unveils her full flavor of life as the artist,
mother, and wife. Even though a connection of form and matter has raised many questions to art

historians about its consistency, Jeon’s work still remarkably indicates the harmony and balanced
life of the artist. Jeon concurrently reveals the relationship between artistic performance and
actual life by painting geometric shapes on the surface with Chinese brush or playing with various
art techniques descended from previous eras.

Calligraphic brushstroke, as a spontaneous automatism practice, has become a basic language
for an abstract art movement. While some western art was influenced by the eastern aesthetic,
Jeon as an Asian artist also adapted the occidental technique to her works. She reveals an
opposition between forms, geometry, colors, and other visual elements through her brush. Her
rapidly spontaneous strokes on the first layer of the surface are repainted by refined and precise
finishing.

West or east – the artistic influences from both sides embed a political context to the artworks.
The intercultural experience of the artist that does not belong to any place or culture, also shows
a significant perspective. The exhibition is seen as a personal record for the artist who moved to
live and work in an unfamiliar culture. This intercultural phenomenon is fabricated in the matter of
her artistic journey.

Apollo and Daphne exposes special characteristics of Jeon’s spontaneous expression and
comprehension of aesthetics. Her abstract paintings appear with contrasts of elements and
media installation imbues with skillful technique, while her Western aesthetics flow back and forth
with eastern sensibility, thus making a blurred line on the boundary between crafts and high art,
giving a sense of joy to the audience. 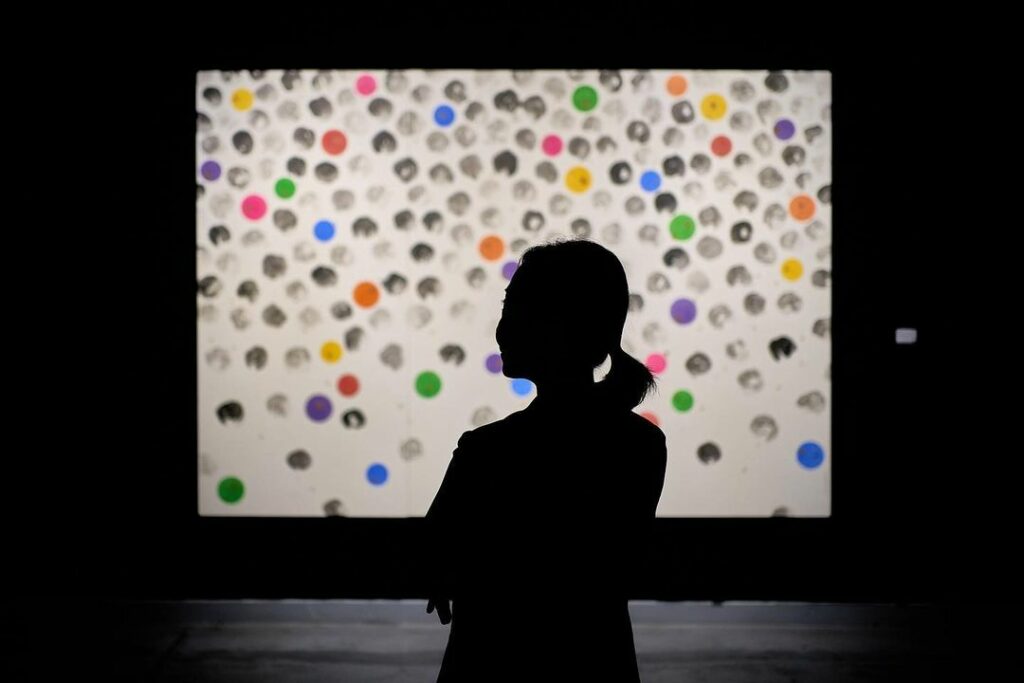 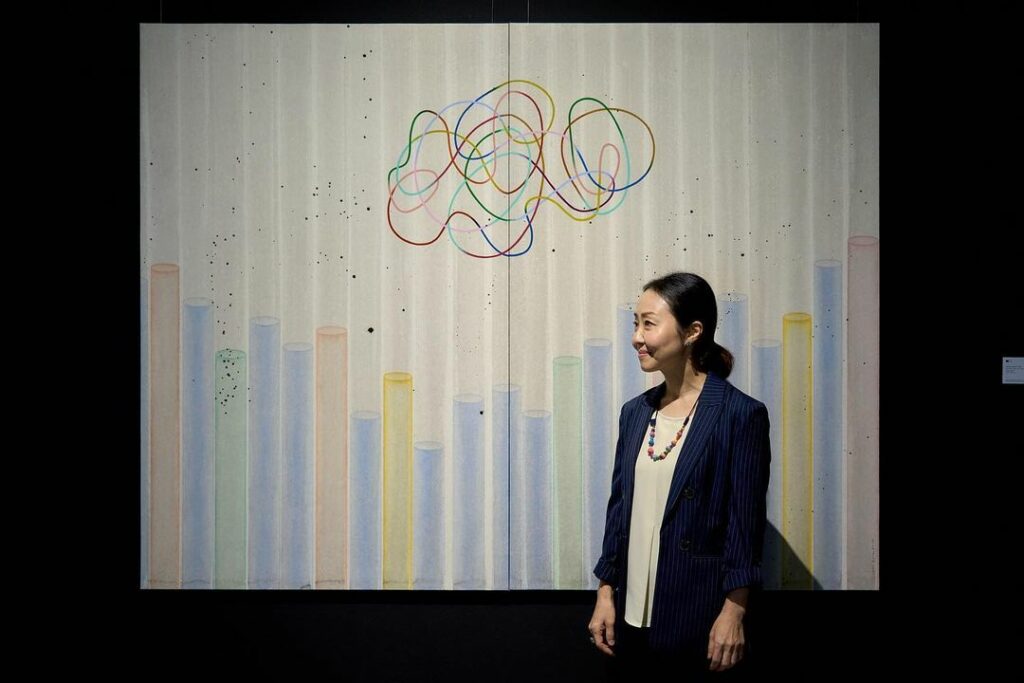 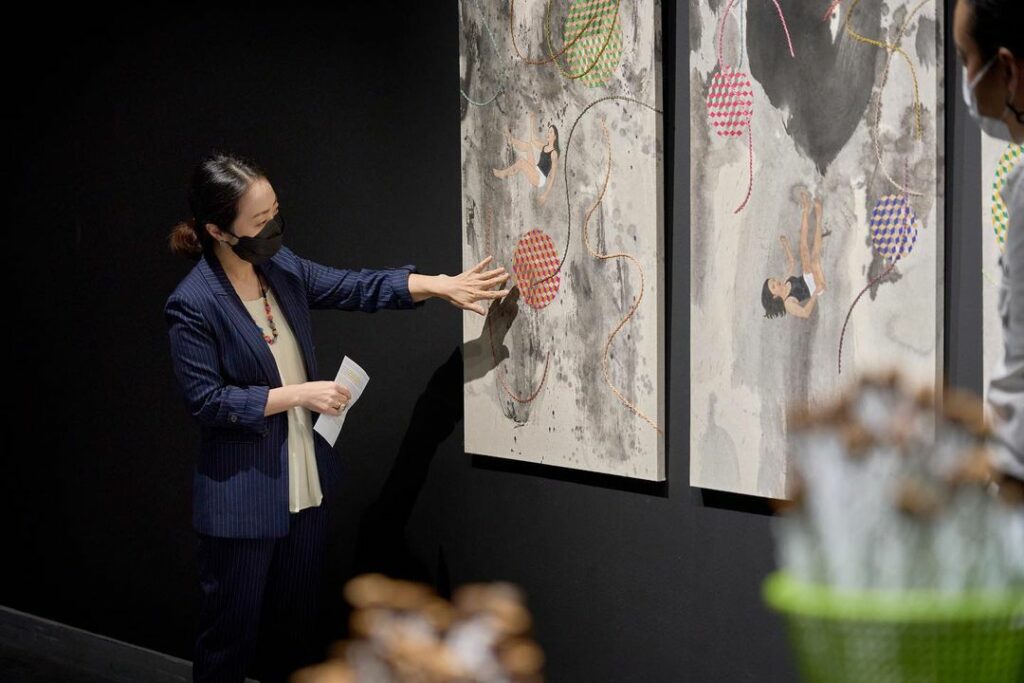 Gi-ok Jeon was born in South Korea. The artist graduated in fine arts from Seoul with her bachelor’s degree and renowned Beijing Central Academy of Fine Arts for her master’s degree. Jeon moved to Bangkok and art print techniques at the Visual Arts department, Faculty of Fine and Applied Arts, Chulalongkorn University.

Jeon is a mixed-media artist who brings new ideas together with various art techniques: embroidery, wood-cut, drawing, and fabric weaving.
Through the years of her studies and experiences in practicing, Jeon has presented her ideas about identity in multi-cultures society, motherhood, and daily life, influenced by Korean culture, Chinese aesthetic, and life in Thailand. Jeon made her solo exhibitions at Beijing International Art Palace Museum in 1998. In addition to group exhibitions, Korean Pavilion at the Shanghai International Paper Art Biennale (Shanghai),her works were installed at the Korean cultural center (Bangkok), Mu Project (Washington D.C.), and Central Academy of Fine Arts (Beijing).

For additional information about exhibitions and paintings and inquiries about purchasing, please click the button below to send your inquiry.